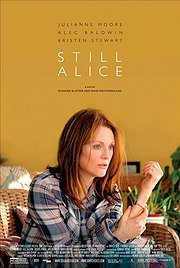 There are certain performances that immediately grab your attention and have Best Actor written all over them. Some have included Philip Seymour Hoffman in "Capote", Forrest Whitaker in "The Last King of Scotland", and Cate Blanchett in "Blue Jasmine".

Now Julianne Moore has joined these ranks of unbeatable actors --- she is destined for the gold statuette come February 22, 2015. Ms. Moore portrays Alice Howland, a world-famous linguistics professor who teaches at Columbia University and resides in New York City with her equally successful physician husband, John (Alec Baldwin). She begins forgetting words, of all things, and receives a diagnosis of Early-Onset Alzheimer's Disease at the age of fifty.

Based on the book of the same title by Lisa Genova, the screenplay was adapted by Wash Westmoreland and Richard Glatzer, who also both directed. Glatzer, himself recently stricken with ALS, was very moved by Genova's writing, so despite his afflictions, he and Westmoreland knew they had to tackle making this film.

Moore's performance is reminiscent of Julie Christie's Alzheimer patient in "Away from Her" (2006), but because of Alice's age, it's even that much more devastating. Alice and John have three grown children, Anna (Kate Bosworth), who is married and pregnant, Tom (Hunter Parrish), a medical student, and Lydia (Kristen Stewart), who refuses to attend college and is living in LA struggling to become an actress.

Each deals with their mother's heartbreaking illness differently, and compassionately, but it is Lydia who steps up to the plate to care for her mother. As one can imagine, "Still Alice" is abounding with heart-wrenching scenes, but it never overplays the sentimentality. It's an extremely realistic portrayal of a woman and her family in crisis, without the histrionics that usually accompany such tales.

Much is being written about Marion Cotillard's acting in "Two Days, One Night", but I found hers to be the unrealistic portrayal. Whereas Moore is amazingly calm and courageous in her role, battling a death sentence with tremendous fortitude. As I stated earlier, she should be a lock for Best Actress.

Baldwin is also very strong as the loving, but ultimately clueless, husband. Though I have always considered Stewart to be an acting dilettante, as Lydia she comes across with much more depth to this role than ever before. She has more than a few meaningful scenes with Moore.

Please do not let the subject matter dissuade you from seeing this touching film. A performance as perfect as Moore's deserves to be seen.

Oscar voters love actresses in turmoil, and that goes double for women associated with severe maladies. Consider these past Academy Award winners: Hilary Swank was a quadriplegic who wanted to die in "Million Dollar Baby"; Jane Wyman played a deaf-mute in "Johnny Belinda"; and Anne Bancroft won for bringing deaf-dumb-and-blind Helen Keller (Patty Duke) out of the darkness in "The Miracle Worker".

This year we have Julianne Moore, a five-time Oscar nominee, who ought to be practicing her acceptance speech for her astounding performance in "Still Alice". As 50-year-old Alice Howland, a brilliant linguistics professor, wife and mother, Moore 's shattering turn as an early-onset victim of Alzheimer's is pure gold.

Based on the novel by Lisa Genova, co-writers/co-directors Wash Westmoreland and Richard Glatzer give their audience obvious hints early on that something is not quite right with Alice. She can't remember words to speeches she normally could present in her sleep. She forgets meeting her son's girlfriend to whom she was introduced moments before. Later, there are more blatant signs, as in one pitiable scene where Alice can't locate the bathroom in her own home.

Alice knows something is amiss with her mind, but she tries mightily to hide things from her husband, John (Alec Baldwin), and  her three children, Tom (Hunter Parrish), Anna (Kate Bosworth), and Lydia (Kristen Stewart). Once her diagnosis is confirmed by Dr. Benjamin (Stephen Kunken in a sympathetic, terrifically understated performance), the movie shifts to the family dynamics. How will they each handle the news?

The entire cast is excellent, particularly Baldwin as the supportive husband, and Stewart as the youngest daughter who seems to be the most conflicted by her mother's dire situation. It's a story with which the majority of moviegoers can empathize, given the terrifying aspects of the disease. That, and the supposition that most people probably know at least one person suffering from the illness.

Julianne Moore, as Dr. Alice Howland, evokes the heartbreaking reality of this dreaded condition. Yet through it all, she is "still" Alice, and that's why Moore is a lock for the Academy Award.