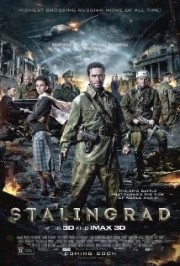 The setting is late 1942. The city of Stalingrad, Russia is in total shambles, devastation as far as the eye can see. The German army is desperately seeking to overrun a small band of Russian soldiers so they can advance to a key strategic position to dominate the area. The Russians are presented as the underdogs, and the more sympathetic of the two sides  --- no surprise there.

"Stalingrad" is not a classic war movie in the sense of "Saving Private Ryan" or "Schindler's List". Told from the point of views of both the Russian and the German armies, it is an extremely violent take on the harsh realities of war. The basic philosophy is "kill or be killed" without regard for human life.

Except for some brief present-day scenes that open and close the movie, the majority of the film takes place in two battered buildings in the heart of the city, each one occupied by small bands of soldiers from either side. But those opening scenes should not be minimized. They are harrowing depictions of five young people trapped under the debris of a devastating tsunami in Japan.

The purpose of these scenes, other than to show the world that Russians are as eager to help other countries as anyone else, is to set up the narration of the film. This is a Russian-made movie, so a little positive publicity (propaganda is probably too strong a word) goes a long way.

Back at the front in Stalingrad: food and water are precious commodities, and communications with their bases are minimal. The wrinkle here is that two women, caught in the middle of the fighting, are stranded in each of the two sites.

A German captain, under siege from a superior officer for shirking his responsibility, is linked to a pretty Russian in a one-sided sexual relationship that evolves into love. A Russian soldier, meanwhile, is smitten with a 19-year-old girl who is found among the ruins of the building they occupy, just as his entire troop takes her under their wing.

Despite the static setting and length of the film --- it exceeds two hours and could have been pared back --- the commendable acting and splendid photography keep it fluid and compelling. The only pitfall is the lack of character development. We don't know who these people are, on either side, and while we sympathize with their plight, it's only a superficial emotional investment by the viewer.

"Stalingrad" is very impressive in IMAX and 3-D, placing us smack in the middle of a war-like environment --- tanks, mortars, whizzing bullets, hand-to-hand combat, strafing from fighter planes. Not on the grand scale of the D-Day scene from "Saving Private Ryan", but frighteningly realistic nevertheless. From that standpoint, the film succeeds.