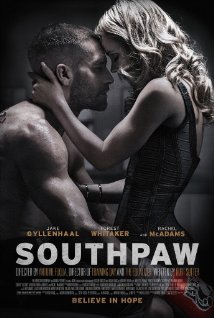 Poor boy from the "system" marries childhood sweetheart, also from the system, makes good, then loses everything, and redeems himself in the end. If this sounds like a modern fairytale, that's exactly what "Southpaw" is --- a make believe story set in the violent world of boxing.

Having never been a fan of the sport --- and I use that term loosely --- I find it incredibly difficult to sit through the actual boxing scenes because of the physical brutality. Though director Antoine Fuqua does a stellar job of making sure each fight scene is well choreographed, the back story is saturated with cliches, and a premise containing virtually no originality.

Billy "the Great " Hope (Jake Gyllenhaal) is the reigning Light Heavyweight Boxing Champion of the World. He's married to his best friend and protector, Maureen (Rachel McAdams), and they have a precocious and adorable daughter, Leila (Oona Laurence). Together they reside in a fabulous hillside estate outside of Manhattan, drive multiple expensive cars, and are living the dream.

Following Billy's latest fight, and also one of his longest and bloodiest, the gorgeous couple are called upon to attend a charity event where Billy is the keynote speaker. Billy's nemesis is also in attendance, and sparks fly as Billy and Maureen try to exit.

The result is tragic in so many ways for Billy, who eventually loses everything. He is forced to start over at a small impoverished gym run by Tick Willis (Forest Whitaker), a retired fighter and trainer. Willis is reluctant to help Billy, but his dire situation and persistence persuades Willis to take him on.

The most admirable aspect of "Southpaw" is Gyllenhaal's dedication to learning the sport of boxing because Fuqua wanted no body doubles. Both Fuqua and Gyllenhaal trained with Terry Claybon, a former professional fighter who has trained some of the biggest stars in the industry. Claybon also choreographed the fight sequences which are quite marvelous and authentic.

Gyllenhaal trained daily for six months and got down to 175 pounds for the "lightweight" part. Running, jumping rope, technique, footwork and so much more filled his days. Also the mental aspect of boxing had to be addressed. Understanding the mindset of a boxer was another large part of his preparation.

All of this leads to a stunning performance by Gyllenhaal, but it's not enough to save "Southpaw". Screenwriter Kurt Sutter has done a disservice to Gyllenhaal and the rest of the cast by not creating a better script. Everything is so neat and so predictable.

Beginning with Billy's championship bout at the beginning of "Southpaw", to the final fight to regain his status, we can foresee the results. Even out of the ring the story is too pat. The courtroom scenes render no surprises --- the audience can immediately surmise what will transpire.

Redemption is a tough road for anyone. But Billy's journey just isn't that difficult or compelling. If it were not for Gyllenhaal's and Whitaker's superb performances, "Southpaw" would have been a complete waste of time.

It's early, and I hesitate to be overly effusive about a movie coming out in July. Antoine Fuqua's "Southpaw" is unequivocally the best boxing film in almost 40 years ("Rocky", 1976), and that includes critically acclaimed hits like "Raging Bull", "Million Dollar Baby" and "The Fighter". It's a true crowd-pleaser in the "Rocky" vein.

What Fuqua's "Training Day" did for Denzel Washington (Best Actor Oscar in 2002) and Ethan Hawke (nomination for Supporting Actor), "Southpaw" may do for its stars. Gyllenhaal may snag the honor that eluded him last year for "Nightcrawler", and Whitaker, who plays "Tick" Willis, the veteran trainer of amateur boxers who runs his own gym for disadvantaged young men, has his best role in eons. He was named Best Actor for "The Last King of Scotland" (2006).

Rachel McAdams, in a cogent performance, is Maureen, the wife of light heavyweight champion Billy Hope (Gyllenhaal), and mother of their 10-year-old daughter, Leila (Oona Laurence). Hope is undefeated, his latest opponent another knockout victim. But for all his success in the ring, Billy plays defense with his face, preferring to slug it out in his matches rather than use finesse.

Billy, Maureen and Leila live in the lap of luxury --- huge mansion, fancy cars --- you name it, they have it. But things change drastically after Billy gives a brief speech at a charity fundraiser. When Billy's life starts to unravel, the headline in the local newspaper calls him "The Great White Dope". And

that's all the plot I care to mention. Anything more would reveal too much of a totally absorbing story.

The fight sequences in "Southpaw" are the best I've ever seen. Even Jeanne, who loathes boxing and cringes whenever a punch is landed, will laud the choreography. For further realism, Fuqua hired veteran ring announcer Jim Lampley, along with sidekick Roy Jones, Jr., to describe the action.

As for the little bespectacled Leila, she will break your heart. It's an amazing performance from Ms. Laurence. Other cast standouts are Curtis "50 Cent" Jackson as a greedy boxing promoter, Miguel Gomez as Miguel Escobar, Billy's most despised adversary, and especially Naomie Harris as Angela, a child services administer. She is terrific.

Don't be deceived by all the boxing hoopla advertised in "Southpaw". The out-of-the-ring portions of the superior script by Kurt Sutter (TV's "The Shield", "Sons of Anarchy")  will have you as engrossed as with any other aspect of the movie. The requisite violence is more than offset by the richly conceived relationships of its cast.

It's also a film that has multiple Academy Award nominations written all over it. I look for at least five Oscar noms --- Best Actor (Gyllenhaal), Best Supporting Actor (Whitaker), Best Director (Fuqua), Best Editing, and Best Picture. If there was another category for Best Body Transition, Gyllenhaal would win it hands down. Channing Tatum's six-pack abs look almost ordinary next to Jake's chiseled frame.