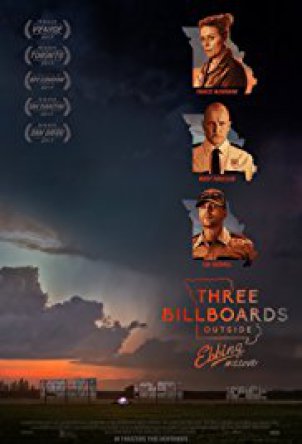 "Three Billboards Outside Ebbing, Missouri" is a dark dramedy about a woman, Mildred Hayes (Frances McDormand), who, out of pure frustration, rents three billboards outside the small town of Ebbing, Missouri on Drinkwater Road --- a road less traveled --- painted with a damning message to the Chief of Police, William Willoughby (Woody Harrelson). Residents of Ebbing are outraged, mostly because Chief Willoughby is widely respected and he's dying of cancer.

But Mildred doesn't care one bit about what people think or Willoughby's sterling character and impending demise. She is angry because months have passed and nothing has been done to find the person who raped and murdered her daughter. Her intent is to light a fire under the chief and his officers to catch the killer of her child.

One of the members of this small community most perturbed by Mildred's billboards is Officer Dixon (Sam Rockwell), a hot-head mama's boy with a penchant for violence. No one is safe when Dixon gets riled --- including the poor kid, Red Welby (Caleb Landry Jones), who sold Mildred the billboards.

Even Mildred's teenage son, Robbie (Lucas Hedges), isn't happy with his mother's decision. He must endure the wrath of his fellow classmates, who also support Willoughby. Mildred's ex-husband, Charlie (John Hawkes), is vehemently opposed to her boldness, insisting she have the billboards dismantled.

Mildred's only support comes from James (Peter Dinklage), the town midget and Denise (Amanda Warren) who works for Mildred at her trinket shop. Poor James is besotted with Mildred, and comes to her defense more than once, but Mildred treats him with disdain. Denise ends up in jail as a thanks for her friendship with Mildred.

Written and directed by Martin McDonagh ("In Bruges"), "Three Billboards Outside Ebbing, Missouri" addresses the all-consuming hopelessness of a parent whose child has been savagely murdered, and what, if anything, can be done about it. Rage is a common thread in McDonagh's screenplay --- from all sides.

Everyone involved in this matter is angry and disillusioned --- Mildred with the police and the police with their inability to solve this horrific crime. Sometimes there simply are no answers, which is a possibility that drives Mildred to distraction. What can be done when there just isn't any evidence?

McDormand is a powerhouse. She explains that she channeled John Wayne, because she could not think of a female to utilize as a physical icon for Mildred. When she lashes out at the Catholic priest, who comes to her home to plead the case for removing the billboards, it is one memorable tour-de-force moment in a movie full of others. She should be on the short list for a Best Actress nomination.

Every actor is this film is crazy, stupid good. Rockwell is another contender for an Oscar. He's so perfect as the maniacal Dixon it's scary --- the quintessential mama's darling. And I have been a Dinklage devotee since his break-out role in "The Station Agent", one of my all-time favorite movies. His scolding of Mildred is classic, even though we may have heard those sentiments before.

The game changer in "Three Billboards Outside Ebbing, Missouri" is Harrelson. His performance sets a new bar for supporting actors. He was terrific as the insane commander in "War for the Planet of the Apes" this past summer, but here, as Chief Willoughby, he exudes a fragility mixed with toughness we've not seen before from him. I was mesmerized each time he was on screen --- and off. And obviously, a great deal of the credit also goes to McDonagh for his erudite script.

My only complaint with "Three Billboards Outside Ebbing, Missouri" is its length of 115 minutes. It dragged a tad in parts, which could have been alleviated with a tightening of 10-15 minutes. There were several times near the conclusion of "Three Billboards Outside Ebbing, Missouri" when I believed the film to be over. Instead, a few scenes seemed to be added unnecessarily. But this is a small price to pay for an irreverently clever film with an extraordinary cast.

The premise of "Three Billboards Outside Ebbing, Missouri" is strictly fiction, written by Martin McDonagh, who also directs. Yet I imagine the story speaks to untold numbers of families who have suffered --- and continue to suffer --- from unsolved tragedies involving loved ones.

"Three Billboards Outside Ebbing, Missouri" is, indeed, well-written and acted. Mildred Hayes (Frances McDormand), seven months after her daughter Angela's rape and murder, and seeing no progress from the authorities in making an arrest, takes matters into her own hands. She purchases advertising space in her hometown on three billboards which stand within several feet of each other. Thus their three-pronged message is connected when motorists drive by.

She targets William Willoughby (Woody Harrelson) because he is the police chief, and the buck stops with him. Willoughby, meanwhile, employs a rude, crude deputy named Jason Dixon (Sam Rockwell). He is your local crud ball, and is no fan of Mildred's version of free speech.

"Three Billboards Outside Ebbing, Missouri" is unique and unusual, and though at its core there is an unsolved murder, the film is rife with humor. Mildred can be hysterically funny because she has nothing to lose while trying to get to the bottom of her daughter's death. By the way, the film only shows Angela (Kathryn Newton) once, so McDonagh doesn't beat us up over her image. But that one time was the last conversation between Mildred and Angela, and not on good terms.

Most of this movie does not revolve around efforts to find the perpetrator(s), so what other direction can it possibly take? That's what makes "Three Billboards Outside Ebbing, Missouri" so engrossing. Willoughby is earnest in wanting to solve the murder, but he has life-and-death issues of his own. In fact, he plays a direct role in reversing Dixon's negative attitude, but he's not present when that happens.

McDonagh has crafted a clever script, filled with irony --- and memorable characters abound. In addition to the reliable trio of McDormand, Harrelson and Rockwell, we are treated to supporting appearances from Peter Dinklage and John Hawkes.

Dinklage is James, the town midget (the script's term, not mine), and he has a crush on Mildred. They even go to dinner on a date, Dinklage looking dapper in his suit and thick, droopy mustache. Hawkes plays Mildred's ex-husband, who is now dating a 22-year-old babe named Gabriella (Malaya Rivera Drew, who makes a sweet bimbo, nevertheless).

The plot has a few twists and turns, none more so than when Mildred really decides to take matters into her own hands. I had a small problem at the very beginning when Mildred walks into the office of the billboard management, and promptly plops down $5000 in cash for one month's "rent". It seemed like an awful lot of money for a small-town operation, and shouldn't she have negotiated for a better rate? Fortunately, the movie only gets better from that point on, and leaves us with an ambiguous, but satisfying, ending.