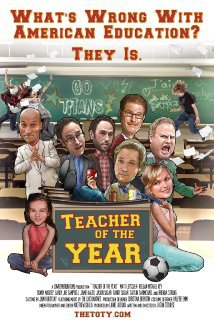 A documentary crew follows Mitch Carter (Matt Letscher) through his daily life after winning California Teacher of the Year. Written and directed by Jason Strouse, who dedicated his work to the teachers who

influenced him most, "Teacher of the Year" is a smart and spot-on evaluation of the teaching profession today.

Mitch is an English teacher at Truman High School in L.A. His family consists of lovely wife Kate (Sunny Mabrey) and their devoted daughter Sierra (Caitlin Carmichael). A new job offer, with a much greater salary, comes Mitch's way, threatening upheaval for the Carter clan.

Life is good for Mitch --- he loves his job, and the students seem to appreciate him. Even his wacky fellow faculty members respect him, all except the robotics teacher, Steven Queeg (Jamie Kaler), who resents his title of Teacher of the Year.

He is also the faculty labor union rep, so when fellow teacher, and his friend, Brian Campbell (Chris Connor) is accused of fondling a female student, Mitch jumps to his defense, in every effort to save Brian's job. But the spineless principal of Truman High, Ronald Douche (Keegan-Michael Key), comes very close to ruining the negotiations, thus helping Mitch to make his decision regarding the new opportunity.

Strouse's game plan utilizing the mockumentary style is focused, and keeps the story on track. By interviewing many of the teachers and school staff we get a very good idea of the day-to-day proceedings in a large high school. Teaching is not always fun, as evidenced by the young newbie who is totally flummoxed and can't control his classroom. It's sad and hilarious at the same time.

Of course, Principal Douche's last name aptly describes his character --- giving the students multiple chances to make fun, while he insists it's pronounced "Du-shay", like in Belgium. And Key (of "Key & Peele) is a terrific choice for such a smarmy, self-righteous administrator.

Letscher is really quite good as Mitch. He's had an extensive career in both film and TV, but not a recognizable household name. I particularly enjoyed his Perry Mason persona when interviewing Brian's accuser --- a difficult scene because if overplayed, would not have had the same impact.

Strouse's strong suit is his casting. His writing and directing are solid, but his ability to select the right actor makes all the difference in "Teacher of the Year". His career as a director is still new, but watch for more/better things from him.

Thanks to a highly-skilled group of comedic actors with years of experience --- largely honed on television --- and the absurdist humor of writer/director Jason Strouse, "Teacher of the Year" is a film I can heartily recommend. Outside of Keegan-Michael Key ("Key & Peele"), the average moviegoer would need a "millionaire lifeline" to identify the other cast members by name. But that's part of the beauty of this movie within a movie --- I'll explain later.

Winner of a handful of first place honors at national film fests, including last year's Chicago Comedy Film Festival, it is worthy of much wider distribution. It is superior to so many mediocre movies billed as comedies that are financed and promoted by the major studios.

Mitch Carter is the kind of high school English teacher to whom kids can relate. He's funny, down-to-earth, and as portrayed by Matt Letscher, eminently likeable. Mitch has a beautiful wife, Kate (Sunny Mabrey), a sweet little girl, Sierra (Caitlin Carmichael), who loves to color with her daddy, and another baby on the way. His modest salary only goes so far in southern California, so when he's offered a job in Washington, D.C. that doubles his income, he has a hard choice to make.

Letscher is only one cog in the effectiveness of "Teacher of the Year", but his character is the biggest cog. Mitch is the reason the school's robotics teacher (didn't know there was such a thing) Steven Queeg (Jamie Kaler), thinks the top prize belongs to him.

Also, Mitch is the main thorn in the side of Principal Ronald Douche (pronounced Du-Shay, a running joke that somehow doesn't get tiresome). Key is perfectly cast as the arrogant, lame-brained headmaster who refuses to get his head out of the sand when problems arise. And there's no whining in his office because he holds up a sign that says "No Whining" if you do.

And when a female student (Olivia Crocicchia) charges sexual harassment  against one of Mitch's fellow teachers, Brian Campbell (Chris Conner), Mitch is pressed into action as a character witness in the principal's office.

But wait, there's more. The Hammer brothers, Lowell and Clive (Jason and Randy Sklar) are fast-talking college counselors who see one student's application rejection as another student's opportunity. They are hilarious.

Equally funny is Larry Joe Campbell as Marv Collins, the school's beleaguered Assistant Principal/Dean of Students, and enforcer of aberrant behavior, who hands out demerits for minor offenses, like looking at him the wrong way. Eric Sanders (Karl T. Wright) is an African-American teacher who has no qualms about showing his disdain for Douche.

In my high school, we had educators doing double duty. For example, my history teacher was also my baseball coach. Thanks to Strouse's quirky sense of humor, one guy has the title of Human Sexuality/Driver's Ed instructor. And I loved the parent-teacher conferences so germane to the high school experience.

The young actors portraying the students are well cast, and don't make the mistake of overacting. We believe they're in school. Strouse has infused his script with many amusing moments for these kids. And the many women in the cast all excel in, albeit, smaller roles.

Oh, the movie-within-a-movie comment earlier? Everything that's going on at Truman High is being captured on film, because a filmmaking crew is creating a documentary.

Thankfully, "Teacher of the Year" never crosses the line into ridiculous, and it doesn't rely on bathroom humor to be entertaining. Are you listening, Mr. Sandler?

Strouse gives thanks to such diverse celebrities as Woody Allen, George Carlin, Kobe Bryant and Bruce Springsteen, who evidently were influential in their own ways to the making of this film. He also dedicates it to three important people in his life --- check out the final credits. "Teacher of the Year" is well worth your time.