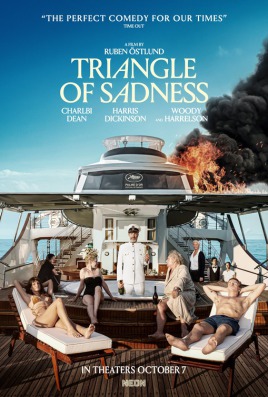 Winner of the Palme d’Or at Cannes this past May, TRIANGLE OF SADNESS is definitely not a movie for the masses. It is, however, a biting and hilarious indictment of the uber-wealthy and the importance we place on beauty. Some will find it completely horrifying, while others will certainly appreciate the ironies on display.

A male model, Carl (Harris Dickinson) and his influencer/model girlfriend, Yaya (Charlbi Dean), find themselves on a mega-yacht courtesy of one of her jobs. Even before boarding, the staff is lectured by Paula (Vicki Berlin), the chief steward, about catering to their guests’ every whim --- which hopefully will result in huge tips for everyone.

With the Captain’s Dinner --- and a major storm --- on tap, Paula is unable to coax the ship’s captain (Woody Harrelson) out of his cabin. A raging alcoholic --- and Marxist --- he finally graces the passengers with his presence at dinner. However, the evening turns into a vile circus of vomiting --- and eventually diarrhea --- with toilets all over the ship exploding. It’s nasty, and lengthy, and ultimately unbearable, but somehow you can’t turn away --- though I tried. I really tried.

While the ship rocks like a toy boat in a bathtub, pirates attack, culminating in a harrowing explosion. Hours later, a few of the passengers and crew end up on a deserted desert island with no idea how to fend for themselves --- and no food.

Abigail (Dolly de Leon), who managed the toilets on the yacht, shows up in a lifeboat with minimal provisions. She is the only one who knows how to catch fish and build a fire on which to cook them, so now she’s in charge.

Abigail sets her sights on Carl, allowing him to spend the nights with her on the beached lifeboat. Yaya isn’t exactly thrilled with this new arrangement, but both she and Carl realize they need Abigail to survive. It’s only when Carl starts to have feelings for Abigail that problems arise, and someone’s life is threatened.

The triangle of sadness is a term used to describe the deep wrinkle between one’s eyebrows. According to Swedish director, Ruben Östlund, it’s called a ‘trouble wrinkle’ in his homeland --- nothing a little Botox can’t fix. At the beginning of the film, Carl has his pointed out during a modeling audition. By the end of TRIANGLE OF SADNESS, it appears to have a completely different meaning.

WILD is my word to describe Östlund’s latest effort. Two of his other features, FORCE MAJEURE (2014) and THE SQUARE (2017), which also won the Palme d’Or, have been well received critically. David and I were not crazy about FORCE MAJEURE, but I did love THE SQUARE. TRIANGLE OF SADNESS is equally controversial, with Östlund expanding on his running theme of men behaving badly.

Many will be put off by the middle third of the movie which captures the overindulgences of these clueless passengers while they slurp oysters and soup, only to vomit it all up. Then we are disgusted again when the lowly crew members are made to clean the huge

mess --- scrubbing the floors on their hands and knees.

Östlund’s satirical farce doesn’t provide a satisfactory conclusion. But it’s a hoot getting there.

Writer/director Ruben Östlund won his second Palme d’Or at Cannes this year for TRIANGLE OF SADNESS following the same award in 2017 for THE SQUARE. That surely says quite a lot about the 48-year-old Swedish talent.

TRIANGLE OF SADNESS is a beauty term referring to the place between the eyes that generally develops wrinkles. As inane as that sounds the film has its own brand of silliness as it follows wealthy passengers on a luxury yacht. But what laugh-out-loud scenarios!

Woody Harrelson, of all people, plays The Captain and looks resplendent in his white uniform with the gold buttons. However, when the Captain’s Dinner goes awry, Woody’s character --- staggering drunk --- goes on a Communist Manifesto tirade over the ship’s loudspeaker, and it’s hysterically funny.

But genuine laughs occur when motion sickness affects most of the guests --- resulting in what normally wouldn’t be so amusing --- i.e., the lot of them throwing up en masse. Who would have thought that a luxury cruise ship doesn’t have its own vomitorium?? But I digress.

The real adventure begins when there is a major event on board and a small group of survivors end up on a deserted island. The dialogue at this point is fascinating as Östlund creates a small world where class distinctions no longer matter.

The ensemble cast is completely compelling even if some of the characters are unsavory. My two favorites are Charlbi Dean as Yaya, a beautiful model; and Dolly de Leon as Abigail, the ship’s head of toilet cleaning who also survives with tremendously ironic results. Unfortunately, Ms. Dean passed away at age 32 on August 29th 2022 due to still unknown causes. Often seen on the pages of Vogue and GQ, TRIANGLE OF SADNESS was her first starring role in a feature length film.

Östlund also leaves us with quite an ambiguous ending which will leave viewers musing. And do not fear the movie’s unusually long running time of nearly three hours --- it goes quickly.

TRIANGLE OF SADNESS was filmed in the Greek Islands during the pandemic. Not a bad way for this cast of characters to bond.