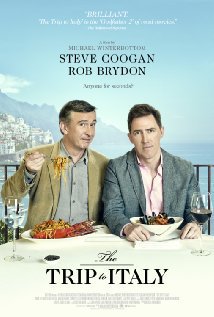 Director Michael Winterbottom and comedians Steve Coogan and Rob Brydon have re-teamed to bring us another, often hilarious, buddy/food/road trip through some of the most picturesque vistas Italy has to offer. After their success with the mostly improvised 2010 movie, "The Trip", which followed Steve and Rob on a culinary car tour of northern England, someone must have thought a "sequel" would be a smashing idea.

And, of course, when two very funny and talented  comedians such as Coogan and Brydon are involved, it is a very good idea. In sort of an off-the-cuff way, these two attempt to retrace the steps through Italy of Lord Byron and Percy Bysshe Shelley, two of the Romantic poets who self-exiled themselves to this land of idyllic views and exceptional food.

Traveling mostly by car, a darling Mini Cooper convertible, the friends start out in Liguria and end up in Capri, traveling through Tuscany and Rome along the way. The hotel accommodations are exquisite, and the six restaurants featured are picture-perfect, some with breathtaking views, and all with sumptuous gastronomic delights.

Coogan and Brydon maintain an always easy-going patter. They are friends, though perhaps not "best" friends. Coogan has a 16-year-old son Joe (Timothy Leach), with whom he is trying to reconnect. At the end of the trip, Joe actually comes and joins them. It's a nice addition, and their relationship brings another dimension to this rather light and cheery study of male bonding.

Rob has a wife and three-year-old daughter at home. But we sense, early on, that things may not be quite so perfect behind Rob's sunny facade. On a serenely beautiful day aboard a sailboat named "Patience", Rob and Lucy (Rosie Fellner), one of the crew, become emotionally tangled, and end up spending the night together. Rob believes it is only a one-night stand until he receives a call from Lucy two days later suggesting another meeting.

This is where I think "The Trip to Italy" veers off course. When Rob and Lucy's first encounter ends, Rob seems remorseful, and regrets his behavior. But after he is rebuffed by his wife in a phone call, he begins contemplating another visit with Lucy. You can always tell when men are involved in a script --- it's always the wife's fault.

It doesn't matter that Rob is having the time of his life wandering around Italy, staying in fabulous hotels and eating divine cuisine, while she is at home in rainy London, working and caring for a three-year-old. The minute the wife doesn't want to hear his annoying chatter in a Dustin Hoffman voice, he's already considering another sexual liason. It is maddening --- truly maddening --- and it almost ruined the film for me.

Alas, it did not. Listening and watching Coogan, alone, is worth the effort to see "The Trip to Italy". He is profoundly funny, and both he and Brydon are immensely talented voice impersonators. Even though they had agreed not to recreate a Michael Caine scenario, it happens anyway --- they simply cannot help themselves.

"The Trip to Italy" is a wonderful travelogue. It is so lushly filmed by James Clarke that I could watch it again and again. Despite Brydon's marital hiccup, Winterbottom's follow-up is a real pleasure.

When was the last time you had a conversation about surviving a plane crash by eating someone's legs as long as they had no feeling below the waist, and were about to die, anyway? I thought so. English comedians Steve Coogan and Rob Brydon now find themselves touring Italy on a culinary assignment in this sequel to "The Trip" (2010) that should come with a warning: don't see this film on an empty stomach.

What a life --- these guys actually got paid to do this movie. They travel to places like Tuscany, Rome and Capri --- via their Mini Cooper or an exotic sailboat with a mostly female crew --- consuming fabulous meals and staying in magnificent accommodations, in one of which even Greta Garbo sought refuge.

As they did in their first film, pals Coogan and Brydon riff on each other, and compete to see who can do the best impressions. Actually, that's no contest --- it's Brydon, hands down. He does an amazing Hugh Grant, as well as Al Pacino and Michael Caine. He is a brilliant talent, known throughout the UK for his many TV and radio appearances, including his own show.

Coogan is well known in the U.S., especially after his performance last year in "Philomena" (one of my favorite movies of 2013), plus his double Academy Award nominations for co-producing and writing the film. He has that screen presence that compels the viewer to lock in on his every word, lest you miss a verbal gem.

In fact, "The Trip To Italy" virtually requires a second helping to catch all the vignettes, barbs and witticisms this duo articulates. And viewing the glorious Italian landscape again would certainly be a welcome experience. But no doubt the steady patter of their varied discussions is the big draw. Like their first movie together, this film is quite talky. But there are other diversions, like their excursion to Pompeii,  and their varied stops along the way.

"The Trip to Italy" is also edgier than the first film, if only because of the married Brydon's sexual dalliance with one of the aforementioned female sailors. His guilt-ridden reaction to the event is one of the more serious moments in an otherwise raucous adventure.

One of my favorite elements of their conversations is the frequent references to American movie stars, past and present. There is something appealing about Brits dropping names like Gregory Peck, Humphrey Bogart, Robert de Niro and Tom Cruise. There are even brief mentions of two recently deceased stars, Philip Seymour Hoffman and Robin Williams. And speaking of Cruise, there's a typically hilarious exchange between Steve and Rob about Coogan's short-lived appearance in "Tropic Thunder".

Early on during their road trip, Coogan makes it clear to Brydon that he's not gay, which, of course, leads to a funny sequence about Brydon being in jail, and his cellmate beckoning him back to bed. If it's engaging male banter you crave, it doesn't get any better than this.

It's hard to tell where "The Trip To Italy" was scripted versus the two friends improvising. Director Michael Winterbottom is shrewd enough to let these guys do their own thing. Either way, it's a very funny follow-up, and a third film is rumored to be in the works.