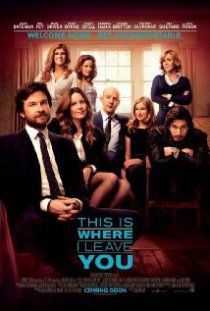 When their father dies after what appears to be a long illness, the Altman family --- widow Hillary (Jane Fonda), sons Judd (Jason Bateman), Paul (Corey Stoll), and Phillip (Adam Driver), and daughter Wendy (Tina Fey) --- sit shiva in the home where they all grew up. Sitting shiva is a Jewish tradition akin to a funeral mourning line, except that it lasts for seven days, "shiva" being the Hebrew word for seven.

This is a convenient excuse for the siblings and their overbearing mother to get reacquainted. And in the process, spouses, girlfriends, cousins and friends also are in the house at one time or another. "This Is Where I Leave You" is billed as a dramedy, and while there are valiant attempts at poignancy, they mostly fall flat.

The humor is frequently silly and undermines the story's serious moments. The most egregious situation has a large group in the living room eavesdropping via a baby monitor as Paul and his wife Alice (Kathryn Hahn) are overheard having sex upstairs in an attempt to get pregnant. Hardly original material.

Other times Cole, a toddler, is seen dragging around his own port-a-potty and dropping his pants to make doo-doo, even flinging his accomplishment, on one occasion, at someone in the room. The kid has a bright future in an Adam Sandler movie.

Then there's Hillary. Not looking anything like her 76 years --- credit a good workout regimen, plastic surgery or maybe just good genes --- Fonda's character also is sporting new breasts, courtesy of rubber prosthetics. They get a lot of play in this script, literally, in one scene, from Fey. There are at least four references to Hillary's self improvements, and that's three too many. Thank you to screenwriter/novelist Jonathan Tropper.

We could have expected better from director Shawn Levy, who helmed the very funny "Date Night" (starring Fey and Steve Carell). On the other hand, Levy directed the mediocre Ben Stiller "Night at the Museum" films, and the rather unfunny "The Internship" with Vince Vaughn and Owen Wilson.

"This Is Where I Leave You" opens with Judd proudly carrying his wife's birthday cake into the bedroom --- doesn't everyone eat birthday cake in their bedroom? --- only to find wife Quinn (Abigail Spencer of "Suits" fame) having wild sex with Judd's radio station boss Wade (Dax Shepard). So in a flash, Judd loses a spouse and a job. His depression is short-lived, though, because he gets the call from Wendy that their dad has passed away.

No longer saddled with a cheating wife, Judd renews a friendship with childhood neighbor Penny Moore (Rose Byrne), who has had a lifelong crush on Judd, maybe explaining why she never married. This sounds like a page from "It's A Wonderful Life" where Donna Reed, nearing spinsterhood, finally lands James Stewart. The lovely Byrne bears a physical resemblance to Reed, and actually, Penny and Judd's evolving relationship is one of this film's few highlights. Unfortunately it's utterly predictable, like everything else --- except for a secret that Hillary reveals at the end.

"This Is Where I Leave You" also features top performances from Driver as the youngest, albeit most irresponsible, sibling --- he steals every scene he's in --- and Timothy Olyphant as Horry, Wendy's former love. Horry and Wendy were in a car accident, leaving Horry somewhat mentally diminished, and Wendy feels forever guilty about it. Olyphant brings a subtle sweetness to his role.

For a truly fine film about sibling inter-relationships, see "The Skeleton Twins". It's far superior to "This Is Where I Leave You".