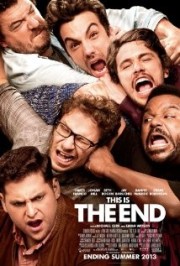 I am slightly embarrassed to admit this, but I found "This Is The End" to be quite humorous. Is it stupid in parts? Yes. Is it childish and inane in parts? Yes. Does it contain a great deal of bathroom humor? Unfortunately, yes. But, did I laugh --- a lot? A resounding yes!

With a story and screenplay by Seth Rogen and Evan Goldberg, based on a short film they made several years ago with Jason Stone, "Jay and Seth Versus The Apocalypse", how could "This Is The End" not be all of the things mentioned above? These two childhood friends have been writing, producing and now directing together for years. It is no coincidence that this movie is wildly raunchy AND funny.

All of the "characters" are playing themselves. Jay Baruchel is no longer living in LA because he can't stand the people and the phoniness, but he's in town visiting his good buddy Seth for a fun-filled weekend of hangin' out. Much to his chagrin, Seth insists upon going to James Franco's new house for a party. Jay dislikes Seth's other friends immensely, especially Jonah Hill, whom he thinks doesn't like him and is suspicious of  his overly kind demeanor.

Seth promises Jay they'll leave whenever Jay is ready, so off they go to see Franco's architecturally intriguing abode, which he designed himself. The party is packed with Hollywood A-listers like Rihanna, Emma Watson, Mindy Kaling, and, of course, Seth and Franco's other pals, Hill and Craig Robinson. Everyone except Jay is having a great time until what seems like an earthquake has rocked LA. Except it's not just a quake ---

Usually I'm not a big fan of this type of humor. I loathe grotesque bathroom references, but "This Is The End" is SO much more. While facing the end of the world, these guys are fighting over a Milky Way candy bar. After days of languishing in Franco's home, food and water have become scarce, and these nitwits must rely on their "wits" to survive. It's not easy for them, trust me.

This is a script chock full of clever one-liners, obscure movie references and everyday

things that make us guffaw. And even though this is a comedy, I jumped more in this film than in many recent horror movies. The monsters are frightening and well-animated --- great stuff!

The set decoration by Helen Britten and production design by Chris L. Spellman have us believing the hills beneath the Hollywood sign are really burning, and the mammoth sinkhole in Franco's front yard is for real. It's a genuine effort on everyone's part.

But watching these guys interact, especially when Danny McBride enters the fray, is a hoot. Staving off hunger, thirst and a re-enactment of "The Exorcist" is all part of the fun.

"This Is The End" is irreverent, fractured, uneven and even silly. But fortunately for moviegoers, it's also hysterical!

I have a feeling that "This Is The End" is only the beginning. It's a weird and often absurd creation from the team that gave us "Pineapple Express" and "Superbad", namely Seth Rogen and Evan Goldberg. It's also inventive and extremely funny, and probably needs to be seen more than once.

In fact, the cast is a compilation of the zanies who were in both pictures, i.e., Rogen, James Franco, Craig Robinson and Danny McBride ("Pineapple Express") and Rogen, Michael Cera and Jonah Hill ("Superbad"). Just for fun, Emma Watson and Rihanna are also in the mix, with cameos from Channing Tatum and Paul Rudd. Rogen et al play themselves, and if it looks like they're having too good a time making this film, that's probably accurate.

"This Is The End"' opens with Rogen greeting an old friend, Jay Baruchel, at the airport in LA, a place Jay detests, but he's willing to put those feelings aside to visit his pal. Seth takes Jay to a party at James Franco's posh residence, although Jay tells Seth he's also not very fond of Franco. The usual suspects are partying, and the whole scene promises that we're in for stupid drug jokes and dumb bathroom humor. But when Rogen and Baruchel venture out to a convenience store, all hell breaks loose.

A TV report advises everyone to stay indoors, so that's what Rogen, Robinson, Franco, Hill and Baruchel do, and they are soon joined by McBride. Watson is a genuine hoot as an ax-wielding refugee from the outside, which features spectacular set designs of a fiery, unsettling vision of Los Angeles. But this is a comedy, right? So the guys figure out their rations, including a single Milky Way bar, which they argue about in the midst of this potentially life-changing Armageddon.

Sight gags abound, like Rogen placing duct tape over a huge crack in the wall, and Hill doing his best Linda Blair impression after being possessed by a demonic creature unleashed from the bowels of hell. And giant sinkholes with bottomless pits look like they're leading directly to hell itself.

Some of the writing is a bit too much, like McBride and Franco in a heated debate about McBride's frequent ejaculations all over Franco's house --- just a tad over the top.

But most of the screenplay, based on a short film, is pretty damn funny. Consider "This Is The End" as a coup and a major comeback for Goldberg, who unfortunately is credited with writing the unwatchable "The Watch" a few years ago.

I'm predicting a sequel of this movie to be entitled "This Is The End, Really".