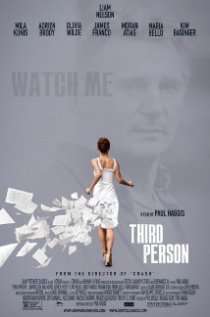 Writer/director Paul Haggis has a penchant for writing screenplays which intertwine peoples' lives. He did it successfully in 2004 with "Crash", which won Oscars for Best Picture, Original Screenplay and Editing. With "Third Person" Haggis attempts the same feat, but this time, with much less originality.

Liam Neeson is present (it seems he is everywhere these days) as Michael, a Pulitzer-winning author holed up in a luxurious hotel suite in Paris trying to cure his writer's block. He has recently left his bereft wife, Elaine (Kim Basinger), for a wilding, writer-wannabe named Anna (Olivia Wilde), who apparently has father issues.

James Franco and Mila Kunis play divorced parents Rick and Julia embroiled in a nasty custody battle over their six-year-old son. Maria Bello is Theresa, Julia's attorney, who is caught up in her own drama. Rick, a well-known artist in New York City, is currently living with Sam (Loan Chabanol), who sees what Rick's destructive behavior is doing to Julia.

In the meantime, Scott (Adrien Brody) is anxious to leave Rome after stealing current designs from Italian houses of fashion. Unwittingly, he meets Monika (Moran Atias) in a bar, where she leaves behind her life savings meant for the return of her little girl taken by a local smuggler. In his efforts to help Monika, Scott begins to feel he has been had.

Haggis has a lot going on in "Third Person", but it's not nearly as cohesive as it needs to be, nor are we sure where he's leading the audience. Many at our screening figured out his game plan way before I, which is fine, but I found "Third Person" to be more confounding than entertaining.

As writer and director, Haggis has again managed to surround himself with accomplished actors, but his script is weak in its believability factor. One scene has Anna running around, from one floor to another, the upscale hotel in Paris naked, after nonchalantly dropping her robe at Michael's door. A tad absurd, especially with security people watching the escapade unfold on closed circuit TVs.

The good news is this is Neeson's best performance in years. Coming off the incredibly stupid, not funny "A Million Ways to Die in the West" and one too many "Taken" films (though there is a third --- yikes!), he has finally managed to land a role worthy of his acting talents --- because he is talented.

The rest of the cast is fine --- no great shakes in terms of performance awards. "Third Person" makes a valiant attempt at being a continuation of Haggis' love for storytelling and multi-layering, but it falls flat --- not having the panache necessary to keep it compelling. And to make matters worse, he doesn't do justice with his cinematography to New York, Rome or Paris --- c'est dommage.