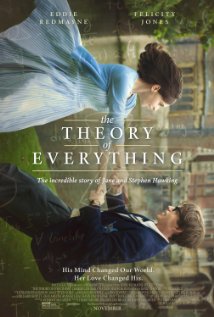 When one hears the name Stephen Hawking, an image immediately comes to mind of a severely debilitated man, confined to a wheelchair, only able to speak via computer. In "The Theory of Everything", based on Jane Hawking's beautiful memoir "Traveling to Infinity: My Life with Stephen", we witness, initially, a very different Stephen Hawking --- a young, vibrant cosmology student at Cambridge University in the UK.

In 1963, Hawking, played by Eddie Redmayne, is a 21-year-old with his whole life before him. He meets and falls in love with Jane Wilde (Felicity Jones), a fellow student majoring in the arts. But a stunning and life-altering diagnosis of a motor neuron disease, MND, akin to ALS or Lou Gehrig's disease, shatters his world.

With a death sentence of two years, and the deterioration of all his bodily functions facing Stephen, and Jane, the two decide to marry despite the dire prognosis. With Jane's incredible strength and determination guiding him, Stephen completes his doctorate, which sets him on his course of theoretical physics.

When two years turn into decades, and one child is followed by two more, Jane and Stephen face multiple challenges, and not all of them are related to Stephen's disease. Jane's need for assistance with caring for Stephen and their children brings widowed choirmaster Jonathan Hellyer Jones (Charlie Cox) into their lives. The three adults form an incredibly close bond, with Jane and Jonathan eventually dealing with the strong feelings they have for one another.

"The Theory of Everything" is a beautifully moving and wonderfully acted film. Directed by Academy Award winner James Marsh ("Man on Wire"), with a screenplay by Anthony McCarten, Jane Hawking's inspirational love story of her life with Stephen is the stuff for which movies are made. Marsh brings it all together --- the sets, the designs, costumes, music --- making one of the best films of the year thus far.

McCarten's adaptation is flawless, a sublime script made perfect by the performances of Marsh's outstanding cast. Redmayne is magnificent at capturing Hawking, complete with every facial nuance necessary to convey his ever-changing disease. He spent many hours studying film of Hawking, rehearsing his various tics --- most importantly the use of his eyebrows to express his wishes. If he isn't considered come Oscar time, it will be a travesty.

Without a stellar portrayal by Jones, this film would have suffered greatly. She is quietly brilliant, giving Jane the fortitude on screen vital to making this love story believable. Jones and Redmayne have a sweet and charming connection, which transcends into a lovely and convincing chemistry.

The remaining cast, including Cox, Emily Watson as Jane's mother, Simon McBurney as Stephen's father and David Thewlis as Hawking's mentor, are all formidable. "The Theory of Everything" is definitely a character-driven film. But when real-life individuals are as accomplished and genuine as Jane and Stephen Hawking, the experience is a defining one.

Stephen Hawking is a world-famous British physicist, regarded as one of the most brilliant minds of his time, or any other era, for that matter. He was passionate about developing a single equation which would explain the beginning of time. A scholar at Cambridge University in England, he fell in love with his future wife Jane, a fellow student. But he was soon stricken with a disease similar to ALS --- "Lou Gehrig's Disease" --- and ultimately confined to a wheelchair. "The Theory of Everything" is their story.

It's a beautiful film with stellar performances by Eddie Redmayne as Hawking, and Felicity Jones as Jane. Redmayne spends most of the movie with a contorted body and slurred speech. To compare Redmayne's turn to that of Daniel Day-Lewis in "My Left Foot" --- for which Day-Lewis won his first Academy Award ---  would be valid. Both actors portray real men who managed to thrive  gracefully and courageously with their serious afflictions.

Redmayne first gained cinema recognition with his role in "My Week With Marilyn" opposite Academy Award nominee Michele Williams. And he next upped his reputation when he was cast as an excellent Marius in the star-studded 2012 movie version of "Les Miserables" --- yes, Eddie can sing, too! His Oscar buzz for this most difficult part is genuine and growing.

Jones, as well, is being talked about for an Oscar nomination. She shows great depth as the conflicted wife who must care not only for her practically helpless husband, but three children, as well. Her unwavering support for Hawking is tested when she meets the handsome leader of the local church choir, Jonathan Jones (Charlie Cox).

Most people's impression of Stephen Hawking is that of a severely handicapped man in a wheelchair. Much of the appeal of "The Theory of Everything" is seeing Redmayne as Hawking before he was diagnosed. To watch him riding a bicycle or dancing with Jane before they were married only exacerbates the sadness we feel knowing what is to follow in his life.

But those early years, as depicted in the movie, go a long way in explaining the man's dignity, self-esteem and sense of humor he has maintained to this day. That is correct. When Hawking was initially diagnosed, he was given two years to live. His actual longevity may shock the medical world, even now, but his remarkable will to survive is no surprise at all.