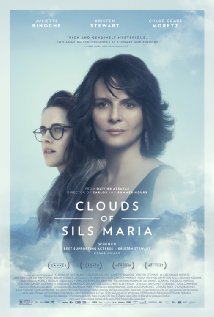 Great films --- or even really good films --- are exemplary in many ways. They possess, first and foremost, solid writing with meaningful dialogue, then professionalism and an all-out effort from the actors, a purposeful soundtrack, all enhanced by outstanding cinematography. In the case of "Clouds of Sils Maria", all of these elements are present, and regarding the photography, I'm not simply referring to the majesty of the Swiss Alps.

The film begins on a train traveling through the Alps on the way to Zurich. Valentine (Kristen Stewart), personal assistant to famous actress Maria Enders (Juliette Binoche), is handling two phones at once, trying to keep up with the demands of Maria's hectic life/career.

They are on their way to Zurich to attend a dinner in honor of Maria's dear friend, Wilhelm Melchior, who gave Maria her first big break at age 18, playing a girl named Sigrid in one of his films. As Valentine juggles the many calls, one is informing her that Wilhelm has just passed away. So what was supposed to be a happy occasion has now turned into a memorial, of sorts.

To further trouble Maria, she is being pressed to star in a play in London reviving Wilhelm's film. This time she is to portray the older business owner, caught in a lesbian affair with her much younger employee, with a Hollywood starlet, Jo-Ann Ellis (Chloë Grace Moretz) playing Sigrid. Maria is vexed that she has taken on this role, unsure if she wishes to face past demons.

Written and directed by Olivier Assayas, who has collaborated before with Binoche, and has known her since both began their careers, "Clouds of Sils Maria" is a revelatory study of aging set around art and acting. Maria is a highly-regarded and sought-after thespian, but she finds the thought of playing against the role of Sigrid disturbing, especially in light of the choice of Ellis, who has a scandalous reputation.

Unfortunately for Maria, Valentine doesn't help much. She, too, pushes Maria into doing the play, only to find herself being driven further and further away from Maria. When she confronts Maria with these new-found feelings, she is scoffed at and rebuffed, compounding her alienation.

Assayas has penned a marvelous script, with skillfully crafted dialogue. This is a relationship-driven film, with Binoche and Stewart supplying the crux of the story. They are well-matched, as odd as that may seem. Binoche has always been a favorite --- she makes everything look effortless, even climbing the mountains above Lake Sils. And she is ravishing on film, whether she is sans makeup, taking refuge in Wilhelm's mountain home, or glammed up for dinner.

Stewart, who recently won acclaim for her role in "Still Alice", is shockingly good as Valentine. It seems almost like another mother-daughter relationship between she and Binoche, but, in the end, it's clearly not. And interestingly enough, Stewart is the first-ever American actress to win a César acting award (French Oscar).

"Clouds of Sils Maria" is such a gorgeous movie --- I could sit through it again and again. Obviously the scenes of Maria and Valentine hiking the mountain trails, having a picnic, running Maria's lines, with the Alps as a backdrop, are breathtaking. And when Valentine insists upon arriving early one morning to catch the "snake" of Majola, a cloud, winding its way through the mountains, a rare phenomenon indeed --- that is exceptional.

What struck me the most, though, was glimpsing the stunning vistas through the windows on the train as it passed through the Alps. It reminded me of a trip I took many years ago, on a train to Zurich, through the same mountains, and how unbelievably magnificent those peaks and valleys are. Ahhh --- but I digress.

Assayas has provided a great deal to think about regarding life, aging and relationships. But, even better, he chose wisely in his efforts to have those thoughts brought to life.

"Clouds of Sils Maria" is a beautifully filmed, marvelously acted and totally dialogue-driven movie in which I found myself hanging on every word. Propelled by superlative performances from its three female stars, Juliette Binoche, Kristen Stewart and Chloë Grace Moretz, it is rich with intense characterizations that most movies don't touch. And there are small twists and surprises along the way. Much of the credit goes to 60-year-old Paris-born writer/director Olivier Assayas.

Maria Enders (Binoche) is a middle-aged French film star en route to Zurich, Switzerland to accept an award for the director who helped her achieve fame on stage and screen in a production called "Maloja Snake". The title refers to an actual natural phenomenon that occurs in the Swiss Alps, a wispy streak of clouds that appears to be slithering through the valley. We are treated to this sight in the film, courtesy of French cinematographer Yorick Le Saux.

Maria is accompanied by her younger, uber-savvy American assistant, Valentine (Kristen Stewart). As their train glides through the mountains,

Maria learns that the director has died, altering drastically the speech she is to deliver. She must now summon the strength to publicly pay him tribute.

While in Zurich, she meets with a young stage director who implores her to reprise "Maloja Snake", but now as the older woman in the story.

This is a movie that builds its momentum on Maria's initial reluctance to portray the older woman, but more importantly on her relationship with Val. The two are so much more than boss and employee.

They rehearse Maria's part. They laugh together, they drink together, they argue --- and from this we observe hints about the true nature of their friendship, which at times carries subtle suggestions of a sexual nature. When Maria and Val take a break in their mountain retreat for a swim, Val goes in with bra and panties, Maria au natural. The scene fades to black --- a device Assayas uses liberally and effectively --- and our visual fades to our imagination.

There are also tense moments, as when Val drives their rental car down a treacherous mountain road in the approaching dusk to meet up with a date. Our sense of foreboding kicks in, anticipating the worst. And an unexpected twist at the end, handled ever so subtly by Assayas, will leave audiences pondering what happened.

While the ever-dependable, beautiful-at-51 Binoche is obviously the centerpiece of the story --- and she is absolutely fabulous --- it is Stewart's turn that is slightly more compelling. In Paris in February, she was named Best Supporting Actress for "Clouds of Sils Maria", becoming the first American actress in 30 years to be nominated, and the only American female ever to win a French César. (note: Adrien Brody was named Best Actor for "The Pianist" in 2003). At 25, Stewart is truly developing into one of the more talented stars around. As for Binoche, she was nominated for this film as Best Actress, her eighth nod for a César she has yet to win.

If there were any doubts about Grace Moretz maturing into a young adult after her portrayal of a teen hooker in "The Equalizer" opposite Denzel Washington, those doubts are erased with her bad-girl turn in this film.

Jo-Ann Ellis is set to portray the younger woman in "Maloja Snake", the role of Sigrid that Maria made famous 20 years earlier. She is almost an intimidating presence to Maria, even as Jo-Ann gushes and practically idolizes Maria at their initial meeting.

"Clouds of Sils Maria " --- Sils Maria is a village in the Swiss Alps --- is for mature moviegoers only. No special effects, no car chases, no gratuitous violence or nudity --- just a solid, all-encompassing story with vibrant characters, including the smaller roles, that we relish.