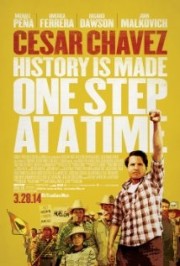 I so vividly remember Cesar Chavez and his plight to organize the 50,000 farm workers in California into a union known as the United Farm Workers (UFW), a part of the AFL-CIO. Because my father was a staff representative for the United Steel Workers, in solidarity with Chavez, there wasn't a grape in our home for many years.

Directed by Mexican-born actor Diego Luna, "Cesar Chavez" chronicles Chavez's (Michael Pena) long struggle as a civil-rights activist, and specifically his efforts to start a union. Along with Dolores Huerta (Rosario Dawson) and his wife Helen (America Ferrera), they formed the National Farm Workers Association, which later became the UFW.

Chavez's approach was always non-violence, despite the brutal confrontations with police and the wealthy grape growers, led here by a man named Bogdanovich (John Malkovich, who also is one of the producers of this movie).

Pena, a Mexican-American himself, like Chavez, is an excellent choice to play this strong-willed activist. His innate bravura comes across beautifully in this biopic by Keir Pearson. Portraying a dedicated organizer, and a non-violent man, is significantly more difficult than if Chavez had been a rabble-rouser. And Pena drives home his quiet resolve with ease.

Lest you think "Cesar Chavez" is not scintillating movie material, Luna has put forth a very important portrayal of a man determined to make a better life for himself and the workers he represents. It's a tale, all too forgotten, but one we musn't lose sight of.

He was called a great American hero. He founded the United Farm Workers (UFW) in 1966 which planted the seed for basic human rights and decent working conditions for migrant farm laborers in the United States. President Bill Clinton awarded him, posthumously, the Presidential Medal of Freedom, only the second time for a Mexican-American. He was Cesar Chavez, and his story is told in a stirring new film featuring a bravura performance by Michael Pena.

Grape pickers in the 1960's in California were considered chattel, only worthy to work the fields, and no more. In the eyes of their employers, the wealthy grape growers, they deserved no respect. With no formal education and speaking little or no English, these men, women and children were making as little as two dollars a day, enduring  physical and mental abuse, with little rest, no bathroom facilities, and no hope for a better life --- until the courageous, Arizona-born Chavez decided enough was enough.

Chavez created a credit union, funded by donations, that would keep the workers whole through the non-working winter months. He steadfastly encouraged laborers to stage strikes ("huelga" in Spanish) to protest the conditions. He organized boycotts against some of the biggest wine makers and grape growers in California, and despite negative comments from Ronald Reagan, and interference by Richard Nixon on behalf of the growers, managed to negotiate a collective bargaining agreement with the most powerful farm owners in the area.

Movies about social injustice in the workplace are not new --- "Norma Rae" comes quickly to mind. But "Cesar Chavez" is one story that has been waiting to be told on the big screen, especially with a Hollywood budget. Director Diego Luna has assembled a terrific cast, including America Ferrera (as wife Helen Chavez) and Rosario Dawson (as Dolores Huerta, co-founder of the UFW). John Malkovich, who also is Executive Producer, plays a cold-hearted grape grower named Bogdanovitch.

"Cesar Chavez" is a moving biographical piece that wastes not a minute in its portrayal of the man whom Sen. Robert F. Kennedy called "one of the heroic figures of our time".  The screenplay for "Cesar Chavez" is the second penned by Keir Pearson. His first? Best Picture nominee "Hotel Rwanda" in 2004.

Luna has infused his movie with plenty of real-life footage from the era, including a brief shot of the real Cesar Chavez, who died in 1993 at the age of sixty-six. But the heart and soul of this film is Pena. His magnificent performance punctuates Chavez' struggle to maintain a non-violent approach to achieve his goals --- which included a 25-day fast that nearly killed him --- and keep his large family intact. His relationship with his eldest child, son Fernando, estranged for a time, is particularly touching. Pena's turn is Oscar-worthy, but will it be remembered months from now?

As for Reagan, his public condemnation of the Chavez-led boycott was reprehensible. But history has a way of shining its light on the past. It's called the truth.