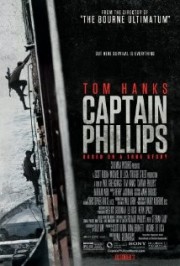 "Argo" and "Zero Dark Thirty" taught us that it is possible to take past real-life dramatic events and turn these heroic stories into edge-of-your-seat thrillers, even though we already know the outcome. And though "Captain Phillips" is based on the real Richard Phillips' book "A Captain's Duty: Somali Pirates, Navy SEALs, and Dangerous Days at Sea" (co-authored with Stephan Talty), director Paul Greengrass was heavily intent on creating a script by Billy Ray which would also explore the world of the Somali pirates.

In April 2009, Captain Rich Phillips (Tom Hanks) leaves his wife (Catherine Keener), two children and home in Vermont to travel to Africa to pilot the Maersk Alabama, a U.S. container ship, through the Gulf of Aden to Mombasa, Kenya. One hundred and forty-five miles off the coast of Somalia, four young Somali pirates attempt to board the ship. At first, they are rebuffed by the Alabama's crew with fire hoses, but a second attempt proves successful, and they are on deck.

Most of the crew has hidden way below in the engine room, but Captain Phillips and a few others are being held captive by the Somali pirate captain Muse (Barkhad Abdi) and his three skiff mates, Bilal (Barkhad Abdirahman), Najee (Faysal Ahmad) and Elmi (Mahat M. Ali). When an exchange for one of the pirates and Phillips goes awry, Rich finds himself aboard the Alabama's life boat with the four desperate men as a hostage.

The production of "Captain Phillips" was arduous and challenging. Sixty days were spent at sea filming on a working Maersk ship, two U.S. Navy destroyers and an aircraft carrier. But Greengrass was determined to have his film as realistic as possible, and the finished product is telling. It's unbelievably remarkable.

Hanks is such a dedicated actor that it should come as a surprise to no one that he is phenomenal in this role. Though we have seen some stellar performances thus far this year, with more to come, Hanks is a sure candidate for Best Actor come Oscar season. His depth and range of emotions are unsurpassed --- and all of this from someone we all feel is our friend. His career has been so diverse and accomplished, and portraying the heroic Captain Phillips is another in a long line of exemplary accomplishments.

The better story here, though, is the casting of the Somalians. Casting director Francine Maisler traveled to Minneapolis, Minnesota, which has the largest Somali-American community in the U.S. After holding an open casting call, Abdi, Abdirahman, Ahmad and Ali were grouped together and eventually earned the roles. These young men, no real actors among them, had a great deal to learn, and they are all vastly impressive in their roles.

Abdi's Muse, however, is an amazing portrayal. Looking malnourished, as most Somalians are, his strength in character is astounding. His actions and reactions are so nuanced that we forget he's actually acting. His role is another that should be remembered at Oscar time.

"Captain Phillips"  is a true action-packed drama. It's so real that you can almost smell the grime and grit in the small life boat. With outstanding acting and directing all around, it's a must-see on the big screen!

"Captain Phillips" is the best movie of the year, to this point, and Tom Hanks could be the front runner for another Oscar, his third. Director Paul Greengrass ("The Bourne Supremacy", "The Bourne Ultimatum") knows how to build and maintain suspense, even though the audience knows the outcome of the story (as in "United 93").

And the unsung heroes of this thriller, from a movie-making slant, are four men of African descent, who had never acted before.

One of them was selected to play the leader of the pirates/hijackers who managed to climb aboard an American cargo ship, the Maersk Alabama in 2009, and hold the captain and crew hostage. This was the first such abduction of an American ship in these waters in over 200 years, and the real-life incident induced most shipping companies to eventually hire armed guards on these vessels.

Born in Somalia, but living in Minneapolis since he was 14, Barkhad Abdi was cast as Muse, the English speaking Somali pseudo-fisherman who assumes command of the freighter. He tells Captain Phillips (Hanks) that he and his three cohorts want millions in ransom, that they are not linked to Al Qaeda, and are only interested in money. They reject the $30,000 cash in the ship's safe. Of course, the pirates answer to the operatives behind the hijacking (never seen, only referred to), and the ones who will reap most of the ransom money.

Captain Richard Phillips and his wife, Andrea (Catherine Keener), open the film in mundane fashion --- breakfast, followed by a trip to the airport, then hasty goodbyes amid perfunctory exchanges of "I love you".  For them, this ordinary beginning will evolve into something quite extraordinary --- we know it, they don't, although Andrea is wary. But the suspense has already started.

One morning at sea, Captain Phillips chides his men for overstaying their coffee break. He then heads to the top deck where he notices two small boats on radar heading towards his ship. He is fully aware of piracy activity in these waters, and alerts his crew to the same. When the seas become too rough for one of the skiffs, it turns back, leaving one small boat with four determined hijackers motoring for the Alabama.

This film is not about the what, why or where of the Maersk Alabama's

take-over --- it's all about the how, as in how do these men get aboard this massive ship, how do they gain control while being outnumbered 5-1, and how will the whole affair get resolved? Amidst these questions is the nearly flawless performance of Hanks. His final scene, while being debriefed after his rescue by Navy SEALs, and attended to by a no-nonsense, female Navy doctor, is palpably as emotional and disquieting as any several minutes recorded on film. For me, these moments cemented Hanks' Academy Awards nomination, which is sure to come.

With Hanks in line for a Best Actor nom, Abdi should be considered for a Best Supporting nod, and the buzz for that has already started. Without Abdi's meticulous performance, much of the film's human element would have been lost. To justify the Alabama's seizure, Abdi mentions the loss of Somali fishing opportunities because of foreign poachers who deplete the fish population. Does it gain the audience's sympathy?

But "Captain Phillips" is not only based on a true tale of human survival, it is a classic story of the haves vs. the have-nots, featuring brilliant cinematography by Barry Ackroyd ("United 93", "The Hurt Locker"), and pulsating music by Henry Jackman.  Not to be missed.