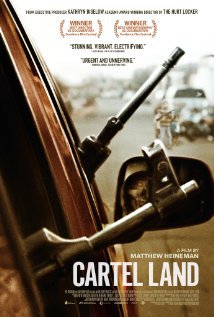 Filmmaker Matthew Heineman places himself in the line of fire more than once in this shocking and eye-opening real-life expose of the illegal drug industry in Mexico. Fictional films of the past do not do justice to the day-to-day terror inflicted upon the innocent victims of these ruthless drug cartels and their stranglehold on a country in turmoil.

Told from the perspective of two vigilante groups, one on the U.S. border in Arizona known as the Altar Valley, and the other in the Mexican state of Michoacán, "Cartel Land" illuminates the vast issues facing the people who want to make a difference, and change things for the better.

Leading the paramilitary group, Arizona Border Recon, Tim "Nailer" Foley is a veteran whose main goal is to prevent the Mexican cartels' drugs and violence from invading the U.S. He and his followers patrol the 52-mile-long "Cocaine Alley" along the U.S./Mexican desert corridor because the U.S. Border Patrol is understaffed and overworked.

In Michoacán, Dr. Jose Mireles, a small-town physician, has organized the Autodefensas, a group devoted to stopping the Knights Templar cartel. The drug cartels have been terrorizing Mexican citizens for many years, and the Knights Templar are a particularly vicious entity.

With literally no help from the Mexican government, the Autodefensas has made some headway into ridding many small towns of this vile scourge. But as Heineman's documentary progresses, we witness how human nature and greed can stall the work in progress, and undermine the good intentions of a few.

"Cartel Land" won both the Directing Award and Special Jury Award for Cinematography in the U.S. Documentary Competition for Heineman at the 2015 Sundance Film Festival. When watching some of the scenes, you wonder how he ever made it out of the experience alive. His work is outstanding --- and, at times, very depressing.

With so much rampant corruption, it appears as though Mexico will never solve its massive organized crime problem. And Heineman is not exposing this issue with answers at hand. Nor does he glorify Foley and his minions in their efforts. Representatives of both sides are brutally honest, and, personally, some of the sentiments espoused by Foley's followers are almost as frightening as the cartels'.

"Cartel Land" is an accomplished, and frequently disturbing, documentary about the drug cartels in Mexico, but it doesn't necessarily teach us anything new about the vicious, non-compassionate killers who ply their trade. Focusing on one major organization, Knights Templar, it's as if ISIS is at the U.S. doorstep. Grisly images of freshly decapitated heads are still a shock to the system.

After years of brutality in one of the larger Mexican states, Michoacán, (population over four million), where Knights Templar spread their reign of terror, one individual decided enough was enough. Dr. Jose Mireles formed a vigilante group of armed citizens, calling themselves Autodefensas (Self Defenses).

Over the course of several months, the Autodefensas managed to retake some 28 towns from the cartel. They were usually hailed as conquering heroes, and Dr. Mireles also served as a medical advisor with a sense of humor. When he was severely injured in a suspicious plane crash, the leadership temporarily went to another man who was not gifted with Mireles' oratory abilities, and the Autodefensas tried to save other Mexican towns, but they were treated as lawbreakers, and not to be trusted.

Whereas Mireles' people do not trust their own government --- calling their president an idiot, in one scene --- other Mexicans unabashedly prefer the federal troops to the vigilantes. Despite their reported successes, the Autodefensas are criticized for cartel-like behavior, such as raiding homes and preying upon women. Even Dr. Mireles, the great motivator and savior to many, is exposed as a womanizer by the very camera documenting his crusade.

Director and cinematographer Matthew Heineman, who was honored at Sundance this year for his extraordinary work  ---- call it courageous or call it crazy ---- also focuses his camera on a different sort of vigilantism, an American veteran named Tim "Nailer" Foley, who opts to patrol a section of the Arizona-Mexican border, calling his mission "Arizona Border Recon".

Foley lost his job and his home when the recession of 2008 hit, so he felt compelled to be the watchdog of drugs crossing into the U.S. Not a fan of illegal immigrants, he complains how the illegals aren't part of the system, they don't pay taxes, etc., etc. He does manage to recruit a handful of similarly-minded, gun-toting individuals. Like his Mexican counterparts, Foley questions the role of government in its border defense, and stopping the flow of illegal drugs.

Heineman is deeply imbedded with both the Autodefensas and Foley's militia. At times it seems amazing that he survived the shooting of his film. I found my heart pounding as Heineman, often with bullets flying all around, manages to film sequences straight out of a fictional movie or TV show. One of these included the round up of two particularly heinous cartel leaders, scum who were observed by horrified townspeople killing and dismembering innocent people.

"Cartel Land" opens and closes with night time shots of cartel members charged with cooking the meth, shown fully masked, who mix the ingredients as if they're part of a chemistry lab. One disturbing thought emerges from this film, that the vicious cycle of violence will be perpetrated for the foreseeable future. Indeed, one of the masked cooks says, in Spanish, that this will never end...and they hope it doesn't.