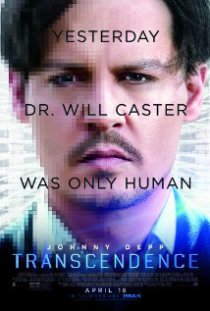 If I'm going to see Johnny Depp in a movie, then I would like him to be present, physically, for the entire film. In "Transcendence", Mr. Depp is on screen for a short while, initially, then only as a "head shot" for nearly the remainder of the film.

What an awful waste of talent. And since I'm not a huge science fiction fan anyway, this was even more disappointing for me.  Cinematographer Wally Pfister, making his directorial debut, shouldn't quit his day job, especially after accepting this dreadfully dull script from Jack Paglen.

Dr. Will Caster (Depp) is the foremost expert in artificial intelligence. He is married to Evelyn (Rebecca Hall --- a rather queer choice in casting), a fellow researcher, and together with their best friend Max Waters (Paul Bettany), they are striving to create an all-knowing machine with a complete set of human emotions.

But a terrorist group of anti-technology extremists is set upon destroying Will's work, no matter the means necessary. When Will is wounded by a crazed radical, his presence takes the form of his machine. Evelyn and Max aren't really sure if it is still Will, or the machine, making the decision.

It sounds good --- unfortunately Pfister doesn't have the wherewithal nor the screenplay to pull this off. I've always maintained that even the best actors cannot bring life to dead writing. And dead this writing is --- it couldn't be more plodding in its action and narrative.

Depp is given virtually nothing to do. Hall tries her best, but she simply doesn't fit this role. She is not an academic, nor a suitable partner for Depp. Bettany is fine, but also doesn't have a great deal to test his acting chops, other than standing around wringing his hands.

Morgan Freeman is on board as Joseph Tagger, a friend and colleague of the Casters. "Transcendence" would have been at least a little better had he been more present in the movie. Freeman always adds a certain positive vibe to all his roles --- and "Transcendence" could have used a huge helping of his cache.

In Johnny Depp's new movie "Transcendence", he is a brilliant scientist who wants to create a machine that combines all the brain power of every human being that ever lived, but that is also emotionally responsive and perceptive. He calls it a sentient machine of artificial intelligence.

However, a radical group of anti-technology crazies who call themselves R.I.F.T. (Revolutionary Independence From Technology), will go to any lengths to prevent Dr. Will Caster (Depp) from achieving his goal. Caster's wife Evelyn (Rebecca Hall), and his best friend Max Waters (Paul Bettany), are fellow researchers and supporters of his program. Morgan Freeman is Joseph Tagger, Caster's former mentor.

Hall is a very good actress, but she doesn't have the screen presence to carry a film on her back, as she is asked to do here. We don't buy Evelyn's relationship with Will at all, despite her many tearful scenes. The whole business with the R.I.F.T. organization is sketchy, at best. Who are these people and why does the FBI assign such a blase agent (Cillian Murphy) as its main investigator?

Actually, the script by Jack Paglen (his limited writing background includes "Battlestar Galactica"), is not a bad premise --- an entity that can reverse physical damage to the human body, even cure blindness, and who knows what else? But in the hands of first-time director Wally Pfister, an Oscar winner for Best Cinematography ("Dark Knight" films, "Inception"), "Transcendence" is too slow, too technical and ultimately boring.

Even an all-star crew made up of past Academy Award winners and nominees can't save this movie. Here are some examples: Mychael Danna, Oscar winner for music ("Life of Pi"), Nathan McGuinness, Oscar nominee for visual effects ("Master and Commander"), David Rosenbloom, Oscar nominee for editing ("The Insider") and George L. Little, costume designer for a Best Picture nominee ("Zero Dark Thirty"). With that impressive array of behind-the-scenes talent, it's astounding that this film is so lackluster.

Depp needed a hit to get his film career back on track after the shockingly mediocre "Lone Ranger". "Transcendence" is not that vehicle.