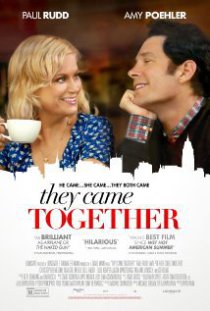 Who knew that a spoof of romantic comedies could be so hilarious, and entertaining? David and I saw this at the Chicago Critics Film Festival, of which we were a part (s chauffeurs for the event, we drove director David Wain to the Chicago premiere opening night at the fest), and a packed house at the Music Box Theatre in Chicago greatly showed their appreciation.

It is a rare thing anymore when critics and fans can agree on a movie, especially a comedy, so "They Came Together" is one of those unique examples. Amy Poehler (Molly) and Paul Rudd (Joel) star as two opposites who come together fatefully, and find love.

Molly owns an independent candy store which is being threatened with extinction because a large candy conglomerate is setting up shop across the street from her. Joel works for said Corporate Candy Company, so when Molly and Joel first meet, it's not exactly love at first sight. And, to make matters worse, Joel is still infatuated with his rather awful ex-girlfriend Tiffany (Cobie Smulders).

The entire story of Molly and Joel's relationship is told over a dinner date between them and their friends, Kyle (Bill Hader) and Karen (Ellie Kemper), in flashbacks. Part of the hilarity is watching Kyle and Karen's reactions to parts of the narrative, especially when Joel relates a sexual encounter with his Bubby (grandmother), played by Lynn Cohen --- it's priceless.

Along with directing, Wain is also responsible for co-writing "They Came Together" with Michael Showalter. It's a very clever script with a lot of laugh-out-loud moments. It can also be cringe-inducing, but overall, I'd have to say this is one of the funniest films to come along in a very long time. The last comedy we enjoyed this much was "Horrible Bosses" from 2011.

Poehler and Rudd are a hoot --- separate and together. The opening sequence showing the two of them taking showers alone, but on a split screen is a terrific beginning. We are also treated to Poehler acting like a klutz, pratfalls and all. She's awesome. Rudd is his usual charming self, and so incredibly gullible when Joel won't open his eyes to what is going on with Tiffany. It's downright hysterical.

Not everyone will appreciate some of the humor in "They Came Together". But a spoof is a spoof --- and this is a great one!

Rare is the movie comedy that sustains laughs for its entire running time. Director David Wain's "They Came Together", starring Paul Rudd and Amy Poehler, who make a naturally funny pair, manages to do just that. It is a riotous triumph in the romantic comedy vein.

But it's not your typical rom-com. It's a farce of the genre featuring pratfalls, absurdities and general buffoonery by its stellar cast. It is laugh-out-loud hilarious and begs to be seen at least twice.

The film opened the 2nd Annual Chicago Critics Film Festival this past May, and with a rollicking crowd of over 600 people in attendance, most of whom laughed themselves silly for the duration, it certainly had the feel of a big hit. But it's in limited distribution which could be a big mistake by Lionsgate because "They Came Together" is the perfect comic vehicle to be driven by word-of-mouth.

The quick synopsis is this: Joel (Rudd) and Molly (Poehler) are having a casual dinner in a New York City restaurant with Kyle (Bill Hader) and Karen (Ellie Kemper). Kyle eventually asks how they met, so much of the film is told in flashback. Joel and Molly essentially despise each other at first sight, but obviously things change.

But it is Rudd and Poehler who make this film work. They are masters of the silly moment and the sly smirk, performing sight gags galore. The only question is how did they manage to keep a straight face during filming? The answer is they probably didn't.

No need to relate any more. I dislike reviews and trailers of comedies that reveal every funny bit. But speaking of trailers, check this one on the web. If that doesn't make you chuckle, well --- just watch the movie in its entirety.