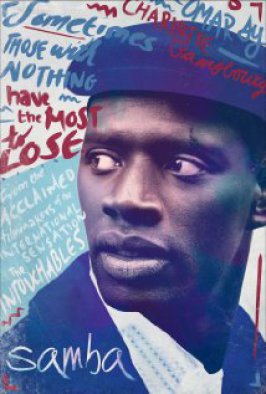 Omar Sy, the Parisian-born actor who won the 2012 César Award for Best Actor for his illuminating performance in "The Intouchables", stars as Samba Cisse, a Senegalese illegal immigrant trying to obtain a carte de sejour (a legal work visa) after 10 years in Paris.

Filmmakers Olivier Nakache and Eric Toledano, who also directed "The Intouchables", collaborate again, working from a script adapted from the novel "Samba pour la France" by Delphine Coulin, who co-wrote the screenplay with her sister Muriel.

Samba is detained after leaving his dishwashing job at a Parisian restaurant, and ends up at an immigration advocacy center where he meets Alice (Charlotte Gainsbourg), an executive on leave after experiencing a workplace meltdown (she smashed her cell phone on an underling's head --- more to come on that later). As part of her required therapy, she is assisting at the center, and what she sees is a real eye-opener for her.

Though repeatedly warned not to get involved with the detainees, Alice is drawn to Samba and his plight, and a friendship ensues. Samba is literally trying to stay one step ahead of the authorities until he can qualify for his visa.

"Samba" is both a love story and a somewhat diluted expose into the immigration dilemma --- not just in Paris, but worldwide. Though the film doesn't provide any answers, it does give voice to the millions who suffer these same situations daily.

Sy is marvelous. His ready smile and overabundant charm endear Samba to the audience immediately. He was present at the screening David and I attended, and he was very articulate and knowledgeable about the problems facing these illegal immigrants, even though he is native-born.

Gainsbourg has had some meatier roles in "Melancholia" and "Nymphomaniac Vol. I and II", but she is perfectly cast as Alice. We see vulnerability in Alice, a trait Gainsbourg hasn't had to focus on much before, and she's terrific.

Though "Samba" concerns a serious subject matter, the movie has many light and touching moments. I particularly loved the Christmas celebration amongst the workers at the center and the immigrants. Watching them dance and laugh together reminds us that deep down all people want to be accepted for who they are.

At our screening I was sitting next to an older gentleman --- and I use that term loosely --- who refused to shut off his cell. I was forced to get a manager, especially after his phone actually rang --- grrr! Thus, when Alice told Samba about her cell phone-smashing incident, I was so tempted to turn to this jerk and do the same. But I merely laughed instead. Some people ---

Imagine living a life, constantly looking over your shoulder to see if someone is watching you, about to crush your world. Imagine an existence where you change your identification so often you barely remember your own name.

"Samba" is a fascinating examination of a Senegalese immigrant, living in Paris for 10 years, until he is found out by the authorities. The film invokes humor and compassion without being preachy or overly analytical about the illegal immigration issue. Portrayed by César winner Omar Sy, we can appreciate the turmoil and struggle an undocumented person endures on a daily basis.

Samba is a huge teddy bear of a man who is imminently likeable. We first meet him at his job as a dishwasher, living in a small flat with his uncle, biding time until he can fulfill his dream of being a professional chef.

But in a sudden turn of events, his illegal status is discovered and he is ordered to leave France.

He enlists the aid of workers in an immigration advocacy center, including the inexperienced Alice (Charlotte Gainsbourg), who is there temporarily until she can mentally return to the corporate world. She left due to burn-out. The immediate attraction Alice feels for this handsome black man is the start of a subtle and endearing relationship between the two.

Samba is soon befriended by the gregarious and unconstrained Wilson (Tahar Rahim), a Brazilian native who is also in France illegally. The duo share some highly amusing adventures as they go from one menial job to

another, trying to stay below the radar of the French authorities. Samba's fear of heights is taken to new levels --- no pun intended --- when they are hired as high-rise window washers, one of the best sequences in the film, although the replication of the famous Coke commercial is a stretch.

Directors Olivier Nakache and Eric Toledano again collaborate with Sy, who won his Best Actor César for their exquisite film "The Intouchables" (2011). As Samba, Sy imparts a wonderfully articulate, and occasionally explosive, personality that is impossible not to admire. Paired with Gainsbourg, they embody two people with different needs, from very different worlds, who find the common ground to become good friends --- and maybe more. Her rather plain appearance vanishes when she smiles, lighting up any of her scenes.

Gainsbourg, one of France's leading stars, is a two-time César winner and six-time nominee. If you saw the back-to-back films "Nymphomaniac: Vol I & II" (2013), you'll remember her as the startling main character in those films.

As for Rahim, he is yet another César winner, named Best Actor for "A Prophet", a 2009 Academy Award nominee for Best Foreign Language Picture. In a departure from his usual dramatic turns, Rahim's performance in this film could have been annoying, but he is quite delightful and adds just the right amount of playfulness to the story.

"Samba" manages to be hugely entertaining, featuring a superb cast and expert direction, without abandoning its important message about a universal problem.