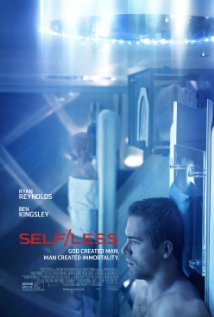 Wow! What a huge disappointment! David and I really like Ryan Reynolds, and, despite some of the snarky reviews he received for his role in "Woman in Gold", we enjoyed him in that film. So the fact that he had this movie with Ben Kingsley, Matthew Goode, Victor Garber and Michelle Dockery coming along --- it looked promising, especially with such an electric premise.

As I have stated so many times in the past, it is all about the writing --- great cast, good idea, can't salvage a poorly written script. Co-writers/brothers Alex and David Pastor have taken what could have been a science "future" thriller and turned it into a science/less dud.

Damian Hale (Kingsley) is a ruthless billionaire mogul, sounding more like someone out of the cast of "The Sopranos" than a successful industrialist. The very first scene gives the audience a taste of his vindictiveness, and how he amassed his fortune --- not a nice man.

We also soon learn that he has terminal cancer and a lousy relationship with his daughter, Claire (Dockery). His only hope of "survival" is a new process called "shedding" which is offered to him by a gentleman named Albright (Goode). To make this new transition, Hale must die, which he does while at lunch with his only friend and business associate Martin O'Neil (Garber).

Once Albright "sheds" Hale's consciousness into the healthy body of a much younger man (Reynolds), he begins his life anew as Edward. Of course, there's always a catch, and soon Edward begins having flashbacks of a strange woman, Madeline (Natalie Martinez) and her daughter, Anna

The tagline for "Self/less" is "If only I had more time to live my life --- " and the Albright character is constantly lamenting the fact that so many great minds, such as Albert Einstein and Steve Jobs, are dead. What could they have accomplished if they were still among the living?

This is my biggest complaint with this absurd experience. Hale's brilliant business mind is saved, but all Edward accomplishes is playing basketball, driving fast cars and sleeping with gorgeous women. Not once is Edward ever challenged to solve any world financial crisis or contribute to the greater good. So, what is the point of "Self/less"?

The answer is --- there is none. And it's not at all thrilling. Once again we can guess everything that is going to happen before it actually does. And I must comment on the ability of Albright  --- once his real background is identified --- to be so completely maniacal --- and a loving husband? Really? This script is an abomination!

The actors try their best, though Kingsley overacts terribly in his smallish role. Reynolds is okay, bless his heart --- and he looks buff. Goode, who is so good in other roles, is the best of the bunch, but, unfortunately, that's not saying much. He holds his demeanor in check, and exudes the right amount of creepiness and arrogance.

If you're a Dockery fan --- forget "Self/less". She's only present for a couple of scenes, and talk about wasting talent. The choice of Martinez was a poor one. She simply isn't up to the task. She was so whiny I wanted to slap her. Kinchen is absolutely adorable, though how you could put a child through one terrible scene after another is questionable.

"Self/less" is point/less. Yes, we are all aware that the one percent of the one percent can procure anything their hearts desire. The fact that the Pastor brothers created Hale as a thug doesn't play to the audience's sympathy. "Shedding" may or may not be in our near future, but "Self/less" doesn't have me worried.

There are many other great choices at the cineplex --- pick one of those.

"Self/less" is billed as a science fiction thriller, and no matter how it's defined --- science fiction or science future --- it won't work for moviegoers unless they're willing to suspend belief, at least for a couple of hours. So if you don't buy into the possibility of a dying man's consciousness being transferred to another man's healthy body, this film is not for you.

Not only is the uber-wealthy Damian Hale's (Sir Ben Kingsley) brilliant mind/thoughts/memory bank shifted from his cancer-racked body into a new, younger body (Ryan Reynolds), it's done in mere seconds. A mesh netting is placed over both faces, and after a brief procedure called "shedding", overseen by the mysterious Albright (Matthew Goode), voila! Old Damian dies and the new Damian awakens, retaining all of the former's mental faculties, not to mention access to his riches.

We're initially led to believe that the newly transformed body of Damian, now named Edward, was specifically created for a shedding, but we soon learn a more sinister explanation exists. And things get really complicated when a woman named Madeline (Natalie Martinez, TV's "Secrets and Lies", "Under the Dome") and her young daughter Anna (Jaynee-Lynne Kinchen) are introduced into the plot. The recently deceased Damian also has a daughter, Claire (Michelle Dockery), from whom he was essentially estranged. This sets up a rather poignant reunion later.

"Self/less" is written by brothers David and Alex Pastor, and directed by Indian filmmaker Tarsem Singh. None have what you would call an impressive resume, but their movie is sufficiently intriguing with good performances from the whole cast. That two characters are named "Madeline" and "Albright" I will assume is a coincidence. Other key roles are filled by veteran actor Victor Garber (The older Damian's closest friend, Martin O'Neil) and Derek Luke (Anton, who connects with young Damian on the basketball court).

The movie has several surprising twists, and will tug gently at your heartstrings, a la Warren Beatty in the 1978 remake of "Heaven Can Wait" when his character returns to the living with memories intact from his past. Kingsley's time on screen is short but effective. And Dockery (Lady Mary on "Downton Abbey") suspends her British accent in a minor role. She is capable of much more than what she is given to do as Claire.

One of the best turns in "Self/less" comes from Martinez as the distraught and conflicted wife who tries to make sense of what is happening in her life, all the while shielding her daughter from any potential emotional upheaval. Kinchen is an adorable 8-year-old making her film debut. She is rather remarkable questioning the enigma that is her father, and totally innocent as she interprets the reason for her parents' squabbling.

Reynolds again shows his dramatic acting chops on the heels of a superb performance in "Woman in Gold". He deftly portrays Edward gradually tiring of the playboy opportunities he is afforded, while realizing the greater importance of love and family.