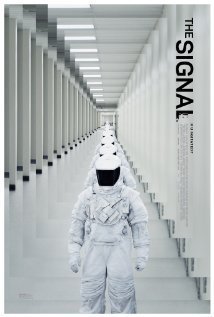 Three college kids traveling cross country decide to track down a hacker, code name Nomad, who's been bugging and taunting them on line. Of course, when they finally reach their destination, this person's address leads them to the middle of the desert --- in the middle of the night. None of this stuff ever happens during the day.

This is how "The Signal" begins. The three students are Nic (Brenton Thwaites --- recently seen as Prince Phillip in "Maleficent"), Haley (Olivia Cooke) and Jonah (Beau Knapp). Nic and Haley are involved in a romantic relationship which is tenuous at best. The fact that Haley is moving to California isn't helping matters.

But it is Jonah who is hot-to-trot to find this menacing hacker. We all know nothing good will come of this --- and, at the shanty in the desert, things go terribly wrong. When Nic regains consciousness, he finds himself in a sterile environment, locked in a room while creepy Dr. Damon (Laurence Fishburne), in a hazmat suit, observes his every move. And no one will explain what happened to Haley and Jonah.

The premise for "The Signal" is an interesting one, but the execution by director William Eubank is definitely lacking. The scenes at night in the desert are distinctly amateurish. I felt like I was watching a new version of "The Blair Witch Project". Perhaps that was Eubank's intention, though I highly doubt it, and it comes off a tad hokey and unrealistic.

The screenplay by Eubank, his brother Carlyle and David Frigerio is less than captivating. Though these three friends are in peril, or supposedly so, the writing never conveys a sense of urgency and doom that one would expect they should be experiencing in their situation. The entire film is lackluster and decidedly banal.

Thwaites, Cooke and Knapp are all acceptable, and do the best they can with their roles and the way they are written. And though some, like David, may find the opening sequence somewhat schmaltzy, I appreciated Thwaites' sweet demeanor as he draws a diagram for a small boy sitting at an arcade game.

My biggest complaint regarding the casting is Fishburne. He's totally a "fish out of water" as Nic's grand inquisitor. His lack of emotion, either sympathetic or threatening, is annoying, even if he is --- well, I won't divulge any more.

"The Signal" is completely underwhelming --- not enough science in the fiction. And certainly not thrilling ---

One formula for an effective thriller is the time-honored tradition of sending teens, or in this case, college-aged friends, on a journey into the unknown and mysterious. Combine that with computers and these kids' obsession with all things technical, the resulting story is science fiction that may be appealing to a general audience.

In "The Signal", the second feature from writer/director William Eubank, Nic (Brenton Thwaites), his girlfriend Haley (Olivia Cooke), and their friend Jonah (Beau Knapp) are on a road trip across the southwest en route to California where Haley will be spending the next year. But Nic and Jonah have additional reasons for accompanying Haley, namely to find a computer hacker known as Nomad with whom they have had antagonistic on-line communications.

The twist here is that Nic gets around with the help of elbow crutches. But he's fiercely independent, evidenced by his insistence on carrying three cups of coffee from a convenience store when logic would dictate Haley or Jonah do it.

Ultimately, their path leads to an abandoned, rickety hovel where Nic and Jonah venture into a pitch black basement. It's not long before they hear Haley's screams. They rush upstairs and outside, only to find Haley missing, and something more, something alien.

This sets in motion the rest of the film where Nic wakes up to find himself wheelchair-bound, drowsy and in the unfamiliar sterile surroundings of an apparent medical or research environment. He is being interrogated by the stoic Dr. Damon (Laurence Fishburne), but clearly something is not right.

"The Signal" features a strong performance by Thwaites (recently seen as Prince Phillip in "Maleficent") who very effectively displays all sorts of emotions. He is angry and puzzled about his situation, he's determined to figure out what has happened and where he is, and ultimately tries to escape --- all within the framework of an overriding dread.

In addition to the director, co-writers Carlyle Eubank (William's brother) and David Frigerio manage to hold us in its grip primarily because we care about the characters. Thwaites has an Ethan Hawke-like presence on screen, not a bad comparison for the youthful Australian actor. When Nic discovers a drastic alteration to his bodily make-up, Thwaites masterfully expresses his shock and dismay.

Unlike so many stories of this ilk, there is no major bloodletting, no alien creatures with razor-sharp teeth sneaking up on the protagonists. There is only the methodical behavior of Damon and his staff, all of them heavily protected from possible contamination, sporting hazmat suits and all-enclosing headgear.

I found this film to be sufficiently intriguing. It doesn't wear out its welcome at a brisk 95 minutes, and it poses enough of a mystique that you feel compelled to anticipate the outcome.