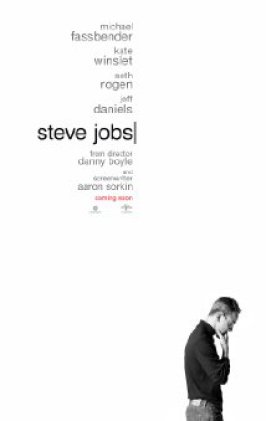 It takes a genius to write a screenplay about a genius. Aaron Sorkin, who considers himself more of a natural playwright, has taken the task of adapting Walter Isaacson's biography "Steve Jobs", turning it into a work of art.

Sorkin is a brilliant Academy Award-winning writer, and I can think of no one more qualified to turn Isaacson's best-selling book about the complicated, dysfunctional, ruthless and incredibly inventive Jobs into a feature film, which is set backstage before three different product launches.

Starring the accomplished Michael Fassbender as Jobs, and directed by the venerable Danny Boyle ("Trainspotting", "Slumdog Millionaire", "127 Hours"), "Steve Jobs" is truly unique as it focuses on these three events, which begin with the Macintosh intro in 1984 and end with the unveiling of the iMac in 1998.

Though the portrayal is often unkind, Jobs had a reputation of being difficult to work with/for, and the film gives a little background into why he was, at times, brutal in his interpersonal relationships. Sorkin also utilizes Jobs' denial of fathering his daughter Lisa Brennan, played by three different actresses: Makenzie Moss, age 5, Ripley Sobo, age 9, Perla Haney-Jardine, age 19, as a major storyline in the script.

The four other major characters who round out this film are Joanna Hoffman (Kate Winslet), Jobs' long-suffering, completely devoted marketing guru, Steve Wozniak (Seth Rogen), Jobs' original partner in their garage start-up and co-founder of Apple, John Sculley (Jeff Daniels), CEO of Apple, and Andy Hertzfeld (Michael Stuhlbarg), one of the original members of the Macintosh team.

Sorkin is recognized for his outstanding dialogue and acerbic wit, which comes off beautifully in "Steve Jobs". There are a few very funny moments in this movie. This script could only come to life through the acting of this remarkable cast. Every single actor in "Steve Jobs" is immensely gifted, with Fassbender leading the charge. He embodies Jobs with an intensity one can imagine only Jobs could maintain. It's a flawless performance, beginning with Jobs as a college dropout initiating the computer revolution, to the pinnacle product launch of the iMac.

Winslet has simply never been better, even considering her Oscar for "The Reader". Her transformation over the years throughout "Steve Jobs" is amazing --- considering I didn't even recognize her in the opening scene. She has grown considerably as an actress, and as Joanna, the only person close to Jobs who isn't really afraid of him, she's a scene-stealer every time she appears.

Daniels, who won an Emmy for his role on HBO's "The Newsroom", also written by Sorkin, is perfect as Sculley. He and Fassbender generate a genuine ease together, even in the contentious moments depicting the break in their relationship.

Rogen and Stuhlbarg are exemplary, with Rogen, once again, nailing a serious role. These are uncomfortable characters to play, but neither Rogen nor Stuhlbarg back down from the challenge. Jobs was hugely confrontational and straight-forward, and these two actors had to brace themselves for a barrage of animosity.

"Steve Jobs" will be at the forefront of many voters' minds come Oscar season. The entire cast and crew could be considered for a variety of awards ranging from Best Actor/Film/Director/Screenwriter to Best Editing.

Steve Jobs, the former Apple CEO who gave the world the personal computer, the iPod, iPhone, iPad and more, died in 2011 of complications from pancreatic cancer. He was only 56. Now, four years after his death, director Danny Boyle and writer Aaron Sorkin (from the book by Walter Isaacson) have released a remarkable film, an homage to Jobs that is as innovative as his myriad devices.

"Steve Jobs" is not your average biopic. It was filmed in three sequences that correspond to the three major product launches of Jobs' career. This is almost unheard of in the making of a motion picture, and it allowed its magnificent international cast to focus on Jobs' rise to fame, one episode at a time.

At the heart of the movie is a mesmerizing, iconic performance by Michael Fassbender, certain to be Oscar-nominated. The irony of Jobs' life is how he dramatically changed the way the world communicates, yet he, himself, had great difficulty in his own personal relationships, most notably with his daughter Lisa (played at age 19 by Perla Haney-Jardine), for whom he denied paternity. Fassbender is astonishing in every facet of the role.

Jobs was known for many personality traits. His closest friends and business partners, including Apple co-founder Steve Wozniak (Seth Rogen) and computer scientist Andy Hertzfeld (Michael Stuhlbarg, always a treat to watch) found him as infuriating as he was brilliant. His many underlings, none of whom have speaking parts in the film, were clearly intimidated by him.

Only one individual was able to rein Jobs in, when necessary, and that was Joanna Hoffman, his long-time marketing chief and stage manager for the public product launches. As Hoffman, Kate Winslet matches Fassbender with an intense performance that is equally Oscar-worthy. It's been a mostly long, dry run for Winslet (except for "Revolutionary Road") since she captured the Academy Award in 2008 for "The Reader", but she compensates for her lesser roles with a captivating turn here.

Although filmed in chronological sequence of the major product introductions in Jobs' life, Boyle makes excellent use of mini-flashbacks --- depicting Jobs and Wozniak developing their first computer in a garage, Jobs and John Sculley (Jeff Daniels, reuniting with Sorkin after HBO's "The Newsroom"), then head of Pepsi Cola, agreeing to lead Apple, etc.

"Steve Jobs" opens in 1984 with the initial launch of the Macintosh computer, but all the action takes place backstage. Jobs, Hoffman and Hertzfeld are arguing about the computer's capability of addressing the packed audience with an audible "Hello!". It's an elongated scene, like most in the film, that is totally engrossing, and it was specifically photographed in grainy 16mm to enhance the realism of the time. Later sequences get progressively higher definition treatments, up to the third product launch in 1998 of the iMac.

Typical of Jobs' personality and obstinacy, he refused to acknowledge the early pioneers who developed the Apple II, a cash cow for the company over a seven year period. Despite repeated pleas from Wozniak to recognize these people publicly, Jobs refused, preferring to focus on the present and the future. Their confrontation is one of the best scenes in the movie, and evidence of Rogen's abundant talent to play straight roles.

I should also mention that Katherine Waterston, as Jobs' high school girlfriend Chrisann Brennan and mother of Lisa, does a superb job as the court-ordered recipient of a measly $385/month support from Jobs. Her constant pleas for financial help from the multi-millionaire are memorably penned conversations by Sorkin.

Perhaps the most telling glimpse we get of Steve Jobs is his heartfelt talk with Lisa near the film's end. When she asked why he denied being her father for all these years, he could only pause and reply "I'm poorly made". A moment later, in an abrupt subject change and espying the clumsy Walkman attached to Lisa's hip, he declares proudly that he will give her 1000 songs in her pocket, an obvious reference to the coming iPod. He then invites her to stand backstage at the film's final product launch, the iMac.

Boyle doesn't delve into Jobs' life after the 1998 intro to the iMac. Nor do we see a closing statement about his death. It's as if Boyle and Sorkin wanted to leave audiences with the mindset that Steve Jobs lives on through his many innovations.