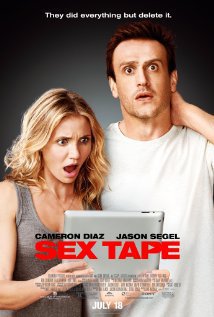 It's not difficult to determine the plotline in "Sex Tape", starring Cameron Diaz and Jason Segel as Annie and Jay. They portray a married couple with two children, trying to get their sex mojo back in one night of video-taped, unbridled passion by trying every position in the book "The Joy of Sex".

Not the most original idea to come along, but the hi-jinks that accompany their efforts in attempting to recover their three-hour marathon from  the "cloud" are quite amusing at times. Much of "Sex Tape" is pure nonsense, but throwing in characters like Annie's future boss Hank (Rob Lowe) delivers the much-needed comic infusion. Also on board are Ellie Kemper and Rob Corddry as Tess and Robby, Annie and Jay's best friends, who insist upon aiding their mortified buddies in destroying the video.

The more ridiculous subplot has Tess and Robby's son Howard (Harrison Holzer) trying in vain to blackmail Jay over the tape. It's ludicrous, not amusing, and actually the most profane part of the movie --- stupid.

While I adore Segel, who co-wrote the script with Kate Angelo and Nicholas Stoller, I didn't buy him as a couple with Diaz. I have never been a big fan of hers, but she looks extremely fit here, and I think she's actually getting better with age.

"Sex Tape" is nothing more than a mindless way to spend an hour and a half --- not great, not totally awful,. It provides a few laugh-out-loud moments, and nude shots of Diaz and Segel, and that's about it.

Okay, who among us has never fantasized about making a sex video of ourselves with our spouse or significant other? Today's technology would seem to simplify the process, even eliminating the need for a video camera when a smart phone will do. And a phone camera's 30-second limitation would not be a hindrance for most people.

But for a married couple named Jay and Annie, in the new comedy "Sex Tape", only a modern device, like an I-Pad, will suffice since their movie lasts three hours. As best friend Robby (Rob Corddry) points out, that's the length of the movie "Lincoln". "You guys did the full Lincoln!"

Jay (Jason Segel) and Annie (Cameron Diaz) have two children, and little time for sex. In their dating life, they had sex all the time, in a variety of places. You could say they were obsessed. But the rigors of family life now deprive them of much time for anything other than taking care of their kids, and making a living.

The openings scenes, which show the couple having sex everywhere, including between book shelves of a library, struck me as being quite puerile. However, they serve to set up the rest of the film, so I can rationalize it all as justifiable silliness. In between the absurdities, there are plenty of laughs as the plot eventually gets to the place where their sex tape becomes available for public viewing.

When Jay gets an anonymous text message thanking him for his video, it sets in motion a frantic attempt to retrieve a load of I-Pads, given to family and friends as gifts, before anyone can view the video. And it puts the predictable strain on his relationship with Annie since he, of course, bears the blame for the tape getting out.

Okay, the hunt for I-Pads is over-the-top, but who cares? Most importantly, it allows Rob Lowe to exhibit the popular comedic side of his acting talents. He plays Hank Rosenbaum, the head of Piper Brothers, and Annie's would-be benefactor for the blog she writes imparting motherly advice. When Jay and Annie "stumble" on Hank's mansion, in search of his gifted I-Pad, chaos ensues in what are the funniest sequences of the film.

Jeanne and I have said many times that a good comedy is probably the most difficult thing to achieve in movie making. Look no further than the two bad sequels to the original "The Hangover". But for the majority of the time, "Sex Tape" is quite entertaining. Thanks to some clever writing by Segel, and direction by Jake Kasdan, who worked with Diaz on "Bad Teacher", there is actual logic as the story unfolds.

But most of all, it is the superb comic timing of its two stars. Segel and Diaz are terrific together, playing off each other like the seasoned veterans they are. As for Diaz, the 41-year-old actress is in tremendous physical shape. She may single handedly revive the art of roller skating. What?? See the movie and it will make sense.