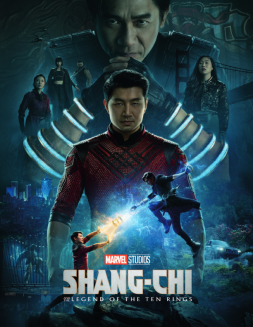 Directed by Japanese-American filmmaker, Destin Daniel Cretton, who also co-wrote the screenplay with Dave Callaham and Andrew Lanham, SHANG-CHI and the LEGEND of the TEN RINGS moves us from the mythical land of Ta Lo, to San Francisco, to Macao and back to Ta Lo.

As a child, Shang-Chi was taught by his father, Wenwu/The Mandarin (Tony Leung), “every possible way to kill a man”, while his younger sister, Xialing (Meng’er Zhang), could only watch from the sidelines. After their mother, Ying Li’s (Fala Chen) death, Shang-Chi is sent on a mission as an assassin, promising to return for Xialing.

Instead, he ends up in San Francisco as a parking valet with his best friend, Katy. He wears the only thing given to him by his mother --- an amulet --- but his father has sent his thugs to steal it. The craziest chase ensues with Katy driving a runaway city bus while Shang-Chi tries to fend off the attackers, who manage to confiscate his treasure.

From there, Shang-Chi, with Katy in tow, travels to Macao where his estranged sister runs a very successful underground fight club. After her amulet is also stolen --- in a fantastic fight/escape scene that commences over 100 stories in the air in a partially constructed skyscraper --- the siblings and Katy travel to Ta Lo to warn their auntie, Ying Nan (Michelle Yeoh), of their father’s plan to invade the ancient territory in search of their mother, whom Wenwu believes is still alive.

It just doesn’t seem possible, but the CGI continues to astound. Though some are put off by this art form, SHANG-CHI and the LEGEND of the TEN RINGS demonstrates how immensely entertaining it can be. Whether it’s the parting of a massive forest or the parting of an army using the magical 10 rings, it’s all quite amazing.

And though these computer-generated images are worth the price of admission, they’re not the best part of the movie. The script is loaded with hilarious repartee, making SHANG-CHI and the LEGEND of the TEN RINGS wildly fun. But it isn’t just the clever banter. The martial arts fight scenes are choreographed like a breathtaking ballet.

Add the drop-dead gorgeous costumes by Kym Barrett and the captivating soundtrack from Joel P. West --- all of it creates an overall beauty that is spectacular. And whatever you do --- stay put in your seat throughout all the final credits.

Sometimes it’s better to go into a film not knowing much of anything about it. Such was the case, for me, with SHANG-CHI and the LEGEND of the TEN RINGS.

It starts off innocently enough with Katy (Awkwafina) and Shaun (Simu Liu) thoroughly enjoying their jobs as car valets at a posh hotel in San Francisco. However, once Shaun takes on the role of his past as Shang-Chi, he must confront his father Wenwu (Tony Leung) who wants to dominate the world. This is no small task considering Wenwu possesses the fabled 10 Rings --- wearing five on each arm --- and has been immortal for something like the past 1000 years. That’s right --- he never ages and cannot be defeated by any beast, human or otherwise, as long as he has these 10 rings.

With a visual-effects crew alone of over 500 people, SHANG-CHI and the LEGEND of the TEN RINGS features some of the most astounding stunts and excitement ever seen on the silver screen. The film also features some of the most incredibly imaginative creatures since the original STAR WARS almost 50 years ago. The faceless furry things that behave a bit like modern canines are certainly entertaining.

A movie like this, with its intense battles, amazing effects and pulsating music requires some degree of gentility and humor. That’s where Awkwafina comes in and she is perfect. Her friendship with Shaun runs through the storyline, courtesy of director Destin Daniel Cretton and his co-writers Dave Callaham and Andrew Lanham. Cretton helmed the underrated Woody Harrelson/Brie Larson effort THE GLASS CASTLE in 2017. When Shang-Chi and his troops are preparing for the ultimate battles against Wenwu, Awkwafina steals the show with Katy’s archery training and subsequent contributions in the fight.

The beautiful Fala Chen stars as Li, Shang-Chi’s mother and Meng’er Zhang makes her big screen debut as his sultry sister Xialing. Famed Asian actress Michelle Yeoh delivers an important turn as the siblings’ auntie.  An uncredited Ben Kingsley is the only non-Asian in the cast in a very funny performance.

I never thought I would write that a Marvel movie was the best of the year or even one of the summer blockbusters, but here we are. Jeanne does not exaggerate when she says as much. This is a special film that must be seen on the big screen. And as usual with Marvel, stick around after the lengthy credits for a surprise, as if you Marvel nerds --- and I mean that in a most respectful way --- didn’t know.