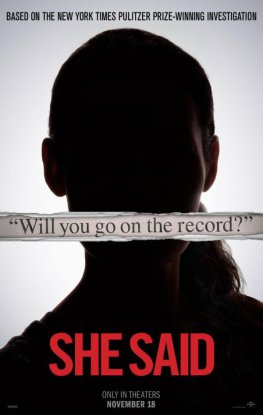 Thanks to the tenacity of two New York Times reporters, Megan Twohey (Carey Mulligan) and Jodi Kantor (Zoe Kazan), movie mogul --- and horrific serial predator --- Harvey Weinstein is currently serving a 23-year sentence in prison for sexual assault and third-degree rape. Based on their 3,321-word article published on page one of the New York Times on October 5, 2017, what began as a concerted effort to bring one sleazeball to justice, would lead to a Pulitzer Prize for public service and the 2019 best-selling book, “She Said: Breaking the Sexual Harassment Story That Helped Ignite a Movement”, by Twohey and Kantor.

Now, that book has become the film SHE SAID, produced by Plan B and Annapurna Pictures after the rights were purchased in 2018. Directed by Maria Schrader from a screenplay by Rebecca Lenkiewicz, this gripping and highly satisfying account of Twohey and Kantor’s work features powerful and accomplished women learning the truth and exposing it.

Both Twohey and Kantor are mothers which heightens their need to tell this story and seek justice for the women who were abused. It took incredible strength and courage to pursue men of power who would stop at nothing to prevent the salacious details of their escapades coming to light. It also required immense perseverance to doggedly track down the women who were the victims.

Many simply weren’t willing to put themselves through the torturous ordeal of being the first to step forward, thus opening themselves up to more abuse and ridicule. And many other women had been coerced into signing non-disclosure agreements after receiving financial settlements.

The web of control and deceit was so encompassing that Twohey and Kantor struggled to get any women to go record. Finally, Ashley Judd, who plays herself in SHE SAID, agreed to step up and be heard as she was one of Weinstein’s victims. Two others featured in the New York Times article were Laura Madden (Jennifer Ehle) and Zelda Perkins (Samantha Morton). Each had worked at Miramax, Weinstein’s studio, and had their own horror stories to impart.

The bravery of all these women cannot be denied. And it’s what makes SHE SAID so riveting. Mulligan, Kazan and Patricia Clarkson, who plays Rebecca Corbett, the assistant managing editor at the Times during the investigation, are all captivating. Each has their own special screen presence and credibility which makes their performances that much more believable.

There have been other superb movies about monumental efforts in journalistic reporting, like ALL THE PRESDIENT’S MEN, SPOTLIGHT and THE POST. Now SHE SAID has a place in that lineup. It’s a no-nonsense account of a heralded takedown of a vile criminal, which sparked a resurgence in the #MeToo movement. There is more work to be done, but Twohey and Kantor must be commended for their astonishing efforts.

Powerful men, especially in Hollywood, have held sway over the lives of women for decades. SHE SAID chronicles the efforts of two female New York Times investigative reporters whose dogged pursuit of accusations of sexual assaults by Miramax mogul Harvey Weinstein led to his grand jury trial. While Weinstein’s abhorrent behavior is the catalyst for SHE SAID, the film is far more focused on the journalists and the women they interview.

This is a movie that had to be made. Reminiscent of the 2015 Best Picture winner SPOTLIGHT, SHE SAID is a totally compelling account of the determination of Megan Twohey (Carey Mulligan) and Jodi Kantor (Zoe Kazan) who --- despite moments of self-doubt about their involvement --- managed to secure the testimony of enough women accusers of Weinstein to publish their frontpage story over five years ago. The pair also wrote a book on which the remarkable screenplay (Rebecca Lenkiewicz, IDA) is partially based.

Mulligan and Kazan render phenomenal performances. Their single biggest obstacle occurs when the women, many of whom signed legal NDA’s or received hush money settlements --- were reluctant to come forward, either “on the record” or even anonymously. The most emotional moment in this film comes when Ashley Judd, playing herself, calls Kantor to commit to going on the record. Kazan’s reaction is priceless and tear-inducing.

Twohey and Kantor receive professional support from then assistant managing editor Rebecca Corbett (the always engaging Patricia Clarkson) and then executive editor Dean Baquet (excellent turn by Andre Braugher). Clarkson’s character advises her intrepid reporters how to proceed at precarious times of the investigation while Braugher’s character is not intimidated by --- and effortlessly stands up to --- Harvey Weinstein --- mostly portrayed by his voice on phone calls. Clarkson and Braugher are the epitome of professional journalists.

Other standout portrayals belong to Jennifer Ehle and Samantha Morton as former Miramax employees who worked for Weinstein’s company and were invaluable to Twohey and Kantor. And because the movie was filmed during the pandemic when the New York Times’ offices were shuttered, director Maria Schrader and her crew were able to use the actual premises where the story was hatched.

SHE SAID is exciting, suspenseful, inspirational and entertaining, ably assisted by the music from three-time Oscar nominee Nicholas Britell. Much like the death of George Floyd triggered the BLACK LIVES MATTER movement, the extraordinary efforts of Twohey and Kantor and the eventual conviction of Weinstein were instrumental in the explosion of the #MeToo movement. And their reporting prowess has had global impact even now in terms of cultural changes involving the rights of women in the workplace. SHE SAID is another powerful truth-based story that should not be missed.