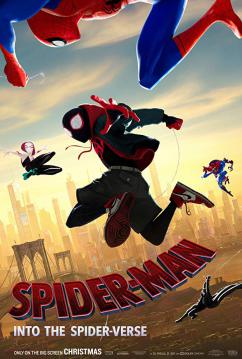 Based on Marvel Comics' character Miles Morales/Spider-Man, SPIDER-MAN: INTO THE SPIDER-VERSE is a revolutionary computer-animated adventure featuring alternate versions of the Spider-Man character from alternate universes. The end result is a superbly written story, with excellent voice acting, unique animation and a great deal of humor, to boot.

Miles (voiced by Shameik Moore) is a bright high school student focusing on fitting in at his new school in Brooklyn. He is much loved by his strict father, Jefferson (voiced by Brian Tyree Henry), a policeman who doesn't appreciate Spider-Man (voiced by Chris Pine) and his mother, Rio (voiced by Luna Lauren Velez), a nurse. The only person Miles can really talk to is his Uncle Aaron (voiced by Mahershala Ali), who is estranged from his brother Jefferson.

When Miles and his uncle travel to a secret place along the subway tracks, Miles is bitten by a radioactive spider. At first nothing seems different, but the next day at school Miles keeps sticking to things, including the blonde hair of the new student named Gwen Stacy (voiced by Hailee Steinfeld).

Now it's up to Miles and all of the alternate Spider characters --- Peter B. Parker/Spider-Man (voiced by Jake Johnson), an old, out-of-shape version, Spider-Man Noir (voiced by Nicolas Cage), Spider-Ham (voiced by John Mulaney), Peni Parker (voiced by Kimiko Glenn), a young Japanese girl from a futuristic universe and, to Miles' great surprise, Spider-Gwen, the girl from high school --- to create a new "goober" and blow up the Super Collider, sending all of these other Spider versions back to their own universes.

Okay, sounds a little crazy --- and confusing --- but it's not. SPIDER-MAN: INTO THE SPIDER-VERSE is truly highly entertaining and great fun. I was shocked by how good the writing really is. The story was conceived by Phil Lord, who co-wrote the screenplay with Rodney Rothman, based on the Marvel Comics character Miles Morales by Brian Michael Bendis and Sara Pichelli. Miles is a terrific character to build around, and Lord and Rothman keep the dialogue snappy and packed with superior wit.

What really sets SPIDER-MAN: INTO THE SPIDER-VERSE apart is the animation. By combining CGI Animation with many varied comic book techniques, the movie has the feel like "you walked inside a comic book", which is what Lord was going for. The overall effect is amazing with 142 animators working to bring this Spider-Verse to life.