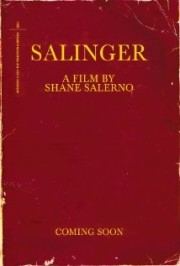 students --- was written by the elusive and reclusive J.D. Salinger, a literary figure who has grown larger than life. In his documentary, director Shane Salerno has brought Salinger out of the shadows and into focus as a fascinating, though deeply troubled, individual, seemingly obsessed with anonymity.

Though "Salinger" doesn't have the panache of a doc like "20 Feet From Stardom", Salerno does manage to infuse a great deal of background into the whys and hows of Salinger's most important creation, Holden Caulfield. I suppose if one is already aware of Salinger's distinctly unique back story, particularly his wartime efforts, then perhaps this film would not hold as much interest. But for those of us who are not Salinger aficionados, like David and me, we found this movie to be quite engrossing.

Salerno employs mostly archival footage of Salinger, with a never-before published photo of him working on "Catcher" during World War II. Salinger went into hiding in Cornish, New Hampshire, in the 70's, and remained there until he died at age 91 in 2010. Though it has come to light that he corresponded with many young female writers (he liked them young --- very young), he refused to grant interviews and was rarely seen in public.

Salinger resided in New York City as a young man, where he frequented the famous watering holes made popular by fellow writers. Despite the concerns of others about their potential at success, Salinger was always confident that he would become a stand-out in the literary world.

He was obsessed with being published by The New Yorker magazine, which was the standard bearer for achievement in the world of composition. Though he was rejected again and again, he never gave up, and finally in 1948 they published his short story  entitled "A Perfect Day for Bananafish", after which The New Yorker became a home for much of his work.

Though I (and mostly David) was expecting "Salinger" to be dry and unappealing in focus, instead, Salerno's depiction is intriguing and distinctly engaging. What makes people so obsessed with Jerome David Salinger? Does Holden Caulfield really deserve the verve and the blame for so much that has transpired in his name? See "Salinger" and make that determination yourself.

I was not looking forward to our nighttime screening of this film, but what a surprise! "Salinger"  proves that the human subject doesn't necessarily have to be likeable to make a good film. This excellent documentary, about the author of one of the world's most controversial books, is unexpectedly entertaining despite its two hour running time.

Director Shane Salerno ("Savages") has assembled an engaging, seamless compilation of interviews, archival footage and actors re-enacting a variety of scenes that result in a compelling video. Jerome David Salinger, better known as J.D. (Jerry to his friends),  was an egomaniac, but we can cut him some slack given his service in the army during World War II.

Who knew that the enigmatic writer of "The Catcher in the Rye" landed on UtahBeach on D-Day, saw combat during the Battle of the Bulge, and later was witness to some of Nazi Germany's greatest atrocities?

Salinger was obsessive about his writing, particularly about being published in The New Yorker, the most prestigious publication of his day. When Hollywood botched, according to him, the film version of one of his novels, he vowed never to have another movie made based on any of his works. Just before he died he set up a trust to ensure that that would be upheld, especially with "The Catcher in the Rye", sought after by the likes of Steven Spielberg and Harvey Weinstein.

Highlights of this film include interviews with famous writers like E.L. Doctorow, Tom Wolfe, Gore Vidal and Robert Towne, plus brief snippets with celebrities Philip Seymour Hoffman, Martin Sheen and Edward Norton. Salinger's daughter Margaret is seen in a sit-down with Katie Couric, and when asked about her relationship with her father, replied that there was none. His short-lived affair with Joyce Maynard, 35 years his junior (he was 53, she was 18 when they met) is discussed in detail by Maynard. Other relationships, including one with a 14-year-old girl he met on the beach when he was 30, and a brief marriage to an ex-Nazi woman, are examined.

Much of the film centers on the influence of "The Catcher in the Rye" on society, in general, and, in particular, on two notorious gunmen of the 20th century, Mark David Chapman and John Hinckley, Jr. Chapman, who gunned down John Lennon in 1980, and Hinckley, who failed in his assassination attempt on Ronald Reagan in 1981, both attribute their experience reading about the book's protagonist, Holden Caulfield, as factors in their aberrant behavior.

It should be noted that the original music by Lorne Balfe goes a long way in making this film effective. Some of the more mundane sequences of Salinger's life come across as exciting moments because of the dramatic musical background. But the bottom line is this: whether you have read "The Catcher in the Rye" before, or forgotten what you read years ago, or never picked up the book at all, this documentary may compel you to find a copy.