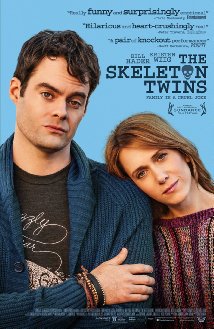 Dialogue-driven films are, by far, the most difficult to keep from going off the rails. Screenwriters for "The Skeleton Twins", Craig Johnson, who also directs, and Mark Heyman manage to construct a deft, and often funny, portrayal of a sibling relationship.

Maggie (Kristen Wiig) and Milo (Bill Hader) have not seen each other for 10 years. An attempted suicide on Milo's part brings Maggie to his side as he lies recovering in an L.A. hospital. After some minor wrangling, Maggie convinces Milo to return to upstate New York, where they were raised, and she is currently residing.

Milo has never met Maggie's husband Lance (Luke Wilson), a "really nice guy" whom she cannot stop cheating on. But Milo and Lance hit it off despite the fact that Milo is gay, and Lance is an overgrown frat boy.

What Milo doesn't realize initially is that Maggie is suffering from deep-seeded issues of her own. As they spend more time together, and grow closer once again, these twins realize how much they really need each other.

It's the writing, stupid --- a constant mantra of mine --- and Johnson and Heyman have proven themselves excellent screenwriters. The conversations between Maggie and Milo feel real --- the joy and pain shared and meaningful. It takes a while for these two to reconnect, which helps with the pace of the film. And once they do, their love for each is palpable.

Wiig and Hader, SNL alums, are perfectly matched. It's pure joy to watch them work together again, but to be clear, "The Skeleton Twins" is not a comedy. It is extremely funny, at times, but Johnson and Heyman have taken it upon themselves to tackle some serious issues, such as suicide, marital infidelity and underage sexual relations.

And Wiig and Hader are well-suited to tackle these issues as actors. Often comedic performers are not considered for dramatic roles, but any concerns are quickly dispelled. One of the most memorable scenes in "The Skeleton Twins" features Wiig and Hader slow dancing in Halloween costumes --- no dialogue --- just a sister and brother sharing a meaningful moment.

The supporting cast deserves praise as well. Wilson is sufficiently ebullient as Maggie's loving, unsuspecting partner. He's so wrapped up in his daily minutia, he can't see that she's not happy. And when he does, it's already too late --- and Wilson handles the character well.

"The Skeleton Twins" is a strong, solid film with nuanced performances by an eclectic cast. It could prove to be one of the best of the year.

With a cast that includes Kristen Wiig, Bill Hader, Luke Wilson and Ty Burrell, you pretty much go into the cinema anticipating a comedy. While there are undeniably funny moments in "The Skeleton Twins", there are many dire situations. It is a superb film with impressively superior performances from all of the above.

Milo (Hader) and Maggie (Wiig) are siblings who, despite growing up in a dysfunctional family environment (an unseen suicidal father, phony mother played by Joanne Gleason), shared a fun childhood. We see in flashbacks how they enjoyed playing dress up, a prelude to later scenes where Milo reprises his feminine get-up one Halloween night. But the pair become estranged for 10 years. He's living a dull existence in L.A., she's in New York state, in an unfulfilling marriage to husband Lance (Wilson).

A failed suicide attempt by Milo, which oddly prevents a similar act by Maggie, leads him back to the Empire State, where he moves in with his sister and Lance. Brother and sister reminisce, anxious to fill the void left by all the years of non-communication. Meanwhile, Milo looks up a one-time gay partner, Rich (Burrell), trying to rekindle the happiness he once knew, except that Rich has a 16-year-old son, and a girlfriend.

Thankfully, the writing by Mark Heyman ("Black Swan") and director/co-writer Craig Johnson is intelligent and mature. Yet "The Skeleton Twins" alternates between inane situations and grim moments. Milo gets off on nitrous oxide provided by dental hygienist Maggie which has them giggling like kids, leading to Maggie pretending to pass gas. And certainly one of the movie's highlights has them performing a pitch-perfect lip-sync together to Starship's "Nothing's Gonna Stop Us Now".

But there are underlying threats to their respective mental health, menaces that are revealed in explosive fashion as forbidden secrets are shared, not always willingly. The film reinforces that some things said in haste, or anger, can be forgiven, but never forgotten.

They say that comedy is the most difficult aspect of being an actor. Yet here are Hader and Wiig, who have made us laugh for years on SNL, and in other film roles, now putting lumps in our throats with their dramatic turns. Comics at the top of their game, they have challenged themselves with a script that could have been maudlin or overly sentimental in lesser hands.

Bill Hader and Kristen Wiig have taken career risks with "The Skeleton Twins". And we are fortunate that they did.