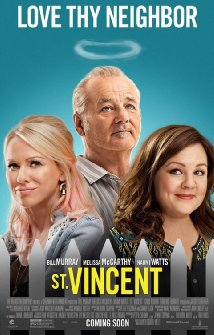 It's hard to believe Bill Murray, who plays the curmudgeon Vincent so

convincingly in this film, is the same Bill Murray who showed up recently --- in a tuxedo --- for George Clooney's wedding in Venice. While watching "St. Vincent", one would never think that would be possible.

Vincent looks like he hasn't showered in a week, he wears the same nasty outfit, his hair is greasy, his house is filthy, and most of the time, he's drunk --- not the most pleasant person to be around. But he is semi-kind to the pregnant stripper Daka (Naomi Watts), who services him once a week.

And he cares for a patient with Alzheimer's by faithfully doing her laundry every week. It is the pressing need for cash to help Daka and pay off his gambling debts that forces Vincent to start "babysitting" the 12-year-old boy, Oliver (Jaeden Lieberher), who just moved in next door.

Oliver's mother Maggie (Melissa McCarthy) abruptly left Oliver's father because she was sick and tired of his constant philandering,  as Oliver explains everyone knows because she posts it all on Facebook. But, she has a job in a hospital which requires long hours, and there is no one else around who can help watch Oliver. So Maggie is compelled, sort of, to rely upon Vincent.

And though "St. Vincent" can seem predictable in its outcome, getting there is all the fun. Murray and Lieberher are positively wonderful together. As they tool around in Vincent's beat-up old Chrysler convertible (of course, it never rains), the two of them begin to like and respect each other. Vincent shows Oliver the ropes --- fighting, gambling, drinking --- and Oliver manages to see the goodness in Vincent.

Murray obviously never listened to WC Fields' old adage about never working with kids. But he couldn't possibly be a second banana to anyone --- not even a cute kid like Lieberher. He's delightfully obnoxious and patient --- a grand mixture of many emotions, and terrific at emoting all of them. It's a tour-de-force performance by Murray!

Lieberher is destined for great things. Not only is he adorable, but he can act. Obviously, he's not shy about public speaking, even for a  kid his age. His school speech at the end of the film is impressive. Most adult actors couldn't pull off a scene like that. And he's already mastered the art of deadpan delivery.

McCarthy is thankfully less effusive than usual. It's a good role for her and she does a fantastic job. There are many scenes when you think she'll simply crack up because Murray is hysterical, buts he maintains her composure and soldiers on. Watts is okay --- though I wasn't wild about her Russian accent --- nor does she look Russian. But it's not enough of an issue to spoil any part of "St. Vincent".

Chris O'Dowd is fabulous as Brother Geraghty. He's amazingly talented, and has such a wide range in his acting repertoire. His pithy classroom comments are perfectly delivered, and his facial expressions match.

But none of this would be possible without writer/director/producer Ted Melfi. using inspiration from his own real-life situation involving his niece, whom he and his wife adopted following his brother's death. Melfi has constructed a meaningful, touching and often hilarious screenplay. And by utilizing the exceptional talents of the entire cast, he has solidified his path in films.

With a halo hovering over his head on the "St. Vincent" promotional poster, Bill Murray has that wry smirk that says "I'm not really a saint" --- and he would be right, at least about his character.

Vincent is an alcoholic gambler (he loves to play the ponies), living in a ram-shackle house, with an overdrawn bank account and a loan shark enforcer (Terence Howard) on his back. He does make frequent visits to a nursing home to see a beautiful, but Alzheimer's-afflicted woman named Sandy (Donna Mitchell) --- so he's not a total loser.

When new neighbors move in next door --- single mom Maggie (Melissa McCarthy) and her young son Oliver (Jaeden Lieberher) --- Vincent's comfortable status quo is threatened. That includes a sexual relationship with a Russian stripper, Daka (Naomi Watts), in addition to his other foibles.

"St. Vincent" is the perfect vehicle for Murray. He can be obnoxious and irreverent, yet still loveable at the same time. When Maggie, an MRI technician, is desperate for a babysitter, she turns to Vincent --- at $12 an hour. Thus begins a warm and touching friendship between Vincent and Oliver, through which we get to know the man behind the facade.

This is as good as it gets for a Bill Murray performance. First-time feature writer/director Ted Melfi has gleaned superb turns from the rest of his cast, as well. McCarthy, in a semi-dramatic role, is not tethered to a script that relies on vulgarities or her trademark physical humor. She is terrific. Watts is a treat as Vincent's reluctant caregiver. Chris O'Dowd steals every scene he's in as Brother Geraghty, Oliver's Catholic grade school teacher.

But --- a movie with a child actor sharing center "stage" cannot work without a credible performance there. Most thankfully, 11-year-old Lieberher is a wonder. He will steal your heart much like he does the curmudgeonly Vincent. This young untrained talent has already completed a yet-to-be released picture playing the son of Michael Shannon. And he is scheduled to shoot a new movie opposite the likes of Bradley Cooper, Rachel McAdam and Emma Stone.

I love a movie with authentic laughs. And when that movie puts a lump in my throat, it's even better. "St. Vincent" is such a film.