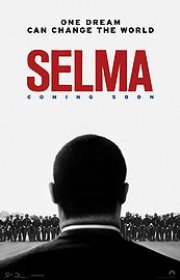 There has been much written and discussed regarding director Ava DuVernay's sense of the relationship between Dr. Martin Luther King Jr. (David Oyelowo) and President Lyndon Banes Johnson (Tom Wilkinson). Personally, I feel she does an exemplary job giving the audience a true feeling of their intense and basically non-combative alliance.

In January 1965, King arrives in Selma, Alabama to assist with the non-violent effort already in place to register black citizens to vote. But the segregationist Sheriff Jim Clark (Stan Houston) holds nothing back in his endeavors to stop this movement, including intimidation, arrests and killings.

The idea of a peaceful march from Selma to Montgomery, Alabama is spawned, but it will take three efforts, and assistance from Johnson to accomplish. A major obstacle for King and his fellow organizers is George Wallace (Tim Roth), the governor of Alabama --- and one of the worst segregationists in the South.

"Selma" is arresting --- and so beautifully constructed. The script by Paul Webb is inspiring and wonderfully written. There are so many excellent scenes, but my favorite is the one showcasing President Johnson's smack down of Gov. Wallace, who in meeting with the President, informs him that he has no intention of aiding Dr. King or putting a stop to the violence. Johnson's response is stinging and extremely satisfying --- you must see the film to experience it.

Oyelowo's portrayal of King is exactly what Dr. King was --- a force to be reckoned with --- and stands an excellent chance of an Oscar nomination. This is not a caricature of King --- it's an honest, moving and accurate depiction of this amazing, yet flawed, civil rights leader. King was only 36 in 1965, which is astonishing when one considers his immense wisdom and supreme commitment to the righteous causes he defended.

DuVernay could not have hoped for a better  King --- or Johnson. Wilkinson is perfectly cast as the driven, good ol' boy from Texas, hell-bent on passing the Voting Rights Act of 1965. He's so good, you actually forget he's not the real LBJ.

Carmen Ejogo stars as Coretta Scott King, the long-suffering and staunch supporting wife of Dr. King. Though it's a smaller role, it's a necessary one, and Ejogo gives a quietly superb performance. "Selma" is very much about the human side of Martin Luther King Jr. He struggles on all fronts, as he deals with the needs of his wife and family versus the needs of all of the members of his movement. I love the emotional scenes between Ejogo and Oyelowo --- they are poignant and deeply moving.

"Selma" is a movie that should be required viewing. It will be 50 years this August that Johnson signed the bill giving everyone the right to vote, but we are still struggling with many of these same issues today. How is that even possible?

Until the riot-torn, racial unrest of the 1960's, Selma was an unknown, sleepy little town in Alabama. But when Martin Luther King Jr. and others organized a march from Selma to the state capitol of Montgomery, the end result was the 1965 Voting Rights Act signed into law by President Lyndon B. Johnson. Selma was no longer unknown.

If justice prevails in the movie world, director Ava DuVernay will be standing at the podium collecting an Academy Award statuette for "Selma", her powerful, provocative and very moving film. If nothing else, she should be the first African-American woman to at least be nominated for Best Director. Ironically, it was her lead star, and past collaborator, David Oyelowo (pronounced "Oh-yellow-Oh"), who sought her out to direct the film.

Although the events of 1965 occurred 50 years ago this year, "Selma" is so relevant today that black community leaders established a fund enabling  27,000 middle school kids in New York City to see it in a cinema, free of charge. Other major cities in the U.S. are reported to be following the lead of NYC. The parallels to the headlines of today are both eerie and disturbing, as evidenced in one scene where Oyelowo, as King, eulogizes Jimmy Lee Jackson, a black activist who was shot and killed by a white cop in a neighboring town.

The 54 mile Selma-to-Montgomery march was met with strong and violent opposition by segregationist elements. It eventually required three attempts by both black and white marchers to successfully cross the Edmund Pettus Bridge, but nothing was going to stop Dr. King and his disciples from their destiny. Cinematographer Bradford Young skillfully places the viewer in the midst of it all.

Governor George Wallace (Tim Roth) could have put a stop to the on-going violence with a simple voting rights decree on behalf of the black citizens of his state, but he did nothing. Even a contentious meeting with LBJ, portrayed marvelously in the film by Tom Wilkinson, did not spur Wallace to take action. On the contrary, he implored the President to take action himself to quell the uprising, but all Wallace received was a severe tongue-lashing from LBJ, one of the more memorable moments in "Selma".

A film of this magnitude cannot possibly succeed without a dominating performance by its lead star, and Oyelowo is beyond commanding as Dr. King. His turn is certainly Oscar-worthy, and despite an amazingly talented group of potential Best Actor nominees in 2015, he deserves to be one of the elite five contenders.

A number of familiar faces appear in "Selma", including Oprah Winfrey (who also produced), in a relatively small role, as well as Dylan Baker, Martin Sheen, Cuba Gooding Jr. and Giovanni Ribisi. Carmen Ejogo is excellent as  Coretta Scott King, whose quieter moments with her husband reveal lesser known elements of his life.

DuVernay's film covers only the short, but critical, three-month window of the marches and their extensive preparations --- January through March 1965 .The subsequent assassination of Dr. King three years later is only mentioned as part of the closing credits.

"Selma" is a phenomenally stirring production that should be seen by everyone who believes in racial equality. And even more so by anyone who does not.