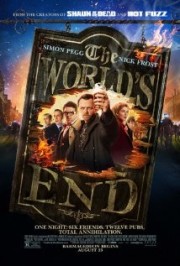 The team of Simon Pegg and Nick Frost, along with director and co-writer Edgar Wright, has become synonymous with great comedy. In their third effort, after "Shaun of the Dead" (2004) and "Hot Fuzz" (2007), now known as the Three Flavours Cornetto trilogy, these guys have once again come up with a delightfully original premise for a laugh-out-loud movie.

Gary King (Pegg) is a 40-year-old wanker, who never amounted to much after high school. His last great claim to fame was a pub crawl, the Golden Mile, on graduation day with four of his best buddies. They never made it to the very last pub, The World's End, and Gary has become obsessed with accomplishing this absurd feat.

He manages to convince the four others, Andy (Frost), Peter (Eddie Marsan), Oliver (Martin Freeman) and Steven (Paddy Considine) to join him on this ludicrous quest in their hometown, Newton Haven, a lovely hamlet about 30 miles outside London. When they arrive on a Friday late afternoon, everything seems normal --- too normal. And when Gary picks a fight with a young ruffian in the men's room, well, let's just say things are no longer normal.

Pegg and Frost have assembled an excellent cast. Each of these actors is accomplished in their own right, but together, they are priceless. Marsan is especially engaging as the bullied little rich boy who still works for his father. When he's inebriated and giggling, he's adorable.

But, of course, this is Pegg and Frost's show, and they shine. Pegg is as goofy as ever, charming and lying his way out of most things, including an encounter with Oliver's sister, Sam (Rosamund Pike), whom he shagged in the loo for the handicapped on the night 20 years prior. Pike adds a breath of fresh air as the only female, and a gorgeous one to boot. It's good to see her comedic side.

Comedies are simply not that easy. And though the ending of "The World's End" is reminiscent of the final scenes of "This is the End" --- no matter. "The World's End" stands on its own, and it is great fun at the movies!

Everyone knows someone like Gary King. He's the ringleader, the go-to guy, the ladies' man --- of a group of five teens who "own" their small town of Newton Haven, outside of London --- at least for a while.

Veteran comic actor Simon Pegg plays King in the outrageously funny third installment of the trilogy following "Shaun of the Dead" and "Hot Fuzz", this one called "The World's End", which Pegg co-wrote with director Edgar Wright. His co-stars include the rotund Nick Frost, his usual cohort in these films, as Andy, along with the always delightful Eddie Marsan (Pete), Martin Freeman, of "Hobbit" fame (Oliver) and Paddy Considine (Steven), rounding out the five as adults some 20 years later.

Gary is introduced to us at an AA meeting. When one of his fellow attendees asks if he laments not following through on his goal of completing a pub crawl consisting of 12 taverns, called the Golden Mile, he decides to reunite the group and try it all over again.

The first part of the film deals with Gary's efforts to convince his mates to disrupt their lives and re-live their beer swilling escapade. Some are married and all have real jobs, so they are reluctant to go along. In Andy's case, he is totally averse to join Gary and the others for a different reason.

Pegg is beyond amusing as he goes to each of his pals, one by one. It's non-stop, rapid fire dialogue and one-liners, befitting Pegg's comedic style perfectly. It's actually, for me, the best part of the film. Without giving anything away, they, of course, return to their little town, and hit the first of the colorfully-named bars, downing the first of many pints, except for Andy, which is explained soon enough.

But their boyhood hometown is not quite what it seems. The people are acting a bit strange, and the truth is revealed later during their tavern tour. This particular truth literally comes out of the blue.

Rosamund Pike is Sam, Oliver's sister (and the object of  both Gary's and Steven's affection), also along for the ride. She provides some welcome, and quite beautiful, relief from all the testosterone flying around.

"The World's End", albeit borrowing somewhat from past movies, is as original as it is funny. It is loaded with special effects and stunts, but most of all, terrific comic performances from the entire cast. Veteran Bill Nighy "appears" as the voice of "The Network", which will mean something once you see the movie.

"The World's End" almost wears out its welcome in the second half, falling just short of staging too many fight scenes. But Pegg and Wright knew when enough was enough, and finish the story on just  the right note.