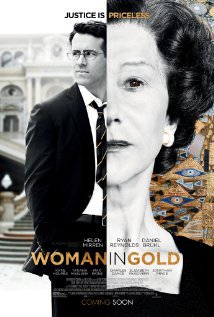 Real-life stories have been running rampant across the silver screen lately. And when they are as thrilling and satisfying as "Woman in Gold", the tale of Maria Altmann, and her quest to retrieve a priceless portrait stolen by the Nazis, I would rather enjoy a bit of real history than most of the made-up stuff.

A widow residing in Pasadena, Altmann, played by Helen Mirren, has just lost her beloved sister, and in her possessions, Maria finds a letter detailing the efforts she had begun to recover five Gustav Klimt paintings which belonged to their family, and are currently hanging in the renowned Belvedere Gallery in Vienna, Austria. She asks her friend, whose son is a lawyer, to call him on her behalf. Randy Schoenberg (Ryan Reynolds) goes to visit Maria, and the two embark on a journey neither could ever imagine.

Mirren is a treasure, whether she's playing the Queen of England or a Jewish immigrant fighting for what is rightfully hers. She is a pistol --- feisty in her portrayals, no matter whom she may be. Hers is a sterling performance, which without, "Woman in Gold" would merely be another Holocaust reminder for people who would prefer to forget.

One of the most startling moments in "Woman in Gold" occurs when Maria and Randy travel to Vienna, a place she never wished to revisit, and she is accosted on the steps of the Belvedere after a particularly contentious arbitration over the painting of her aunt "Portrait of Adele Bloch-Bauer l". A man, obviously perturbed by her desire to regain possession of this magnificent piece of art, angrily queries Maria about why "you people" can't move on and let go of this obsession.

It's still shocking to this day that ignorant individuals blame these victims of such an horrific time in our world's history, and feel justified in doing so. Here is poor Maria attempting to get back something that was STOLEN, and yet others cannot see the justice in her efforts. Mirren does a magnificent job showcasing all of Maria's fears, doubts, tribulations --- and eventually joy.

Perhaps moviegoers will be apprehensive about Reynolds starring as the determined, single-minded Randy, but put aside your fears, because he is more than up to the challenge. Reynolds and Mirren enjoy a quirky, wonderful chemistry --- and their pairing works beautifully. Reynolds is serious enough for this role, but allows Randy's humor and patience with Maria to shine.

Daniel Bruhl also stars as Hubertus Czernin, the Austrian journalist whose aid to Randy and Maria is invaluable. Bruhl is such a quietly effective actor, so perfect to play this vastly critical character. At first, Randy is skeptical of Czernin's motives, but comes to realize their goal would not be attainable without him --- and Bruhl's performance conveys that trustworthiness.

"Woman in Gold", directed by Simon Curtis, who first learned of this real-life drama through a program on BBC, is an incredibly worthwhile movie experience. Not only is the truth unforgettable, heartbreaking and triumphant, but Mirren, Reynolds and Bruhl make it all the more special.

It is well documented that the Nazis confiscated thousands of paintings, sculptures and other artwork as part of their marauding across Europe during World War II. George Clooney's "The Monuments Men" attempted to elicit compassion for the soldiers' mission in that 2014 film, with mixed results.

Now we have a different example of art stolen during that period. The true story "Woman in Gold" is a powerful drama that packs an eloquent and emotional punch, yet has enough of a sense of humor to occasionally lighten the mood. Maria Altmann was a young woman forced to leave her parents and flee her native Austria, along with her husband, as the Nazi persecution of Jews was escalating in the early stages of the war. She is expertly and heartbreakingly played by Canadian actress Tatiana Maslany.

But the movie centers on the older Maria, some 60 years later, in 1998 Los Angeles. The wonderful Helen Mirren renders an Oscar-caliber performance as the determined woman who seeks to get back the beloved painting of her dear aunt, called "Portrait of Adele Bloch-Bauer l". It is one of five Gustav Klimt pieces Maria wants to retrieve. The problem is that this painting has been hanging in Vienna's most prestigious museum, and it is regarded as the "Mona Lisa" of Austria. Clearly the powers-that-be will not part with it easily, if at all.

The elder Maria hires a struggling young attorney, Randy Schoenberg, (Ryan Reynolds) to help her cause. With an infant and wife (Katie Holmes) to support, he is motivated by a potentially handsome reward, as he learns the painting is valued at millions of dollars. Holmes is adequate providing inspiration to her husband just when he needs it the most.

Reynolds is the surprise of the movie. His portrayal of Schoenberg slowly growing into the job, building his self-confidence while cultivating a friendship with Maria, is amazing to behold. We know Reynolds as a capable actor in comedies, but his performance here is a revelation. His courtroom speeches are memorable.

Director Simon Curtis ("My Week With Marilyn") has beautifully realized the intelligent and convincing script by co-writers Alexi Kaye Campbell and the real E. Randol Schoenberg. The film neatly splices in staged footage of the humiliation of Jews at the hands of Nazi soldiers in Vienna. Shop owners are made to paint "Jud", German for Jew, on their storefront windows. Anti-Semitic words and slogans are etched into sidewalks. The prominent yellow Star of David becomes commonplace on Jews' clothing.

The rest of the supporting cast is equally skilled, especially London-bred veteran actor Allan Corduner as the younger Maria's father, Gustav. Daniel Bruhl ("Rush") has a pivotal role as Hubertus Czernin, an Austrian investigative journalist who proves a vital cog on Maria's and Randy's behalf. Charles Dance is his usual villainous self, unsympathetic to their cause, and Elizabeth McGovern ("Downton Abbey") has a brief but welcome appearance as a supportive U.S. judge. McGovern also happens to be the real-life wife of Curtis. And Jonathan Pryce is, well, priceless, as a U.S. Supreme Court justice.

"Woman in Gold" is reminiscent of another recent movie featuring an elderly woman and a younger companion, sharing the common goal of seeking justice for a wrong committed decades earlier --- the superb "Philomena" from 2013. Like that film, the appeal of "Woman in Gold" hinges on the personal story of Maria Altmann to which moviegoers may relate. On the other hand, "The Monuments Men" was emotionally lacking with its broad-based objective of recovering artwork, and returning it to the anonymous rightful owners.

In the capable hands of Mirren and Reynolds, Maria's quest is a truly riveting experience, one that may leave you emotionally drained as the final credits roll.  With its moving score by Martin Phipps and nine-time Oscar nominee Hans Zimmer (he won for "The Lion King", 1994), "Woman in Gold" is a treasure to be savored.