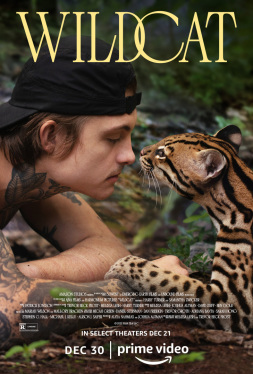 It’s difficult to imagine being alone in the Peruvian Amazon rainforest --- the nearest town being five hours away --- with only an orphaned baby ocelot for company. But in WILDCAT this is what British Army veteran Harry Turner has chosen to do after meeting conservationist Samantha Zwicker, a PhD candidate at the University of Washington.

After surviving the horrific ordeal of fighting in Afghanistan, Turner suffers greatly from PTSD and severe recurrent depression. Following a failed suicide attempt in England after his tour of duty, Turner travels to Peru with thoughts of possibly ending his life. Instead in 2015, he encounters Zwicker who has founded Hoja Nueva (Spanish for “New Leaf”), a nonprofit dedicated to helping and protecting all living things in the rainforest.

Zwicker has the idea of reintroducing an orphaned ocelot to the wild --- something that has never been done before --- and she recruits Turner to act as the baby’s surrogate for a period of 18 months. Determining that it would be best if only one human engaged in this lengthy process so the ocelot would be able to separate eventually and survive in the wild, Turner devotes all his time to feeding, caring for and teaching the ocelot to hunt.

Because Samantha was still working on her post-graduate degree, she occasionally must fly back to the U.S., leaving Turner alone for long stretches of time. Though this was detrimental to his mental health, having to constantly watch over his charge gave him a purpose. It wasn’t always easy due to the jungle and all the dangers associated with living there.

Directors Melissa Lesh and Trevor Beck Frost started the undertaking of WILDCAT in 2018 when they met Zwicker and Turner and became intrigued with their work saving wildlife. But because of the strict protocols established regarding strangers interacting with the animals, Zwicker and Turner had to learn the art of filmmaking so they alone could capture the amazing footage in WILDCAT.

Living on a small wooden platform in the rainforest with limited electricity, no internet and almost completely isolated makes for a compelling story, not only for the reintroduction of the ocelot, but also regarding the strain such an existence would put on any relationship. Initially Zwicker and Turner function as an intimate couple, but eventually the stress of Turner’s undertaking --- and not knowing if his ocelot could survive without him --- caused him to return to self-harm.

Though this aspect of WILDCAT is extremely serious, as any conversation about depression and suicide should be, Lesh and Frost deal with the subject matter deftly. There is clear emphasis on seeking help for Harry, whose restorative journey takes him to other wildlife refuges, including founding his own nonprofit called Emerald Arch.

The overall message of WILDCAT is one of redemption --- and joy. The remarkable footage of Turner and the ocelot navigating the wild is breathtaking --- especially at night. Not only does he need to teach this little guy how and what to eat, but also how to avoid the perilous landscape --- and creatures --- of the rainforest.

At one point, Harry’s parents and little brother come for a visit. At first reluctant, his devoted sibling learns to appreciate the mystery and beauty --- and of course all the fun --- of this remote way of life. After a week of experiencing a plethora of new adventures, he exclaims that this has been the best vacation of his life --- even better than Disney World!

Zwicker, Turner, Lesh and Frost spent four years making WILDCAT. It’s a magnificent tribute to their dedication to conservation and saving as many wild animals as humanly possible.

Imagine living in the Peruvian Amazon rainforest for months at a time with little contact with the outside world but daily contact with monkeys, birds, frogs and all manner of creepy crawly creatures. I personally cannot imagine it --- I get panicky when a spider invades our home. (I make Jeanne kill them.) However, filmmakers Melissa Lesh and Trevor Beck Frost have created a documentary as unique and worthwhile as we will ever likely see.

It’s called WILDCAT and it focuses on two remarkable individuals, Samantha Zwicker and Harry Turner. Zwicker is a wildlife rehabilitation specialist who founded an organization called Hoja Nueva. Part of its mission is saving orphaned animals, in this case preparing an ocelot kitten to fend for himself in the wild.

Turner is a British veteran of the Afghanistan war suffering from severe depression and PTSD. His return from the war triggered thoughts of suicide and a life not worth living. But when he met Samantha, everything looked brighter.

The two fell in love not only with each other but also with their primary subject, a male baby ocelot. Harry would endure 18 months, mostly by himself, working with the ocelot while Samantha traveled back and forth to the U.S. The dedicated filmmakers made an incredible 13 trips to Peru to shoot footage of Harry and Samantha.

But the reality is that Harry and Samantha became filmmakers on their own. “Rules and protocols” prevented strangers, i.e., Melissa and Trevor, from interacting with wild animals so it became incumbent on Harry and Samantha to do their own filming. Together the foursome assembled more than 1000 hours of footage which was honed down to barely more than an hour and a half for WILDCAT. What is left is truly captivating.

Part of this movie deals with the actual ocelots they are trying to save, but equally important are the personal stories of Samantha and Harry. His wartime experience is well-chronicled, and we feel his pain. However, Harry finds salvation by training the ocelot to initially trust him but eventually be turned loose so he can survive in the jungle.

As for Samantha, she had her own issues involving an alcoholic father. But she has turned her life around and completed her doctorate at the University of Washington.

When Harry’s family visits the pair in the Amazon from their native England, it’s a special feature of the film. Harry’s younger brother, who idolizes his older sibling, plays with some of the aforementioned creepy things, loving every minute of it and calling his time there the best vacation of his life.

WILDCAT is an amazing achievement on so many levels. The fact that a young British war veteran suffering from PTSD meets a pretty, young American conservationist and together they discover a mutual love of everything wild is quite a story. WILDCAT is a film that deserves to be seen on the big screen.