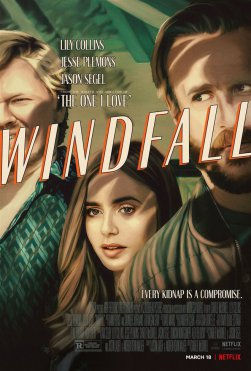 Netflix’s newest offering, WINDFALL, billed as “a Hitchcockian thriller” definitely has a few positives going for it. It is suspenseful, the cast is small but extremely effective, everyone gets what they deserve --- and most importantly --- it doesn’t overstay its welcome at 92 minutes.

Directed by Charlie McDowell, who conceived the story along with Jason Segel, Justin Lader and Andrew Kevin Walker, WINDFALL opens with Segel’s character, a “nobody”, hanging out at the vacation home of an uber-wealthy tech CEO. He picks a few oranges, lounges by the pool, and finally gets around to burglarizing the place.

Just as he’s ready to leave, the CEO (Jesse Plemons) and his wife (Lily Collins) arrive for an unexpected getaway. Trapped, the thief takes the couple hostage. Intending to reap only $100,000 for his efforts, the CEO convinces him to accept $500,000 instead. A call to the CEO’s assistant for the money proves frustrating, as it will take another day for that amount to be secured and delivered.

As the hours slowly tick by, the vile arrogance of the CEO deepens, and a clearer picture of his marriage to his beautiful --- younger --- wife comes to light. An interruption by the gardener (Omar Leyva) only exacerbates the situation, resulting in an unfortunate death. But do not despair, as I already mentioned, everyone --- well, almost everyone --- gets what they deserve.

WINDFALL is an extremely low-key thriller. Segel, Collins and Plemons are excellent and well-cast. It’s great to see Segel again --- and this nobody role is perfect for him. Plemons is incredibly adept at playing a scumbag, who hints that his wife should basically take one for the team.

Colllins shines as the subservient wife --- until it all becomes too much. She’s the one forced down the long driveway at night to retrieve the satchel containing the ransom. As another car approaches in the pitch black, the suspense hangs in the air.

WINDFALL isn’t really as good as a Hitchcock classic, though the story has just enough intrigue to hold your attention. McDowell and his cinematographer, Isiah Donté Lee, could have explored more interesting lighting effects to emphasize the tension/drama, but as it stands, WINDFALL is worth a view.

WINDFALL has a simple premise, a small but well-known cast (Jason Segel, Lily Collins, Jesse Plemons), and one bit of foreshadowing ---- Segel’s character is always retying his shoelaces. I’ll give the story props for originality, including the fact that none of the characters have names.

Segel plays a “nobody” who is caught red handed in the posh abode of a wealthy CEO (Plemons) and his wife (Collins) after looting their office of cash and a Rolex watch. The simplicity of the premise, co-written by Segel, director Charlie McDowell and two others, has the CEO and his wife loosely held captive in their home awaiting a satchel of $500,000 in cash. This is the agreed upon sum to make the nobody go away.

We get the feeling early on that Collins’ character is the CEO’s trophy wife, which is essentially confirmed later. The thief finds a gun in the home which becomes only a mild threat to the safety of the others, but when the  gardener (Omar Leyva) shows up, the plot takes a turn for the worse --- but far more interesting for the viewer.

It's a bit of a stretch that victims being shaken down for what is basically ransom should argue with their kidnapper that his asking price is too low, but when you’re a billionaire CEO what’s a few hundred thousand? Do not use this film as a lesson in effective negotiating.

It's helpful that WINDFALL runs only 92 minutes. This short feature length makes the ending palatable. If WINDFALL was a typical film of two hours or more, the payoff may not have felt warranted. On the other hand, a movie that takes place in a single locale without any costume changes or sweeping vistas must be one that holds your attention. And on that level, it does succeed. Meanwhile, the music by the composing team of Danny Bensi and Saunder Juriaans is effective in helping to establish some tense moments.

McDowell, who is the son of Malcolm McDowell and Mary Steenburgen, also happens to be the husband of Lily Collins in real life.