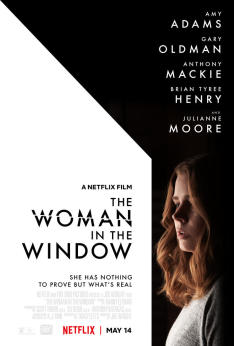 Amy Adams stars as Anna Fox, an agoraphobic child psychologist, in director Joe Wright’s new film based upon the very popular novel by A. J. Finn. THE WOMAN IN THE WINDOW boasts an impressive cast and a screenplay by Tracy Letts, who also appears in the movie as Anna’s psychiatrist.

I so wanted to like this movie --- and had been anxious to see it. Unfortunately, as I have often pointed out, talented actors can only do so much to make a film successful if the writing is lacking --- and boy, is it lacking here!

Anna lives in a rather large brownstone in New York City. She has a tenant living in the basement apartment named David Winter (Wyatt Russell) who does odd jobs for her as he works on becoming a musician. Though she claims to be a child psychologist we never see her interact with any clients. She spends her days watching old movies, popping a myriad of pills, drinking wine and checking up on all her neighbors.

A new family moving in across the street is cause for some excitement in Anna’s dull life, especially after she meets the wife, Jane Russell (Julianne Moore), and they spend a pretty boozy night getting to know one another. Anna has also met Jane’s 15-year-old son, Ethan (Fred Hechinger), who confides to Anna his unhappiness with this latest move.

When Anna believes she’s witnessed Jane’s murder, a la REAR WINDOW --- a classic by Hitchcock no one can duplicate --- she contacts the police. They don’t believe her, especially when the husband, Alistair (Gary Oldman), introduces Anna to his wife, Jane, and it turns out to be Jennifer Jason Leigh instead. Detective Little (Brian Tyree Henry) does take pity on Anna initially, but all the players think Anna is off her meds.

THE WOMAN IN THE WINDOW could have been --- should have been --- so much better. There is literally no tension in this movie. Even the scene in which Moore’s character is supposedly being killed is bland and innocuous. And the big reveal regarding Anna’s estranged husband, Ed (Anthony Mackie), is another big disappointment.

The failure of THE WOMAN IN THE WINDOW falls squarely on both Wright and Letts. Wright is guilty of allowing his actors to go over the top, particularly Adams. This makes two in a row for her where her portrayals are in excess --- the other being HILLBILLY ELEGY. And Letts’ screenplay is lacking in any excitement whatsoever. When Anna creeps downstairs into David’s apartment uninvited, there is absolutely NO suspense --- none --- nada.

The best part of THE WOMAN IN THE WINDOW is Moore, but she’s only in the movie for a few brief minutes. Her alcohol-infused sequence with Adams is the most enjoyable in the film. It’s too bad Adams couldn’t maintain that same energy throughout without overdoing it.  C’est dommage.

Director Joe Wright’s new release THE WOMAN IN THE WINDOW, with a screenplay by Tracy Letts, should not be confused with the 1944 film of the same name starring Edward G. Robinson and Joan Bennett. For one thing, the plots are entirely different, and the movie of 77 years ago was highly acclaimed.

In this 2021 release, Amy Adams stars as Anna Fox, an agoraphobic child psychologist living alone in New York City. When a person is thus afflicted, there is ample time and opportunity to keep track of one’s neighbors through windows which never seem to be covered by drapes or shades in the interest of privacy.

As a result, Anna espies a violent attack on a woman named Jane Russell (Julianne Moore) --- who only hours before had visited Anna in her brownstone. The Russell family, Anna learns, has just moved into the home across the street. Before Jane’s visit, Ethan Russell (Fred Hechinger), the family’s odd-acting 15-year-old son, dropped by to bestow on Anna a scented candle, courtesy of Ethan’s mother. As Anna says, it is she who should be welcoming newcomers to the ‘hood, but then again, she suffers from agoraphobia.

Because of continuing strange events, as when Alistair Russell (Gary Oldman) confronts Anna at her home with a warning to stay away from his under-aged son, Anna begins to take photos with her high-powered camera. If any of this reminds you of Alfred Hitchcock’s masterpiece REAR WINDOW, that is strictly inconsequential because THE WOMAN IN THE WINDOW has neither the style nor the suspense of that film.

I found the first half of the movie sufficiently intriguing, but the wrap-up to Anna’s struggles leaves a lot to be desired. As other aspects of her life are revealed, such as the truth about her husband and daughter, we wonder if she is crazy, delusional or simply overly depressed and suicidal about her condition. Through all this negative, overbearing stuff we do get some comic relief from her feline named Punch --- the epitome of a grumpy cat.

The veteran cast also includes Anthony Mackie and Jennifer Jason Leigh, who along with Oldman and Moore, have minor roles. One standout is Wyatt Russell fresh off his performance as Captain America in the recent miniseries “The Falcon and the Winter Soldier”.

Russell plays David Winter, the basement-dwelling tenant of Anna’s who is undeniably mysterious with an attitude that suggests he might be dangerous. But perhaps the most enigmatic character is the afore-mentioned Ethan. Hechinger’s portrayal is confounding to us and a scene stealer.

Despite the presence of a Letts screenplay which keeps us guessing on several levels --- and an upper-echelon cast --- it’s not enough to recommend this film. Letts is a past Tony and Pulitzer Prize winner, but it has been eight years since his Pulitzer winning play “August: Osage County” was made into a movie and 10 years since another of his well-received dramas, “Killer Joe”, also made it to the big screen. THE WOMAN IN THE WINDOW falls far short of those Tracy Letts achievements.