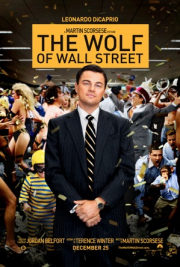 In his fifth collaboration with Martin Scorsese, Leonardo DiCaprio stars as Jordan Belfort, a Long Island stock wizard, whose brokerage firm Stratton Oakmont swindles a multitude of investors in the late 1980's. Based on Belfort's own memoirs, with a screenplay by Terence winter, who writes "Boardwalk Empire", "The Wolf of Wall Street" is a fast-paced, though exceedingly dark comedy about the ruthlessness of the highly competitive stockbroker business.

DiCaprio has never been better. It's his second standout performance this year behind "The Great Gatsby", a film panned by most critics, but in my opinion, a gorgeous effort by Baz Luhrmann. In this role, DiCaprio plays the high-roller wannabe Belfort with a manic verve and exhaustive energy. It's hard to imagine how he, Scorsese and co-star Jonah Hill kept up the pace.

After an early and very short-lived stint at a successful brokerage firm on Wall Street, which goes belly-up after Black Monday in 1987, Belfort starts over in penny stocks. Proving himself to be extremely successful in this endeavor, he and his new-found partner, Donnie Azoff (Hill), set up shop in an old auto repair garage and begin their climb into the big leagues.

To write that Belfort and his initial crew were into excesses at every level would  be an understatement. His own father, Max (Rob Reiner), tries to temper his spending habits with no success. Parties, drugs, prostitutes --- you name it, they were all in the mix, and there was never enough. Even his second marriage to the drop-dead gorgeous Naomi Lapaglia (Margot Robbie) doesn't stem Belfort's nefarious ways.

I have always been a huge fan of DiCaprio. In reality, his performance was the only good thing about "Titanic", a film I loathed. How anyone can enjoy watching a disaster in which 1500 plus humans drown is beyond me, but I digress. "The Wolf of Wall Street" is a gift to DiCaprio --- allowing him to be as outrageous as necessary.

He's especially dynamic when preaching to the choir at the weekly sales meetings at Stratton Oakmont. He's so convinced that what they're doing is "good" that he talks himself right out of a sweet deal with the government. Belfort cannot be stopped, and neither can DiCaprio. He revels in this guy's obsessiveness.

Equally addicted and addictive is Hill, portraying the whiny, paranoid wingman, Azoff. This would be a plum role for anyone but I'm not sure anyone except Hill could have jumped off the screen and made Azoff his own as well as Hill. Both DiCaprio and Hill would be in line for Oscars, were it not for the likes of Ejifor and Leto in front of them.

Matthew McConaughey has a terrific cameo as Belfort's first boss in the stock market world. His lunch scene with DiCaprio, shown in part in the trailers, is worth the price of admission alone, This guy can do no wrong.

Though Scorsese's work with DiCaprio has produced no gold statuettes for Leo, their efforts have been greatly appreciated. DiCaprio seems to be the Paul Newman of his generation --- many times Oscar-nominated but no win until much later in his career. That's okay, though, because I believe he has a Best Actor Oscar coming one day. Until then, it will be one award-worthy performance after another.

'Tis the season for awards considerations, so here's a thought. Leonardo DiCaprio will NOT win the Best Actor Oscar, despite his electric turn in "The Wolf of Wall Street". And he probably will NOT even be nominated. Despite the best male performance of the year, in a very crowded field, Leo will again be overlooked by the Academy voters. Perhaps he makes it look too easy, as he usually does. He should have won for "The Aviator" in 2004 --- hands down. But, to borrow Jeanne's idiom, I digress ---

In this film, Leo's fifth collaboration with director Martin Scorsese, he plays Jordan Belfort, the real-life stock broker who initially made a lot of money selling penny stocks, and after forming his own firm, continued growing his fortune with shady deals, preying on uninformed and gullible investors, until the feds stepped in. Doggedly pursued by government agents like Patrick Denham (Kyle Chandler), Belfort mostly outsmarted and out-finessed them all, building a reputation that made him the idol of young New York stock brokers with dollar signs in their eyes, and visions of Bentleys in their driveways.

This film is essentially an expose of wealthy people behaving badly. Sex, nudity,

drugs and drunkenness --- they all abound in copious doses, and those are just the scenes inside Belfort's expansive Long Island office, full of eager, money-hungry employees. As Gordon Gecko's mantra was "greed is good", Belfort's mantra should have been "greed is the only good".

But consistently bilking investors out of their hard-earned money will eventually catch up with the perpetrators. Faster than you can say "Bernie Madoff", Belfort, his second banana Donnie Azoff and their cronies get their comeuppance. And yet, they are such relatively likeable characters, there is no great feeling of "gotcha" when they are arrested.

Belfort's sit-down confrontation with Denham on his "James Bond" type yacht (Belfort's words, not mine) is priceless. Leo's mastery of the pause, in between the rat-a-tat chatter, is a signature moment, and practically sufficient to garner him an Oscar nomination. But his overall performance consists of an amazingly fierce array of emotions, and must be seen to be believed.

DiCaprio is ably assisted by Jonah Hill as Azoff. Hill is so solid in this role that he may be in line for his second Supporting Actor nod, following "Moneyball" in 2011.

Scorsese has littered this movie with other memorable characters, like Naomi Lapaglia (Margot Robbie, a 23-year-old Australian beauty) who stuns Belfort when she appears at one of his house parties. The married Belfort does a triple take --- actually more of an elongated stare --- when Naomi walks through his door. She becomes a major character in the film, which is incredibly engrossing considering its three-hour running time.

Jean Dujardin, Best Actor winner for "The Artist", plays a French banker who is Belfort's contact for overseas money laundering. Rob Reiner has an hilarious scene as Jordan's father, Max. And Matthew McConaughey has a small, but rousing, part as Mark Hanna, one of the principals at a firm where Belfort starts out early in his career. His lunch scene with a "made-up-to-be-young" Leo is hysterical.

"The Wolf of Wall Street" is based on Jordan Belfort's own book, and Terence Winter wrote the screenplay. Winter is a multiple Emmy winner for his work on "The Sopranos", and he is also a major contributor on TV's "Boardwalk Empire", for which Scorsese is an executive producer.

In an obviously distinguished career, "The Wolf of Wall Street" is one of Scorsese's finest, certainly his best effort since "The Departed" seven years ago. It should be in line for a Best Picture nomination.