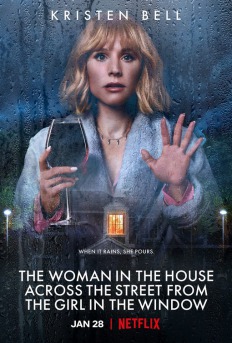 Beginning with the first time Kristen Bell who plays Anna pours her red wine all the way to the tippy top of her rather large wine glass --- I was hooked. Netflix’s eight-episode series THE WOMAN IN THE HOUSE ACROSS THE STREET FROM THE GIRL IN THE WINDOW is a droll, dark comedy/mystery/thriller that keeps you guessing until the very last frame.

Poor Anna, it’s been three years and she just cannot get over the untimely death of her young daughter, Elizabeth (Appy Pratt). Her ex-husband, Douglas (Michael Ealy), has moved on, but about all she can manage on a daily basis is sitting in the window of her lovely home and drinking wine as she watches the world go by.

Her old friends, especially her neighbor, Carol (Brenda Koo), think she should move on --- like snapping out of her depression is simply that easy. They gossip about her drinking behind her back at the grocery store. She has little or no support except from her therapist, but even that doesn’t seem to help. Once a successful painter, she can’t bring herself to pick up a brush.

Things begin to change when a handsome father named Neil (Tom Riley) moves into the house across the street with his darling little girl, Emma (Samsara Leela Yett). Finally, Anna has a reason to get up in the morning. She bakes a chicken casserole for them and when she delivers it, Neil invites her to join them for dinner. It all seems very promising until --- well, you should find out for yourself.

Is THE WOMAN IN THE HOUSE ACROSS THE STREET FROM THE GIRL IN THE WINDOW a bit over the top? Yes, that’s what makes it so very entertaining. But it isn’t just darkly funny, this series has plenty of twists and turns which, at times, are downright frightening. And all of this is made so much better by the ever-present Bell.

She’s absolutely perfect as the sprightly artist who comes back to life when the available hunk takes up residence outside her window. Her escapades are outrageous, especially when she meets bad boy Rex (Benjamin Levy Aguilar) in one of the episodes down the line. Bell makes watching THE WOMAN IN THE HOUSE ACROSS THE STREET FROM THE GIRL IN THE WINDOW infinitely enjoyable --- no one could handle this material better.

The only “problem” with THE WOMAN IN THE HOUSE ACROSS THE STREET FROM THE GIRL IN THE WINDOW is the fact that each episode is under 30 minutes, so the reality of binging it in one sitting is likely. David and I almost pulled that off, but instead saved the last two for a second night. And now that it’s over --- darn --- we’ll have to wait for Season 2 --- hopefully.

This Netflix series with the absurdly long title suggesting others like THE WOMAN IN THE WINDOW is billed as a dark comedy/thriller. There are certainly some funny moments, but let’s be clear --- this evolves quickly into a mystery with star (and executive producer) Kristen Bell in a tour-de-force performance as Anna.

If THE WOMAN IN THE HOUSE ACROSS THE STREET FROM THE GIRL IN THE WINDOW was a book, it would be a page turner. The first episode is mostly fluff, but Bell’s engaging turn makes it mandatory to stick with it to Episode 2, and from that point onward --- Jeanne and I were obsessed. And not just because Anna pours a glass of wine that would last most drinkers a week.

The show touches on a number of issues, including how parents deal with the unfathomable pain of losing a child. We do learn why the tragedy occurred, and while this aspect of the writing may be offensive to some, people often do irresponsible things that they later regret --- not a deal breaker in this case.

If you’ve ever questioned anything you’ve seen with your own eyes, you can identify with Bell’s character. She is amazing as Anna, holding nothing back as the grieving mother and apparent alcoholic who should not be mixing wine with her meds. She shares the series with a superb ensemble cast.

The twists and turns from creators Hugh Davidson, Larry Dorf and Rachel Ramras keep us guessing until the very end. What more can you ask from a mystery thriller?