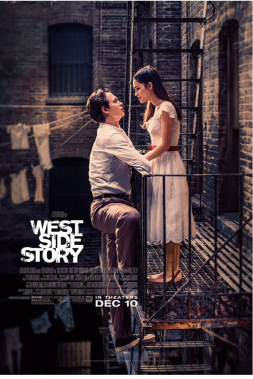 I was seriously holding my breath before the screening of WEST SIDE STORY. Like many others, I wondered why Steven Spielberg would chance a remake, given the original from 1961 was near perfect. Thankfully, I can report that Spielberg’s love for this ageless classic has allowed him to succeed beyond my wildest imagination.

Spielberg has once again teamed with Tony Kushner, a Pulitzer Prize and Tony Award winner, who adapted the screenplay. There are a few minor changes to the story which focuses on gang rivalries and a young couple in love in 1957 New York City. It’s amazing how timely this story remains.

The brilliance of lyricist Stephen Sondheim, who very recently passed away at age 91, and composer Leonard Bernstein is on full display here --- the songs are as beautiful and enjoyable as ever. The original choreography by Jerome Robbins, who also directed the 1961 film, is enhanced by Tony Award winning choreographer Justin Peck. The musical numbers are phenomenal --- and the talented actors and dancers are astonishing.

The Jets, led by Riff (Mike Faist), and the Sharks, whose number one guy, Bernardo (David Alvarez), is a prize fighter, want to set a rumble to settle once and for all who gets to claim the Upper West Side neighborhoods, Lincoln Square and San Juan Hill, as their turf. The Jets represent the Lincoln Square area populated by Caucasians, descendants of those who emigrated to the U.S. mostly from Europe. The Sharks are the Puerto Ricans from San Juan Hill, more recent immigrants to America.

Complicating the “war” between these two factions is the new love between Tony (Ansel Elgort), Riff’s best friend --- and one of the original founders of the Jets --- and Maria (fantastic newcomer Rachel Zegler). A take on “Romeo and Juliet”, these two young lovers are not supposed to be together, as evidenced by Anita (Ariana DeBose) when she tells Maria to forget Tony and “find one of your own kind”.

One of the bigger changes from the original has Kushner replacing the owner of Doc’s Drugstore from Doc to his widow, Valentina, played by the remarkable Rita Moreno. Moreno won an Oscar for her portrayal of Anita in 1961, so her inclusion here was hugely symbolic for Spielberg.

Musicals can be so tricky, especially now. But the genius of the former creators combined with Spielberg’s over-accomplished crew have brought WEST SIDE STORY roaring back to relevance, even without a single rap song.

The one thing Spielberg was adamant about was employing actors  who fit the characters. The young people who play the Sharks are 100% Latinx. And he found two absolute gems in Zegler and DeBose.

Zegler was still in high school when she began auditioning and DeBose didn’t think the role was for her. But each of these young women is amazing. Zegler, in particular, is perfect as Maria --- positively beautiful with a voice to match. And as for DeBose, I can’t imagine stepping into the iconic role made famous by Moreno. That had to be nerve-wracking, but DeBose was embraced by Moreno, which helps.

The guys are a tad disappointing for me. A lot is being said about Elgort’s performance, but since I never liked Richard Beymer as the original Tony, I’d say Elgort is a big improvement --- and at least he and Zegler do their own singing!

However, no one can replace George Chakiris, who played Bernardo in 1961 --- and also won an Oscar. Alvarez simply doesn’t exude the same sex appeal and charisma, which oozed from Chakiris in every scene. And Faist as Riff is no Russ Tamblyn. But, not to worry, this isn’t enough to detract from Spielberg’s grand effort to re-envision this glorious masterpiece for today’s audiences. Like his 1961 predecessor, he may have the next Oscar for Best Picture under his belt.

Some movies should not be remade. Titles like CITIZEN KANE, HIGH NOON, BEN-HUR and E.T. come easily to mind. But what about the original WEST SIDE STORY which won 10 Oscars, including Best Picture, in 1961?

Why would Steven Spielberg risk a potential black mark to his legacy by taking on such a difficult task? It is a challenge he’s wanted to take on and his 2021 version of the much-lauded musical is better than the first one of 60 years ago.

First and foremost, the two leads playing Maria and Tony do their own singing and they are marvelous.  Natalie Wood and Richard Beymer had their singing voices dubbed in 1961. Playing Maria here is Rachel Zegler, a mere 20 years old, but her vocal talents are incredible. I’d love to see her on Broadway playing Fantine in “Les Miserables”.

Equally striking is Ansel Elgort as Tony. He’s a very good actor with a really impressive singing voice. We get to know his version of Tony far better than when Beymer played him long ago. As a result, for those of us who know how the story ends, the emotional reactions are far more powerful. What is missing in the new WEST SIDE STORY is the presence of a major character like Ice (Tucker Smith in 1961) who was so vital to the original. Here he’s almost an afterthought.

Also, for two rival gangs who truly don’t like each other, the original version featured very little actual fighting --- lots of name-calling and general animosity, but not much in the way of physicality. Even the much-ballyhooed rumble of 1961 was relatively tame. Spielberg addresses this issue by staging serious altercations between the Jets and the Sharks from the very beginning.

Ariana DeBose replaces Rita Moreno as Anita, Bernardo’s girlfriend. Moreno does have a substantial role as Valentina, the widow of Doc who owned the drugstore where the Jets hang out. Like Doc, she employs Tony and treats him like a son. DeBose is remarkable in the role --- her dancing is spectacular --- but obviously it’s difficult to replace an Oscar winner who also happens to be an EGOT performer.

Jeanne probably mentioned that she is not particularly fond of David Alvarez as Bernardo, the leader of the Sharks. Nor am I, but replacing the dashing, Oscar-winning George Chakiris from the original cast is next to impossible for any actor. Jeanne also did not care for Mike Faist who plays Riff, the Jets leader. However, I found him as appealing as Russ Tamblyn in that role. Corey Stoll has a meaty role as Lt. Schrank, formerly played by the late, great Simon Oakland.

Finally --- there are the major musical numbers. Jeanne and I, along with our daughter, watched the original WEST SIDE STORY as a family just days before the Spielberg version was screened and the routines are clearly well done. However, under the direction of choreographer Justin Peck and others, the dancing in the Spielberg version is exhilarating.

WEST SIDE STORY (2021) is an instant contender for Best Picture. And the “Officer Krupke” scene performed by the entire Jets ensemble is worth the price of admission all by itself.