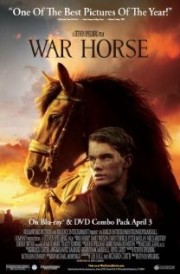 Only Steven Spielberg could transform a brilliant stage play, which employed the use of puppets as horses, into a spectacular silver screen epic. Based on a children's novel by British author Michael Morpurgo, first published in 1982, and later adapted for the stage in 2007, this beautiful story of a boy and his horse transcends all ages.

On the eve of World War I, an alcoholic, crippled farmer, Ted Narracott (Peter Mullan), outbids his nasty landlord, Lyons (David Thewlis), for a handsome colt at auction instead of the workhorse he intended to purchase. His son, Albert (Jeremy Irvine), is thrilled because he has been watching him grow since his birth. He names his  new best friend Joey. Rose (Emily Watson), Ted's wife, is furious because now they have no rent money, and Joey is not the right horse to work the land.

Albert takes it upon himself to teach Joey to plow, which he does just in time to temporarily stave off Lyons. But the field of turnips which Ted envisions as their saving grace is ruined in a rainstorm, so he sells Joey to Captain Nicholls (Tom Hiddleston), a British officer going off to battle in France. Albert is so distraught that he tries in vain to enlist, but he is still too young. Captain Nicholls promises to care for Joey, and to hopefully return him to Albert after the war.

What could have been a horribly sentimental hack job is handled with grace and love by Spielberg. "War Horse" is not always a kind story; there is much hardship and death. But, as is true in most war stories, it provides a classic tale of redemption and reward.

Fourteen different horses were used to portray Joey --- two as foals, four as a colt, and eight as the adult Joey. Spielberg, in his complete attention to detail, had equine artist Ali Bonnister and her crew on board to ensure the continuity of "Joey's" coat color and markings. Representatives of the American Humane Society were present at all times to keep tabs on the animals involved. In fact, the film was awarded an "outstanding" rating for the care that was administered.

"War Horse" is one of those films that begs to be seen on the big screen. There are too many breathtaking scenes to enumerate, but cinematographer Janusz Kaminski brings to life the rural scenes around Devon and the Wiltshire village of Castle Combe as only he and Spielberg can do. One shot of the cavalry, mounted on horseback, marching two-by-two up a very long country road is incredibly stunning, and not digitally produced. Again, only Spielberg has the where-with-all in this day and age to pull off a scene like that.

Along with a brilliant score by frequent collaborator John Williams, this film has assembled the best in the business. Many critics have complained about the final scene, shot on a sound lot in L.A. Although it was not a favorite of mine, and perhaps a little over the top, it does not detract from what I believe to be the best film of 2011.

His View: No one in cinema, at least no other film director, alive or dead, tells a story like Steven Spielberg. That is true of his best films: "Schindler's List", "Saving Private Ryan",  "Jaws", "Munich" and "JurassicPark". When he got wind of a smash London play about the relationship between a boy and his horse during World War I, he felt compelled to make a movie --- lucky for all of us!

Based on a 1982 British children's book, "War Horse" is a stirring, inspiring, epic tale of immense love and friendship, framed within the horrors of war. This is no ordinary story of the bond between a child and his pet. With an awesome original score from five-time Oscar winner John Williams, plus sweeping cinematography from two-time Oscar winner, and Spielberg favorite, Janusz Kaminski, "War Horse" will rightly take its place alongside the other Spielberg classics.

When his intoxicated father, Ted Narracott (Peter Mullan) purchases a young colt at a village auction, 17-year-old Albert (Jeremy Irvine) is thrilled, but his mother, Rose (the superb Emily Watson), is somewhat less enthralled. Ted was supposed to come home with a plow horse so the family could raise enough money through crop sales to keep their farm. But Joey, as named by Albert, is part thoroughbred, thus not made for the rigors of plowing. Albert, though, is determined to convince his mother that the horse will earn its keep, so he spends long hours training Joey, who is much stronger than his frame would suggest.

Spielberg doesn't gloss over the transition of Joey from thoroughbred to field horse, filming an extensive scene of Joey and Albert converting the hard earth, rife with huge rocks, into arable soil. A welcome downpour, as if by divine intervention, helps mightily to complete the process. But the British horizon is darkened by the clouds of

World War I, and Ted sells Joey to the British army after his harvest has failed. Of course, Albert is crushed, and although he is too young to enlist, he later sets off to join his comrades in battle, not knowing Joey's fate. It so happens that millions of horses are sent to the front and die, no match for German machine guns. Can Joey survive against such odds?

There are many memorable sequences in this seamless 2 1/2 hour epic. One example finds Joey at a farmhouse, owned by a kindly grandfather (Niels Arestrup) and his granddaughter Emilie (Celine Buckens), brought there by two young German brothers who have deserted their troop. When the boys are discovered by the German army, the penalty is death, and Spielberg avoids showing the actual execution by hiding it momentarily behind the blades of the farm's windmill, a classic bit of filmmaking. Later, as Joey stands helplessly constrained by barbed wire, soldiers from opposite sides of the battlefield, one a Brit and the other a German, come to his rescue in a moving display of courage and trust.

Spielberg has never been one to shy away from sentimentality. Having seen the play in New York, and now the movie version of the story, I still get chills when I look at the "War Horse" trailer. This is the type of film that Academy voters have cherished in the past. Here's hoping that the majority are not so jaded by sentiment to deny this wonderful movie its just recognition.