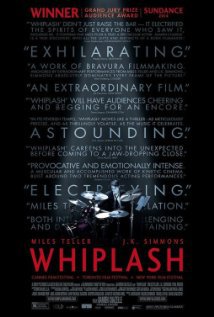 Written and directed by a very young (29), wildly talented Damien Chazelle, "Whiplash" is an electrifying (overused word, but, in this case, most appropriate) portrayal of the human need for greatness, and the terrifying prospect of failure.

Chazelle has chosen wisely by casting Miles Teller as Andrew Neiman, a 19-year-old drummer whose sole focus is jazz. The conductor, Terence Fletcher, of the award-laden jazz ensemble at Andrew's high-ranking music conservatory in New York City, is played by J.K. Simmons. "Whiplash" is about them --- and only them.

There are a couple of minor characters. Paul Reiser gives a fine performance as Andrew's overly supportive father --- a high school teacher, who, in Andrew's eyes, is a failure. Also present is Melissa Benoist as Nicole, a brief romantic dalliance for Andrew. And I mean short-lived, especially after he informs her, stoically, that he must concentrate on his music, and nothing else.

So we're back to Andrew and Fletcher. Andrew is driven, to say the least, and Fletcher is mighty cocky and comfortable as the "driver". The students in his band know the score, literally and figuratively. He's maniacal in his precision and expects no less from anyone else.

Rumor has it that he drove an ex-student to suicide. He rides Andrew in the same way --- bloody hands be damned. Stolen music, car accidents, off-key instruments --- all of this provokes Fletcher to quite near madness, but Simmons never overplays Fletcher's fringe lunacy.

Teller and Simmons are mesmerizing, especially Teller when he's playing his drums. It's a stunning achievement, made even better by the exceptional editing by Tom Cross. There will be much talk about many aspects of this film come Oscar season, and editing had better be on that list.

One could go on and on with accolades for "Whiplash" --- which  is the name of the jazz number practiced and performed in the film --- because it is that good/great! Chazelle, himself, was an award-winning drummer in high school, and had an instructor whom he admired who pushed him to greatness. He wanted to showcase that relationship between student and teacher in "Whiplash", and he has succeeded beautifully.

I'll say this up front about "Whiplash". It may be the best movie of the year. It's still early, but at the very least, it should be on the short list of Best Picture nominees for 2014.

Who knew that a simple story about a young musician, obsessed with being the best drummer of his, or any other generation, could be so spectacularly stunning? All the pre-release accolades are completely accurate. It's a mesmerizing and seductive presentation, with Oscar-caliber performances by its two leads.

Andrew Neiman (Miles Teller) is a 19-year-old Buddy Rich wannabe. He is studying percussion, i.e., drums, at the prestigious (fictional) Shaffer Conservatory of Music in Manhattan. Practicing one day before he ever meets the feared musical conductor of the school, in walks Terence Fletcher (played by J.K. Simmons, like you've never seen him). He is in his 50's, physically fit and heavily muscled in a tight-fitting black tee shirt --- and he wastes not a single word of dialogue.

Fletcher is driven to be the leader of the best band he can produce, one capable of continuing to win the national competition. Along the way, if there are casualties strewn aside --- students who can't cut it in his class --- he couldn't care less. One such pupil is driven to tears as he is reprimanded and ordered to leave.

This is more than tough love. Fletcher is a combination of Captain Bligh and Jack Webb's drill instructor from the movie "The D.I." rolled into one intimidating package. But it is all young Andrew can do to survive the browbeating by this man. Fighting to be promoted from the band's alternate to its core drummer, Andrew practices his craft until his hands are bloodied, and then he keeps going --- and going. But is it good enough to satisfy the maniacal Fletcher?

We saw Teller in films like "The Spectacular Now" and "Divergent", both capable turns. Forget those --- he is magnetic in "Whiplash", and his performance is remarkable. Supporting players are the perfectly cast Paul Reiser as Andrew's father, and Melissa Benoist (from TV's "Glee") as Andrew's romantic interest, Nicole.

"Whiplash" won the Grand Jury Prize for Drama at Sundance this year. Come Academy Award time, you can believe that this film will drum up more than a passing interest.