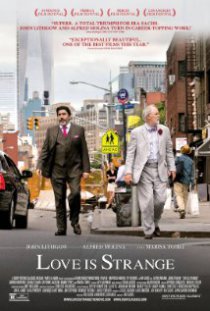 Love is rapturous/torturous, liberating/confining, satisfying/frustrating --- and yes, love is strange. Unfortunately, this is not the title I would have chosen for this film. "Love is Strange" is brilliantly acted, written, directed and photographed, and its moniker is a disservice to the beauty within.

John Lithgow and Alfred Molina portray Ben and George, a gay couple, who, after 39 years together, finally marry in New York City. It's a lovely small ceremony attended by their closest friends and family. And everyone is ecstatic for them --- everyone except George's employers.

George happens to be a teacher at a Catholic school. Of course, it was widely known that Ben and George lived together, but their relationship wasn't truly an issue until they tied the knot, and posted wedding photos on Facebook. Once the local archdiocese got wind of this union, George was history.

Now, with a greatly diminished income, they are forced to sell their co-op and move in, separately, with others, until new living arrangements can be found. George moves in with another younger gay couple, both of whom are NYC cops. And Ben moves in with his "favorite" relative, nephew Elliot (Darren Burrows), his wife Kate (Marisa Tomei) and their teenaged son, Joey (Charlie Tahan), who reside in Brooklyn.

Directed by Ira Sachs, who co-wrote with Mauricio Zacharias, "Love is Strange" is a moving and emotional tribute to George and Ben's love. Never having been separated during their 39 years, we witness their suffering while being apart, and the frustration of living at loose ends.

Lithgow and Molina are exceptional. Each has had a storied career, with so many different roles and opportunities afforded them. They are magnificent at their craft, but watching them play off each other as Ben and George adds another dimension to

their varied past performances.

There are simply too many intimate nuances to enumerate, but a few of their wonderful scenes include dressing for their wedding, a stolen moment in Joey's bunk bed, and, especially, watching Ben and George enjoy an evening out on the town. We know these two love each other, their emotions are real, and raw, and meaningful.

Tahan is the other cast member whose performance is nearly flawless. Joey is a temperamental teenager (are there any other kind?), and Tahan doesn't over blow his tantrums. His conversation with Uncle Ben --- bunk bed to bunk bed --- is a revelation.

Tomei's Kate was a tad snippy for my taste. We all get that it's difficult to have another person in the house. And this is partly Sachs' fault --- having Kate lash out at Elliot about being too kind to Uncle Ben, in front of Uncle Ben, is a bit much. She had plenty of opportunities to do that when poor Uncle Ben wasn't around. A minor complaint, but one, nonetheless.

"Love is Strange" is a richly rewarding film. With gorgeous cinematography by Christos Voudouris and a haunting soundtrack thanks to Frederic Chopin, hopefully it will be remembered come Oscar season.