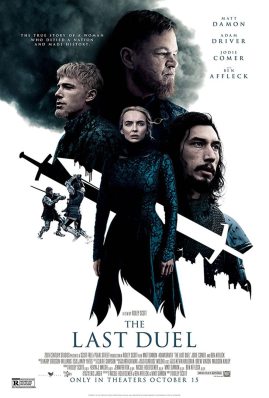 Matt Damon took it upon himself to bring Eric Jager’s intriguing and well-researched book, “The Last Duel; A True Story of Crime, Scandal, and Trial by Combat in Medieval France” to the silver screen. After a search for a screenwriter, Damon chose to pen the script with his friend, Ben Affleck, with whom he wrote their Oscar-winning GOOD WILL HUNTING. Wisely, they selected fellow writer/director Nicole Holofcener to assist with the screenplay, and Ridley Scott to direct this remarkable true story, THE LAST DUEL.

The film begins in France, 1386 C.E. with Jean de Carrouges (Damon) and Jacques Le Gris (Adam Driver) preparing for what will be the last King-approved duel in this country. As the jousting commences, we are taken via flashback to what brought us to this point. Told from three different perspectives, those of Carrouges, Le Gris and finally, the “truth” from Marguerite, THE LAST DUEL is a riveting account of betrayed friendships, greed, lust and ultimately the result of a violent sexual assault.

Carrouges, a valiant knight from Normandy known for his battle prowess, and Le Gris, the son of a Norman squire, are friends. Whereas Carrouges is rough around the edges, Le Gris is well versed in literature, eloquent and charming. His benefactor, Count Pierre d’Alencon (Affleck), prefers him over Carrouges, and thus lavishes Le Gris with titles and land meant for Carrouges, eventually getting Carrouges removed from court.

Because of this bad fortune, Carrouges is broke, so he agrees to marry Marguerite (Jodie Comer), the exquisite --- and smart --- daughter of Sir Robert de Thibouville (Nathaniel Parker), who comes to the marriage with an impressive dowry. A year later, Carrouges and Le Gris meet again at a Christening. They patch things up and Carrouges introduces Le Gris to his stunning wife.

Le Gris is immediately smitten, despite the fact that Marguerite is married to his supposed friend. When Carrouges leaves on another campaign for king and country, Le Gris appears at Carrouges’ estate and brutally rapes Marguerite, whom he claims to love. He warns Marguerite not to tell Carrouges, because he may kill her --- he has that right --- but upon his return, she relays every aspect of the vicious attack to her husband.

Marguerite insists that Le Gris face punishment, but women are considered property of their husband’s and have no standing in court. It is up to Carrouges to demand justice, and getting no satisfaction from the Count, he travels to Paris to present his case to King

Charles VI (Alex Lawther), a giggly teenager intrigued by the prospect of a duel to the death. He grants Carrouges his wish --- and we are brought back to the grim, wintery setting where THE LAST DUEL began.

It’s beyond shocking that we haven’t come all that far since 1386. Women are still treated like chattel and fighting like hell to be heard in a court of law. Rape victims continue to be mistreated and not believed. Somehow, it’s always the woman’s fault, and like Marguerite, they are questioned mercilessly and reviled.

In 1386 in THE LAST DUEL it was stated --- as medical fact --- that a woman couldn’t get pregnant if she didn’t find the act pleasurable (Marguerite is pregnant). Laughable --- maybe --- but it’s an opinion which is probably believed yet today. What Carrouges fails to inform Marguerite is the tiny detail that if God, in His divine wisdom, chooses Le Gris’ truth over hers --- and Carrouges perishes in the duel because she’s lying --- she will be burned at the stake. Nice, huh?

Scott is truly masterful directing films such as this. His resume is profound and varied, but when it comes to period spectacles, no one is better. THE LAST DUEL is cinematic splendor. The battle scenes are handsomely choreographed, especially the last to-the-death sequence.

Every detail, no matter how small, is attended to by his magnificent crew. Cinematographer Dariusz Wolski has worked with Scott on five of his films and his photography here is inventive and breathtaking. On his 13th movie with Scott, production designer Arthur Max has selected some of the most beautiful regions of France. And the amazing costumes, including the full armour and chain mail are complements of designer Janty Yates.

As impressive as all this is, however, it is the undeniably talented cast which creates the real force behind THE LAST DUEL. This is Damon’s best performance in years, despite wisecracks about his hair. He’s well suited for the role of Carrouges --- an uncouth brute who manages to defend his wife, even if it’s for all the wrong reasons.

Driver is his usual cool, detached self, as the arrogant, despicable Le Gris. And Affleck is quite menacing --- and amusing --- with his blond locks. I half expected Affleck and Damon to burst out laughing at some point in time, but after being friends for 40 years, they managed to hold it together.

Yes, the guys are great, but this is Comer’s film. She is damn near perfect as the willful wife who stands her ground and refuses to be a victim. She is simply luminous. Much has been written about her gorgeous complexion since she rose to stardom as Villanelle on “Killing Eve”, and it is all true. But it isn’t just her lovely face that sets Comer apart. She commands every scene she’s in --- domineering with a presence very few can muster. I don’t know how she managed to get through multiple shootings of the assault, because it is horrific --- a true testament to her superb acting abilities.

Though not everyone will be drawn to a period piece set in Medieval times, THE LAST DUEL is an astounding accomplishment. The bleak, gritty, muddy, violent duel itself is worth the price of admission.

If the thought of great friends and pretend rivals Matt Damon and Ben Affleck dressed in Medieval garb sounds amusing, you will get over it quickly in this astonishing film by the soon-to-be 84-year-old director Ridley Scott. Actually, an early scene has Damon’s character bowing down to Affleck’s character and declaring his allegiance to “his lord”. But that brief sequence ends any smirks and giggles from the audience. Showing no signs of directorial indecision, Scott has provided the world with another period piece to rival his Academy Award-winning spectacle GLADIATOR (2000).

THE LAST DUEL is based on actual events from 14th century France. Damon and Affleck, along with celebrated screenwriter Nicole Holofcener, have collaborated on this film which features three different perspectives of the same critical incident upon which the movie is focused. The trio of screenwriters based their contributions on the book by Eric Jager who endured painstaking research over a period of 10 years.

Jean de Carrouges (Damon) is a widely respected knight and war hero who marries Marguerite (Jodie Comer). While Carrouges is away fighting, his close friend at the time, squire Jacques Le Gris (Adam Driver), finds Marguerite irresistible and professes his love for her.

The lady protests, exclaiming she is, after all, a married woman. But Le Gris assaults her sexually --- the term “rape” was seldom used 600 years ago --- and her accusations eventually end up with the teenage king of France (Alex Lawther) declaring a duel to the death between Marguerite’s husband, Carrouges, and his now-hated rival Le Gris.

The final jousting battle between Carrouges and Le Gris is truly a gut-wrenching, white-knuckle affair. In fact, my fists were clenched long after the duel was over. This sequence is as tense as it gets in a movie theater.

The stellar cast lives up to its reputation. Damon and Driver are superb, as is Comer who should give Jessica Chastain (THE EYES OF TAMMY FAYE) a run for her money as Best Actress in 2022. And Affleck as the uber-wealthy land baron who favors Le Gris over Carrouges may be deserving of a Supporting Actor nomination.

Scott has a unique approach to his films. During principal photography he will assume an editing role utilizing four and even six cameras to get the shot he wants. In THE LAST DUEL he reunites with acclaimed cinematographer Dariusz Wolski for the finished product he desires. This film represents the fifth time these two men have collaborated on a movie. Another frequent partner of Scott is musical director Harry  Gregson-Williams whose score is vital to the action.

To be sure, THE LAST DUEL is violent and not for the weak of heart. On the other hand, the 1300’s were fraught with war and mayhem, so no need to be surprised. And it should be noted that the status of women was nowhere compared to where it lies today, so when a wife charges sexual assault in the 14th century it is a true act of bravery. Indeed, if Carrouges loses the duel with Le Gris, Marguerite is subject to being burned alive at the stake. Comer’s performance is defiant, confident and breathtaking.