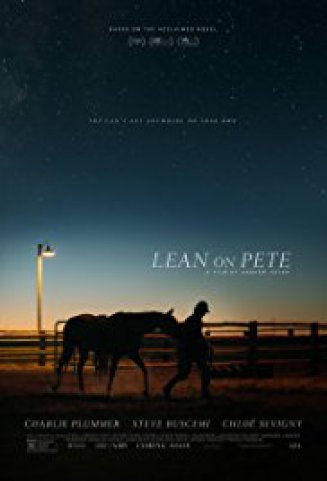 Director Andrew Haigh has taken the poignant novel "Lean On Pete" by Willy Vlautin, about a 15-year-old boy and the horse he befriends, and written a timeless screenplay emphasizing the  importance of hope, friendship and love. Together with his director of photography, Magnus Nordenhof Jønck, they have brought the exquisite beauty of the Pacific Northwest and the plains of Wyoming to peak perfection on the big screen.

Charley Thompson (Charlie Plummer) and his dad, Ray (Travis Fimmel), have recently moved to Portland, Oregon in yet another attempt for Ray to start over. Charley, who is alone most days and nights, finds solace in a summer job working at a racetrack for Del Montgomery (Steve Buscemi), a washed-up horse trainer. He's assigned the task of caring for Lean On Pete --- or just Pete --- a Quarter Horse who is nearing the very end of his racing days.

Finding companionship with Del, with Del's jockey, Bonnie (Chloë Sevigny) and especially Pete, Charley's life seems to be on a better course. But Ray's unfortunate errors in judgment, combined with Pete being sold for slaughter, force Charley to flee with Pete in tow. In search of a home and stability, Charley and Pete make their way to Wyoming, to possibly find his Aunt Margy (Alison Elliott), the most loving person ever in Charley's life.

About this time last year, there was another small, simply marvelous film out entitled "Maudie" with Sally Hawkins and Ethan Hawke. It, too, was a character, dialogue-driven work of art with breathtaking cinematography. Not enough people saw it, though David and I didn't shut up about it. So those of our followers who did view "Maudie" were treated to an exceptional film --- and "Lean On Pete" is another of those little-known special movies.

I am specifically drawn to anything about horses. And though "Lean On Pete" doesn't sound very uplifting, it is, in fact, just that. Charley is one resilient teenager who will not be denied the love he so desperately seeks. And that is definitively what "Lean On Pete" is all about --- LOVE!

The admiration --- and love --- between Charley and his beautiful four-legged friend is quite palpable and real. He will do whatever he has to do to protect Pete, including pilfering gas, stealing food and walking across the open desert. It's a true testament to the power of this friendship --- and what it means to have someone to care for.

Haigh looked at countless teenaged boys to play Charley, but the one standout was Plummer. Oddly enough, as a young boy, Plummer had a recurring role on Buscemi's big series "Boardwalk Empire", so they were already comfortable working together. And Plummer was recently seen as John Paul Getty III in "All the Money in the World". He's a striking young man with a soulful face and expressive eyes. His performance is heartbreakingly believable --- it brings me to tears now as I write about it.

Plummer is in every scene in the film and his presence is always notable. It's not easy carrying on a one-sided dialogue, as Charley does with Pete as they make their journey towards a hopefully happier existence. His running monologue about his past trials with his dad and small joys shared with his aunt ring remarkably true, especially when he recounts a happy episode at a friend's home in the last town where he lived. It's so achingly sad --- and yet, Charley remains so full of hope.

Buscemi and Sevigny are well cast --- and always terrific in these character parts. When Del admonishes Charley for his table manners, it's classic Buscemi. Steve Zahn has a small, pivotal role as Silver, a drifter who, along with his girlfriend, takes Charley in, then steals his money. Perfect role for Zahn.

Jønck's mastery of photography adds another dimension to "Lean On Pete". A full moon hanging in the early evening sky as a backdrop for a lonely boy and his silent horse is as magical as the expanse of desert facing the two runaways is frightening. Like "Maudie" --- and other lesser-known films we champion --- "Lean On Pete" is not to be missed.

We know 16-year-old Charley Thompson is a good kid as soon as he leaves the humble house where he and his dad live in Portland, Oregon. Starting his morning jog, he stoops down to pick up a piece of cardboard that has "escaped" from the recycle bin. I would submit that most boys his age would never have even noticed that piece of cardboard. Thus begins "Lean On Pete".

Charley (Charlie Plummer) goes to work for a crusty horse trainer named Del (Steve Buscemi). Offering Charley $25 a day, Del ends up paying him fifty. His dad, Ray (Travis Fimmel), can't work for at least the time being --- a result of a mistake he made by sleeping with a married woman.

Del trains race horses, including Quarter Horses, the kind that compete in short dashes. If a horse doesn't earn its keep, it is destined for the proverbial glue factory. Charley soon becomes enamored with a horse named Lean On Pete who initially, at least, wins a race or two.

Despite warnings from Bonnie (Chloë Sevigny), Del's partner and a rare female jockey, not to get attached to Pete ("he's just a horse, not a pet"), her words go unheeded by Charley. When Del threatens to send Lean On Pete away, Charley takes matters into his own hands, and an odyssey ensues.

Writer/director Andrew Haigh knows that Plummer is a rising star, and focuses his camera accordingly. In fact, the 18-year-old from Poughkeepsie, New York, never out of a scene, renders a shockingly good performance, one that moviegoers will look back on as his true breakthrough role.

Plummer is coming off a good turn in "All the Money in the World" from late last year, opposite Christopher Plummer (no relation), playing John Paul Getty III, who was kidnapped in 1973 at the age of sixteen. It was a decent enough portrayal, but the role was relatively small. He also played Buscemi's nephew on TV's "Boardwalk Empire" for three seasons, another minor part.

That all changes now. Many big-name actors can point to a singular role that elevated their career to a new level, and catapulted them to true star status. Such is the case with Plummer's performance in "Lean On Pete".

He may eventually join the ranks of a Tom Cruise, a Denzel Washington, or a Tom Hanks. Yes, that is a bold statement, but I recall similar projections for a young Leonardo DiCaprio after "What's Eating Gilbert Grape" in 1999. Sooner or later, moviegoers will buy a ticket for a film just because it stars Charlie Plummer.

Buscemi is perfectly cast as the unsentimental, straight-talking Del Montgomery. Because he offers Charley a job, and recognizes the kid's good work ethic, we tolerate him. Bonnie takes Charley under her wing, to an extent. She's also not thrilled about her association with Del, but at least he gives her an opportunity to race for prize money. This is a role tailor-made for Sevigny.

"Lean On Pete" can be heartbreaking, at times, as the most important things in Charley's young life are taken away. But he is a model of persistence and street smarts. In Plummer's capable hands, Charley is never melodramatic or phony. It's an exceptional portrayal in a very good film.