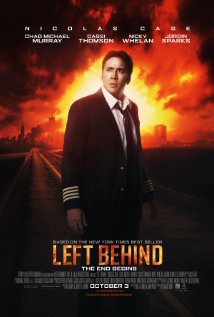 Liam Neeson has a new, formidable competitor for "the actor who will take any role for a paycheck." With his latest effort, "Left Behind", Nicolas Cage has secured a top spot for himself in that category.

Sporting a pasty face and a helmet-head hairstyle/color (really, his hair couldn't be any darker --- it's almost as bad as Gene Simmons'), Cage plays Ray Steele, an airline pilot with a "wacko" wife (their words, not mine) Irene (Lea Thompson). She has become obsessed with religion, the Bible, and the prediction of the Rapture.

So poor Ray sets himself up to pilot a flight to London on his birthday with gorgeous Hattie Durham (Aussie actress Nicky Whelan), as one of the flight attendants. They haven't consummated their friendship yet, but Hattie's anxious to get the party started.

Which brings up problem number one --- of way too many to enumerate --- with "Left Behind". There is no way that Hattie would be remotely interested in Ray --- ewwww! She's young and hot --- he's old and creepy. You immediately know that the script was written by men --- Paul Lalonde and John Patus --- and directed by a man, Vic Armstrong. Because no woman would ever have cast Whelan opposite Cage. But, I digress ---

"Left Behind" is based on the wildly successful book series by Jerry B. Jenkins and Tim LaHaye. It spent multiple years at the top of the New York Times best-seller list, and is also the most popular Christian fiction series ever. With all of that going for it, it's truly a sin that Lalonde and Patus constructed such a dismal, inane and laughable screenplay.

The other two main characters in "Left Behind" are Chloe Steele, Ray's college-age daughter, played by Australian newbie Cassi Thompson, and Buck Williams, an investigative journalist played by Chad Michael Murray. These two meet accidentally prior to the take-off of Ray's doomed flight to London, while Chloe is waiting to surprise her father.

Of course, the guy who has been all over the world following major news stories, Buck, immediately falls for the co-ed, Chloe, in the blink of an eye. Seriously, who writes this stuff? Anyway, their budding relationship becomes a significant part of the storyline --- such as it is --- when later in the movie Chloe is distraught, and Buck and Ray need her to help land the plane.

If all of this sounds absurd --- trust me, it is. As audience members, we are asked to believe that this young woman can ride a motorcycle at break-neck speeds, sans helmet, move road construction equipment, then rig it to move by itself, and signal a huge airliner in the sky by blinking her headlights (which doesn't work, of course, so she has to set a major bonfire).

None of this would be half as bad if the acting, all around, wasn't so atrocious. The only decent cast member is Whelan who manages to come off rather convincingly as the scorned, angry, terrified flight attendant who must conquer her own feelings to help the frightened and confused passengers. But the rest of the cast is truly awful.

Cage's performance registers as nothing more than going through the motions. He doesn't seem to care about anyone or anything. When the airplane wing catches fire, his reaction is underwhelming --- like it happens every day over the Atlantic. Murray and Thompson are definitely no better, reciting their lines like middle school thespians.

And the final scene of Ray, Chloe and Buck gazing at the burning New York City landscape is pathetic, with Chloe enlightening her two companions that this is only the beginning of the end. Geez --- it just can't be any cornier than this!

There's an old saying that goes "I went to a fight last night, and a hockey game broke out". Well, I went to a screening of a sci-fi thriller recently, and a comedy broke out.

Just about everybody associated with the new Nicolas Cage film "Left Behind" --- billed as an apocalyptic "Action-Thriller" --- should be thoroughly embarrassed. With precious few exceptions, the abhorrent acting in this movie is exceeded only by the amateurish writing. The script is based on a series of books about the Biblical "Rapture" that sold over 65 million copies, but I have a feeling the movie doesn't stand up to the books, despite what the authors say (more on that later).

Jeanne and I frequently will identify a particularly bad movie as a candidate for worst film of the year. In the case of "Left Behind", it has already locked up that ignominious title. Hard to imagine anything quite this ridiculous coming down the pike for the rest of 2014.

The movie is astoundingly awful on so many levels. I suspect that Bible thumpers and end-of-the-world fanatics will be "en-raptured" by its doom-and-gloom message, but for the rest of the movie-going public, it is an unintentionally laughable experience.

First, for the uninformed out there, the "Rapture" is predicted to occur at some point in man's history, an event where God will pluck the believers and innocents, i.e. children, from where they stand (or sit), and immediately transport them to heaven. The remaining people are considered non-believers. They will be left on Earth to deal with whatever God has in store for them.

In "Left Behind", those "lucky" ones chosen by God literally leave their clothes and belongings behind, in a heap. This happens instantaneously on the flight to London, and in one scene on the ground, a looter is seen taking the wallet from someone's pants. The events on the plane are just a microcosm of the Rapture, described as a world-wide event affecting millions.

Examples of ineptitude abound from this insulting movie. Here are a few choice tidbits, which contain spoilers, so you've been alerted. The line that drew the biggest laugh, at least from those of us in critics' row, is delivered by Steele's daughter, Chloe (Cassi Thomson). She is on the ground trying to clear runway space so daddy can safely land the damaged and out-of-fuel aircraft.

Steele and his impromptu co-pilot, Cameron "Buck" Williams (Chad Michael Murray), who is actually a famous investigative reporter, are concerned because they can't spot the makeshift runway. Chloe, in a pickup truck, flashes her lights and asks if they can now see the clearing. Totally ludicrous.

Earlier, Chloe averts suicide atop a bridge because Buck manages to call her cell phone just in time --- from the hurtling plane, no less. She jumps on a motorcycle and instantly knows how to ride it. Same goes for a piece of heavy machinery she needs to move. Wow, this girl learns fast.

When Steele ultimately manages to land the plane safely, there is still the matter of stopping it. Naturally, the nose of the plane stops inches away from oil tankers  blocking his path. Like everything else in this film, it's a cheesy effect that holds no suspense. The most egregious cliche of all occurs whenever it looks like they will all die, Steele pulls out a photo of him with his family, and looks at it longingly. This happens at least three times.

As for other actors, Buck is very calm in the co-pilot's seat (the original co-pilot was also taken). He is so unshaken, in fact, he comes across like a deadpan blackjack dealer in Las Vegas rather than someone facing imminent death. Everybody except Nicky Whelan, who plays sexy flight attendant Hattie Durham, is guilty of wooden acting.

The worst is a young mother (played by Jordin Sparks) whose daughter vanishes, and now mom is wielding a gun left behind by the air marshal. At one point she aims the pistol at herself --- go ahead, shoot yourself you annoying person, we do not care!

Little person actor Martin Klebba is Melvin Weir, a truly vexing passenger with an attitude. His performance --- blame it on the lines he is given --- is a reprehensible affront to every little person who sees this film.

"Left Behind" is a cliche-ridden remake of a 2001 picture of the same name. The three main writers behind this 2014 version also had a hand in that one. To give discredit where discredit is due, they are Tim LaHaye and Jerry B. Jenkins, the original authors, and Paul Lalonde, who formed Stoney Lake Entertainment so he could foist on the world "big budget, faith-based films".

The following comments on their new film are attributed to two of the writers, who may or may not be delusional:

“It is the best movie I have ever seen on the rapture.” (Tim LeHaye).

“It’s also a (sic) historical account in a sense, because it's based on a true story, it just hasn't happened yet." (Paul Lalonde)