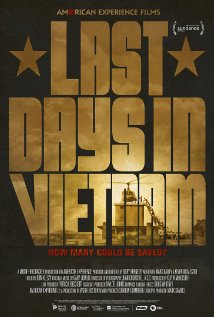 truly --- documentary about the extraction of the last Americans in Vietnam, and the incredibly heroic efforts of a few who defied the U.S. government's orders by helping thousands of South Vietnamese also escape. Another dark piece of this country's history is brought to light, reminding us of the seemingly unending tragedies of war.

Having lived through the brutality of the Vietnam War, and the subsequent fall-out regarding the treatment of our military service personnel, I feel we can never have enough reminders of the mistakes that were made. In Ms. Kennedy's outstanding doc, we witness interviews with Henry Kissinger, now 91, who was then Secretary of State, Frank Snepp, a senior CIA analyst in Saigon and Stuart Harrington, an Army captain, to name a few.

Our ambassador to Vietnam at that time, Graham Martin, who lost a stepson in the war, was stoically denying the imminent arrival of the North Vietnamese army into Saigon. Unwisely, and with dire consequences at hand, he refused to evacuate all of the Americans and South Vietnamese citizens who aided us during the conflict.

Instead of utilizing Tan Son Nhut Airport to expedite the evacuation using commercial airlines, Martin waited entirely too long, and once the airport was under fire, the only option remaining, on April 29, 1975, were the 75 Marine helicopters.

"Last Days in Vietnam" was written by Ms. Kennedy's husband Mark Bailey and Kevin McAlester, and, as I have said multiple times, it's all about the writing, though in a documentary, the truth in the writing should be the main focus. And Ms. Kennedy and her staff have managed to retell this chilling story with explicit details and corroborations.

This film is completely riveting, with footage never before seen, involving rescues aboard the U.S.S. Kirk. Paul Jacobs, the ship's captain, and his crew took on 30,000 refugees with no medical supplies. Their valiant efforts are well-documented and amazing.

"Last Days in Vietnam" isn't just about the horrific mistakes that were made by the U.S. government, costing many South Vietnamese their lives, or interment in "re-education" camps. It ultimately unveils the untold acts of heroism performed by a select few to save many. It's a true testament to the human spirit.

Like all effective documentaries, "Last Days in Vietnam" contains fascinating footage chronicling real events. In April 1975, when the North Vietnamese army was within reach of the U.S. military and South Vietnamese allies, American soldiers are depicted in heroic efforts to save as many of their Vietnamese friends and counterparts as possible. The South Vietnamese were facing certain imprisonment, and in many cases, execution by the Communist North.

Director Rory Kennedy has structured a compelling history of the painstaking evacuation which required the loading of army helicopters that could transport only 40 civilians at a time. The agonizing round trips to a waiting U.S. aircraft carrier each took over an hour to complete, and lasted over 18 hours..

Complicating matters were the stubborn refusals of American diplomats stationed in Vietnam to act sooner, plus directives from the Gerald Ford-led White House to evacuate only American citizens. Secretary of State Henry Kissinger, Ford's key adviser, is interviewed, along with military personnel who took part in the evacuation efforts.

One Army captain, Stuatt Harrington, in particular describes how he remained haunted because he abandoned the last group of some 420 Vietnamese, cringing on the U.S. Embassy roof top, waiting for the helicopter to save them that would never come. Years later at this year's Sundance Film Festival, he would meet one of the rooftop people, a man who managed to escape to America, who expressed publicly his forgiveness to the man who broke his promise.

"Last Days in Vietnam" is a classic example of decision makers in a remote situation who control the fate of helpless individuals thousands of miles away. And most importantly, the film showcases the will and the commitment of brave individuals to do the right thing, defying executive orders even in the face of potentially treasonous consequences.