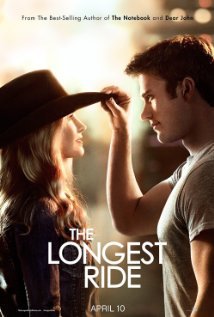 By my count, "The Longest Ride" marks the 10th film that is based on a Nicholas Sparks novel. It will likely please his fans as much as any other movie since the first offering in 1999, "Message in a Bottle".

Aside from a nicely staged relationship told in flashback, "The Longest Ride" is standard, predictable romantic fare. Other than its Hollywood roots --- the connections to celebrities past and present in this film probably set a record --- there is not much to elevate it beyond its mediocrity.

Luke Collins (Scott Eastwood, son of Clint) is a rodeo bull rider in North Carolina, and a handsome hunk. At one of his events, he comes face to face with Sophia Danko (Britt Robertson, a distant cousin of Elvis), a lovely college senior at Wake Forest who has just accepted a position in her field in New York City. Cue the alarm --- they get involved, but she's leaving, and there aren't a lot of rodeos in the Big Apple.

As they drive home from their first date, Luke spots a burning car off the side of the road. He manages to open the driver's door just in time to save Ira Levinson (Alan Alda, in a good performance). Meanwhile, Sophia grabs a small basket from the car just before it explodes, a basket containing love letters Ira wrote to his late, beloved wife, Ruth.

As Sophia reads the letters to Ira by his hospital bedside, the film flashes back to a young Ira (Jack Huston, son of director John Huston, grandson to Walter) and his early flirtation with a young Ruth (Oona Chaplin, yep, Charlie was her grandfather). The movie excels when Huston and Chaplin are on screen together. Their portrayal of the young couple who fall madly in love, and eventually marry, is endearing and authentic. "Boardwalk Empire" fans will recognize Huston as Richard, the defaced character who wore half a mask.

As for Eastwood and Robertson, their affair is oh so unoriginal, and utterly predictable. Yes, they make a handsome couple, but there are no sparks --- no pun intended. Theirs is a rather dull affair, one that doesn't compel the viewer to hope they can work things out. It is much more traumatic, a true emotional upheaval, when the younger Ruth threatens to leave Ira.

Of course, what's a review of ours without complaining about the length? "The Longest Ride" is too long at two hours plus. Even though the actual bull riding at a rodeo lasts, at most, eight seconds, the frequent rodeo scenes of Luke vying for a trip to Las Vegas for the world competition are interminable. His climactic ride aboard the indomitable bull Rango, with over 100 consecutive buck-offs, is shot in slow-mo, so the eight seconds is drawn out to several minutes.

"The Longest Ride" is almost saved by Jack Huston and Oona Chaplin...but not quite.