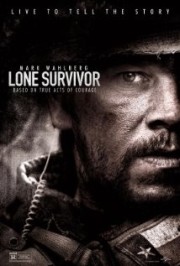 If "Lone Survivor" wasn't based on real events, it would be almost impossible to believe. We all know that Navy SEALs are extraordinary human beings, but Marcus Luttrell's harrowing account of survival is truly riveting.

The mission, "Operation Red Wings", took place on June 28th, 2005. Almost immediately things begin to go wrong. The four men become stranded in the mountains of Afghanistan, surrounded by a large militia of the Taliban. It's a dire situation, to be sure, and help from the rest of their team isn't coming anytime soon.

Written and directed by Peter Berg, "Lone Survivor" is a masterful re-creation of that failed mission. Though the story is at once heartbreaking and inspiring, the acting by the four main characters is a little heavy-handed.

I don't want to actually state that each of them overacted, but some of the performances come close. I admire and enjoy watching Wahlberg work, but casting him as Luttrell may have been a bit of a stretch. Wahlberg is 42. Luttrell was 30 when "Operation Red Wings" took place, and the other three actors are all a lot younger --- I'm just sayin'.

"Lone Survivor" is a pretty good war movie based on an incredible and moving account of courage and survival. It won't be the best film of 2014, but it's definitely worth seeing.

"Lone Survivor" is a thrilling, nerve-wracking war story. Based on real events in Afghanistan in 2005 that placed four Navy SEAL team members in mortal danger, it stars Mark Wahlberg as the real-life Marcus Luttrell, who co-wrote the book by the same name.

Luttrell, along with Michael Murphy (Taylor Kitsch), Danny Dietz (Emile Hirsch) and Matt Axelson (Ben Foster), are sent on a mission by their post commander Erik Kristensen (Eric Bana), to capture and kill Taliban leader Ahmad Shahd. After a prolonged build-up at the film's beginning, with the SEALs preparing for a potentially deadly confrontation, they are finally dropped from a chopper into the Afghan wilds, and make their way to a secretive viewing location overlooking a camp crawling with Taliban fighters.

We learn from Axelson, at this point, that Shahd had recently killed 20 American marines, so we know this mission is not a walk in the park. Amid scruffy beards and pounds of gear, the foursome speak in hushed tones as they discuss their strategy. But suddenly unexpected trouble appears in the form of unarmed Afghani goat herders who represent a threat to the soldiers' lookout point.

This presents a gut-wrenching moral dilemma --- let them go, tether them to trees to be eaten by wolves, or kill them outright? Wahlberg's character takes the high road: "The rules of engagement say we cannot touch them". The tension soars from this moment on, and Wahlberg, in particular, again cements his growing reputation as a solid actor.

The failed mission known as "Operation Red Wings" happened just as depicted in the film, based on interviews with Luttrell and others. Director Peter Berg noted that everybody involved felt a deep commitment to appropriately honor the memories of the fallen soldiers, especially poignant in the words of their surviving parents.

"Lone Survivor" is not an easy film to watch, but war is not pretty. For battle-worn returnees of the struggles in Afghanistan, I suspect this film will trigger deep-seated memories of the military brotherhood they experienced, and the unspeakable losses they endured.