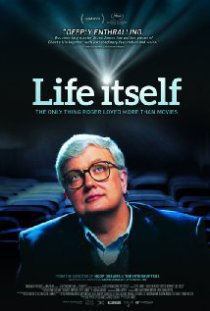 Roger Ebert is about as iconic as they come. When one interviewee in Steve James' new biopic documentary "Life Itself" about Ebert says "F#%k Pauline Kael", you realize just how influential Roger had become.

There isn't any more that I could possibly say about Ebert's multiple accomplishments --- James has done a masterful job of detailing those. But what else is shown in this dramatic piece is the courageous and determined battle that Roger waged against his cancer.

We are privy to time spent in his hospital room and physical therapy sessions. None of this is easy to watch, but it makes it all the more striking to know that this is what Roger had to endure.

Ebert was a complicated guy, and brilliant to boot. An alcoholic at a relatively young age, he was known for holding court at various saloons around Chicago which catered to the elitist journalism crowd. His storytelling expertise was universally acknowledged --- and also his horrid taste in women.

That is, until he met and married Chaz --- at the age of 50 in 1992 (the same year David and I made the same mistake, er, I mean commitment). All of their friends and family testified to the wonderful influence Chaz had over guiding Roger to becoming a more compassionate human being. Chaz is literally one of the nicest, kindest people you could ever hope to meet. But I digress ---

James is, simply put, a superb documentarian. His previous films, "Hoop  Dreams", "Stevie" and "The Interrupters" have all enjoyed critical and commercial success. They have won many awards, including the Chicago Film Critics Association's nods for Best Documentary, and even Best Picture for "Hoop Dreams".

His editing, along with others such as David E. Simpson on "Life Itself", is one of the characteristics of his films which sets him apart. He allows his audience to view Ebert, warts and all, but never lingers too long on one narrative or the

Roger Ebert had a remarkable life. He states that fact in "Life Itself". His incredible body of work --- and it is vast --- will live on through his website for years to come, thanks to the heroic efforts of Chaz and their staff.  James has done a great service with this doc --- it demands to be seen, and Roger's life to be appreciated.

Director Steve James undertook the daunting task of making a film about the most influential movie critic of all time only after reading Roger Ebert's own book, "Life Itself: A Memoir". He was convinced it would make a good documentary. The director of "Hoop Dreams" and "The Interrupters" was indeed correct on that score. His film "Life Itself" is an instant contender for an Academy Award.

Roger, along with Gene Siskel, formed the driving source of film criticism that many, if not most, moviegoers consulted before laying out hard cash at the cinema. There was no Rotten Tomatoes, no blogs, only their newspaper columns and their long-running TV show. Frequent appearances on "The Tonight Show" with Johnny Carson solidified their popularity.

Siskel passed away in 1999 at age 53, a victim of brain cancer, a condition he kept secret from most people, including his own children, as his widow Marlene reveals in the film. Ebert, meanwhile, died of cancer in 2013 at age 70, but conversely allowed the world to see his travails with the disease, even appearing on the cover of Esquire despite his altered appearance from multiple surgeries.

Chaz Ebert says that Roger deeply regretted the fact that Gene did not share his impending death with him, thus being deprived of the opportunity to say goodbye to his "brother". There is so much to learn about the complex life of Roger Ebert that this film is an absolute must for any fan of the movies.

Roger was more than "just" a movie critic. When four young black girls perished in the bombing of a Birmingham church in 1963, Roger condemned it in his column. After JFK was assassinated later that year, Roger's college newspaper ran a story with Kennedy's picture that, unfortunately, was juxtaposed to a depiction of a musket in an ad that appeared to be aimed at the President's head. Roger was horrified, and ordered that the presses stop rolling. He would not allow those editions to be distributed.

It is well known that Roger was a champion of independent filmmakers, and his opinions opened many doors for smaller movies to be made and appreciated. What is not well known is that he and Siskel resurrected the floundering career of one Martin Scorsese --- as we are told by the director himself, Roger's long-time friend.

Being a friend, though, did not stop Ebert from being critical of a work if he didn't like it. Despite his opinion that Scorsese is one of the greatest directors of all time, he still panned "The Color of Money".

On one of those Carson appearances, Ebert called "Three Amigos" one of the worst films of that year, even though Chevy Chase, one of its stars, was sitting beside him. That moment also features the funniest scene in "Life Itself" as Chase goes into his trademark "silent mockery" of Roger while he spoke.

These are just a few examples of the thorough and methodical research that James has compiled in his documentary. Some scenes are not pleasant to watch, as when Roger requires a suctioning procedure. There are a few times where we witness Roger's often excruciating rehab efforts, perhaps one or two of which could have been pared back.

But maybe the most profound concept to come out of "Life Itself" is the grace and dignity with which Roger and Chaz handled his death. Having signed a DNR (Do Not Resuscitate) order without Chaz' knowledge, Roger knew she would never approve. But when it was apparent the end was near, she felt a calmness wash over her and knew it was time to let go.