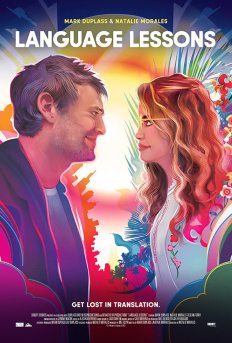 As much as I enjoy blockbuster films like SHANG-CHI and the LEGEND of the TEN RINGS --- which I loved --- it’s smaller ones like LANGUAGE LESSONS which can engage the audience with brilliant writing, no special effects necessary. The other kicker is that LANGUAGE LESSONS is strictly about platonic love, which is so completely unique and refreshing.

Mark Duplass and Natalie Morales, who also directs, wrote this screenplay together during the pandemic. And though they are the only two actors in LANGUAGE LESSONS, and all the action takes place via video chat online, this is not a story about Covid-19 or the lockdown.

Instead, LANGUAGE LESSONS begins with Adam (Duplass) being given 100 weekly Spanish lessons as a surprise gift from his husband, Will (Desean Kevin Terry), whom we never see. Morales plays Cariño, his Spanish teacher, who resides in Costa Rica. Adam and Will have a palatial home in Oakland, California, where Adam, who doesn’t work, has a very specific morning routine.

His main concern on this first day of class is how he will fit in these lessons. He already speaks Spanish very well, but he has been lamenting the fact that he wants to improve, so Will engaged Cariño to make that happen.

At the time of the second lesson, Adam is still in bed, incoherent and bereft. A tragic accident has befallen Will and Adam can’t cope. As the weeks and months go by, Cariño is instrumental in helping Adam regain his strength --- and improve his Spanish. All is well until Cariño reveals a shock of her own.

When there are only two actors in a movie, it is paramount that the writing --- and said actors --- be outstanding. It is particularly important here, as the two characters are in different countries communicating online. They are never in the same room together.

Duplass and Morales have been friends for a few years. Morales had directed Mark’s wife, Katie Aselton, in an episode of his show ROOM 104, so he was aware of her abilities. When he conceived the idea for LANGUAGE LESSONS, he contacted Natalie, who immediately agreed to collaborate. Each wrote their own part, then came together to complete the screenplay.

It’s not easy to maintain interest in a 91-minute production with only two participants, but Duplass and Morales have definitely managed successfully. As these two individuals, Adam and Cariño, become closer and closer, it’s remarkable how the audience experiences their bond --- and the depth of their love.

The dialogue, some of which was written while other parts were improvised, is so very real and believable. Cariño helps Adam through some of his darkest hours, and when he is finally feeling better, he wants to repay her in some way. Of course, she refuses all his entreaties, setting the stage for some conflict.

But through it all, LANGUAGE LESSONS keeps us captivated. It’s a wonderful exploration of relationships between women and men which can remain platonic. For that reason alone, LANGUAGE LESSONS is one of the best films of 2021.

It doesn’t have a sexy title, it’s not a summer blockbuster, special effects are non-existent and the abbreviated cast --- all two of them --- are not necessarily household names. But what LANGUAGE LESSONS does have is one of the best-written screenplays anybody could want, and its two stars offer magnetic, unforgettable performances.

When I see a small movie like this, I harken back to 2015 when another smallish film entitled ROOM was my favorite of the year. I feel the same way about LANGUAGE LESSONS. Starring and written by the team of Mark Duplass and Natalie Morales, with Morales directing in her feature-length debut, LANGUAGE LESSONS is the type of story you can’t easily dismiss, and it should, at the very least, be considered as a candidate for Best Picture.

Adam (Duplass) is a gay man living with his husband Will. They clearly live comfortably as witnessed by the beautiful home we see. As a surprise gift, Will buys 100 Spanish lessons for Adam courtesy of a pretty, young tutor named Cariño (Morales) who lives in Costa Rica. But tragedy strikes and Adam and Cariño form a special bond while chatting online in Spanish and English.

There is nothing more to reveal on the synopsis side of this film. But who could have known that Will’s gift would provide Adam with something no amount of money can buy? LANGUAGE LESSONS is an unexpected treat. It is heartwarming for mature moviegoers and not a bad way to pick up a little conversational Spanish. Also, it makes the point that we should not assume something based on mere physical observations. We have a good idea where the story is heading, but we are never completely sure.

Skeptics may ponder what a 90-minute film comprised wholly of online conversations between two individuals could possibly have to offer. There’s this: Morales and Duplass share a completely authentic chemistry necessary to pull this off.

I hesitate to oversell the virtues of LANGUAGE LESSONS. But if you pass on this film, you would be missing a wonderfully rich movie experience.