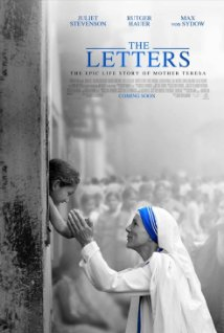 When one thinks of Mother Teresa, it is never about a tortured soul who believed God had abandoned her. But that is exactly what we learn about this beatified nun who was routinely revered by many, and won the Nobel Peace Prize in 1979 for her amazing work.

Born in what is now Macedonia, in 1931 she took her first vows as a Roman Catholic Loreto nun in Ireland. From there Sister Teresa (Juliet Stevenson) traveles to Calcutta, India where she hears a calling from God to venture into the slums to care for the poorest of the poor.

After many years of petitioning the Vatican to leave the Loreto order and begin her own missionary, it was finally granted by Pope Pius XII on October 7, 1950. So Sister Teresa became Mother Teresa and founded the Missionaries of Charity.

Writer/director William Riead has chosen to convey this exquisite story through the letters Mother Teresa wrote to her spiritual advisor and longtime friend Father Celeste (Max von Sydow). Father Benjamin Praagh (Rutger Hauer) is the Vatican priest tasked with the assignation of proving Mother Teresa's worthiness of beatification for sainthood. During his visit to Father Celeste, he learns a great deal about Mother Teresa through these letters, which span nearly a 50-year period.

"The Letters" is a beautiful and deeply moving tribute to the self-sacrificing Mother Teresa. Stevenson is phenomenal with her deft portrayal of a woman driven to do the work of God, all the while suffering from acute loneliness and self doubt.

For me, a practicing Catholic, this is the most startling element of "The Letters". One just doesn't associate these feelings and questions with the venerable Mother Teresa. But "The Letters" demonstrates to us --- people of all religions --- that God's calling is not often easy, but that a singular person, such as Mother Teresa, can make all the difference in the world.

It's not like Jeanne had to drag me kicking and screaming into the screening room to see a movie about Mother Teresa. But close.

It turned out to be a valuable movie going experience. Featuring a superb performance by veteran British actress Juliet Stevenson, "The Letters" refers to the missives written over a 50-year period by Mother Teresa to her long-time friend and spiritual advisor, Father Celeste van Exem (Max von Sydow). As depicted in the film, she described her extreme loneliness and bouts with losing faith, even as she cared for the poorest of the poor, primarily in Calcutta, India.

Her own early description of the unfortunates she cared for went like this:

"the hungry, the naked, the homeless, the crippled, the blind, the lepers, all those people who feel unwanted, unloved, uncared for throughout society, people that have become a burden to the society and are shunned by everyone." What Mother Teresa left out at the time were all the people afflicted with AIDS, a task she took on once that condition became an international plague.

She was awarded the Nobel Peace Prize in 1979, one of the more affecting scenes in "The Letters". She was beatified posthumously in 2003 for her extreme self-sacrificing in order to serve the poor and sick.

In one especially emotional moment in "The Letters", Mother Teresa assists in the birth of a breach child. This is significant because the mother, along with her husband, are part of the Hindu population who felt, as a Christian, she didn't belong in their country. When the worried husband hears the cry of his newborn child, and espies Mother Teresa leaving the crude tent that served as a hospital delivery room, her white and blue uniform covered in blood, he kneels at her feet in gratitude.

"The Letters" is not a flawless film. When Mother Teresa and her fellow sisters transform an old Hindu temple into a hospice so the dying people of Calcutta have a place of dignity in which to pass on, it becomes a huge bone of contention among the hardliners in the Hindu populace. But a brief intervention by a local administrator quickly quells the protest, perhaps a bit too easily, but convenient for the filmmakers.

Again, Ms. Stevenson is effective and credible in the role. And "The Letters" is worth viewing for people of all faiths.