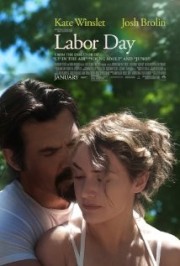 If the idea for a storyline of an escaped convict spending Labor Day with a divorced woman and her teenaged son sounds preposterous, then you'd be correct. Not having read Joyce Maynard's best-selling book, published in 2009, of the same title, I cannot write about what made the novel so compelling. Suffice to say, something must have been lost in the adaptation.

Jason Reitman, who is young and already has a much-ballyhooed career, wrote the screenplay and also directs. The cast he's assembled is impressive, with Kate Winslet starring as Adele, Henry's (Gattlin Griffith) mother, and Josh Brolin as Frank, the escapee. But, we all know from my past rantings and ravings, that a talented ensemble does not always pave the way for a great, or even good, movie.

"Labor Day" simply has too much stacked against it. First, and foremost, is the lack of chemistry between Winslet and Brolin. We are supposed to believe that Adele, a truly broken woman who depends on her son for everything, would permit a dangerous man to come into their home, even for one night. I realize she's not adept at expressing herself, but an unarmed man should have been easy to shake off. It might be plausible if, initially, there is even a hint of a sexual spark between them, since Adele is so terribly lonely, but, alas, there is not.

The script tries its mightiest to draw Adele and Frank together and make their sexual tension bubble on the screen, but it fails miserably. Whether they're dancing together on a hot, steamy night or baking a peach pie, a la the famous pottery scene from "Ghost", it doesn't matter --- there is no smoldering

intensity --- nothing that screams "Frank, take me away from all this" by Adele, which is what they eventually plan.

Henry, in the meantime, is struggling with his own issues of adulthood. His father, Gerald (Clark Gregg), is a dolt, who ran off with his secretary and is still trying to make it up to him. Henry has a crush on the new girl in town, who tries to enlighten him about adults and their sexual needs. Gag. Then, in one inexplicable moment, he tells this girl, whom he barely knows, about Adele and Frank's plan to escape to Canada with him in tow.

Reitman gives us one absurd scene like this after another. Everyone around this small town is searching for Frank, a known killer, but there he is playing softball in the backyard, doing repairs outside the house, dancing in the kitchen, all without fear of anyone seeing him? Of course, there are the requisite close calls, and the unnecessary slapping of a mentally-challenged child, but this is all in a day's crappy screenplay.

I was unmoved by "Labor Day". Adele and her many plights did not interest me. Nor did I particularly care if Frank remained free or not. Reitman may have some other winners under his belt, but this effort is a waste.

Director Jason Reitman has both hits ("Up in the Air", "Juno") and misses ("Young Adult") on his resume. He can now add "Labor Day" to his list of misses. Despite a cast featuring Kate Winslet and Josh Brolin, this movie lacks the tension it desperately wants to provide, and is loaded with too many plot flaws that sabotage the story.

Based on the novel by Joyce Maynard (I suspect the book was a whole lot better) who collaborated with Reitman on the screenplay, "Labor Day" tells the story of a single mom, Adele Wheeler (Winslet), who is confronted by a total stranger, Frank Chambers (Brolin), in a department store, and ordered to give him a lift in her car. Frank has already "commandeered" Adele's teenage son, Henry (Gattlin Griffith), so the trio leave the premises and ride away..

As suggested by her actions, Adele suffers from a form of agoraphobia (fear of public spaces) and rarely leaves her home. Her earlier marriage to Gerald (Clark Gregg) was decimated by a series of miscarriages, and her self esteem is at rock bottom. But rather than run away or shout for help in the store, she leaves with Frank --- brooding, bloodied but also quite handsome.

We learn that Frank is an escapee from a nearby prison, serving time for murder, but we don't learn the details of his crime until much later. Meanwhile, in only a few days time, the highly-articulate Frank fixes Adele's car, repairs a stone wall outside her house, and exhibits other handyman qualities. In one elongated scene, the best in the movie, he even bakes a peach pie from scratch. (Brolin, in real life, actually wanted to be a chef.)

Adele hungers for a relationship with a man, so it's not a question of "if", just "when" she will succumb to Frank's manly traits. The obvious conflict is that the local authorities are looking for him as squad cars patrol the area and wanted posters are stapled to trees. He's apparently a good guy who maybe got a bum rap, so we go along with Adele falling for him.

But the movie's aforementioned flaws occur mainly in the last segments, as Frank, Adele and Henry plan a move to Canada. SPOILER ALERTS: Adele's car is packed to the gills in plain sight in the driveway; as Frank continues his handyman chores, the front door is left unlocked so anyone can waltz in, like Adele's neighbor Evelyn (Brooke Smith), who espies Frank and is immediately suspicious; Henry blabs to a female school friend that the family is planning a move despite it being the first day of school; and finally, police sirens can be heard a mile away as they descend on the house --- why wouldn't they drive up stealthily to prevent another escape by a convicted felon?

But the real reason "Labor Day' doesn't click is the lack of chemistry between Frank and Adele. It's hard to fault the actors. After all, Winslet has been Oscar-nominated six times, and Brolin, his most recent role in the bizarre "Oldboy" notwithstanding, has built a fine film repertoire. So we'll blame it on the writing by Reitman and Maynard. The audience is simply not that vested in the fortunes of Adele and Frank.

In flashbacks, a young Frank is played by Tom Lipinski, who bears an uncanny resemblance to Brolin. There is also a totally needless scene involving Evelyn and her wheelchair-bound son which has nothing to do with the plot, and adds nothing to the hoped-for suspense at the end.

"Labor Day" is another reminder of how difficult it is to create a feature length thriller. Even Reitman himself said he had reservations about being able to make this movie comparable to the book. Looks like he was right.